Unter Schnee (Snowed Under) is an episodic novel composed of thirteen connected short stories. The action takes place in a small eastern European ski resort called Harrachov during the chaotic period following the fall of the Wall. Though the rapid process of “Westernization” has already begun making inroads into the sleepy town, traces of the defunct socialist regime cannot be erased from its residents’ memories or their way of doing things: The postmaster continues to “inspect” letters even if the old secret service has long since been deposed; a barkeeper blackmails a West German investor so he can finance a trip around the world; the last and only teen-ager in the town searches for a new identity over the internet; and finally there is Raik, a young entrepreneur who can’t get anybody to buy his store mannequins, because he was an opposition leader and still behaves as though he were an outcast.

Each of the many town’s residents and vacationers observe the two protagonists: Evy (from the East) and Vera (from the West) who have come to the resort for a weeklong ski holiday. Their relationship, already on the brink of collapse, threatens to break completely when the two find themselves unable to leave the mountain village during a snow storm. We learn about Evy and Vera through the alternating perspectives of a handful of town residents, each with their own story and each affected by the historical upheaval of the post-Wall period.

Though Strubel seems to be telling a love story, her topic is about the loss of nation and identity. Having lived through the rupture of a social system and country that suddenly disappeared (even if the people and places remained the same) Strubel, who was fifteen when the wall fell, observes the East / West friction through a double perspective—the failed utopia of socialism which she views with distrust, and an empty affluent west that she regards with skepticism. 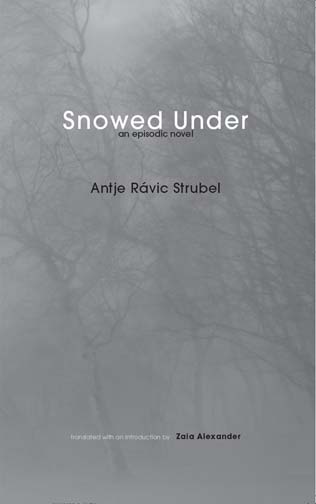