Notice: Trying to get property 'name' of non-object in /home/zdyjxh31i9ra/public_html/redhen.org/redhen/public_html/wp-content/themes/redhen/functions.php on line 191
 gossypiin Archives - Red Hen Press
Skip to content

This harvest of poems is inspired by the plant medicine latent in Gossypium Herbeceum, or Cotton Root Bark, which was used by enslaved Black women to induce labor, cure reproductive ailments, and end unwanted pregnancies. Through an arrangement of stories, secrets, and memories experienced, read, heard, reimagined, and remixed, gossypiin reckons with a peculiar yet commonplace inheritance of violation, survival, and self-possession. In this way, Ra Malika Imhotep invites us to lean in and listen good as the text interrupts the narrative silence around sexual harm, sickness, and the marks they make on black femme subjectivity.

Within these pages, the poet is joined by a “sticky trickster-self” named Lil Cotton Flower who tells of their own origins and endings in the Black vernacular traditions of the griot and the gossip. Interspersed throughout the collection, Black feminist wisdoms and warnings meld with the poet’s own yearnings and Lil Cotton Flower’s tall tales.

Gossypiin is an offering towards the holding and healing of Black beings that exceed the confines of their own bodies.

“gossypiin is an offering to the Black femme flesh that exists in and outside the parameters of gender. The poems in this collection reread the archive of the antebellum era, both the written and the gossiped, to point to the multiple forms of escape that Black femmes and their kin imagined and employed through the use of cotton root. In gossypiin, the American South is recognized as the geography that midwives ‘wild wimmin,’ Black femme subjects who turn to reinventing themselves as a fugitive practice. It is this shapeshifting that nuances the canon of trans and queer poetics. For Ra Malika Imhotep, Blackness cannot be detached from (un)gendering and transitioning. In fact, the collection proposes that when one moves ‘away from / woman,’ one will finally arrive ‘into the black’ / into blk / into wimmin / blk wimmin.” The ‘blk wimmin’ is the ancestor, relative, and future ancestor who teaches us to “come back often” to all that is ‘soft and black.’

gossypiin is a prayer for Black trans, queer, sick, disabled, Southern, and “girl-born” kin everywhere.”
—Alan Pelaez-Lopez, author of To Love and Mourn in the Age of Displacement and Intergalactic Travels: Poems from a Fugitive Alien

“Ra Malika Imhotep’s gossypiin is theory for living whispered in the ears of generations of Black folks feminine and women. In its attention to folk ways, the language of our people, it unearths an old tongue made new for us with every turn of a phrase, every means to survival and thriving. Imhotep demonstrates how “gossipin’ is a trickster technology . . . a Black feminist hypertext that registers the feeling of an experience of the world in which the self is an unstable plurality continuously unmade.” The word shifts and changes because we must. This book is a conjure of the Black women writers beyond this world and waiting in the next who have charted the path and made the medicine for us to be well. Imhotep’s careful ear listens good to what they have said and whispers it now to us.”
—Bettina Judd, author of patient.

“This book wags tongues, licks brown skin with peaches, tells tales, and dishes the dirt. Grounded in the growth cycle of Cotton Root Bark, gossypiin links Southern landscapes to black feminist lineage. (Br’er Rabbit be here. Zora Neale Hurston, Grandma Sarah & so many more.) Along with the avatar Lil Cotton Flower, Ra Malika Imhotep explores family history, confronts sexual trauma, and celebrates black femme resistance. “Wail / out a deep joy. Wet your face / with our common salt.” Read these words to recover the bodies of black women and femmes, to revere our bodies of knowledge.”
—Gabrielle Civil, author of Swallow the Fish and Experiments in Joy

“Ra Malika Imhotep’s gossypiin presents us with an elixir, blending us with our recent past and our strange present. We can’t begin to imagine the emotional and psychic reality of what has happened in the spaces between our current moment and the past 600 years. What we have are records told in breath passed down with love lilting on the tongue like a prayer. What we have are segmented borders and dizzying self-immolating desires sometimes. Imhotep is aware of this and moves us back to breath, back to scars and love poured into the earth. Imhotep acts as Circe, placing our hands into the hands that gingerly unearthed medicinals that gave our Black ancestors autonomy over their bodies. Throughout the book we experience glimpses into how care and joyful sensuality coexist with heartbreak and betrayal, and how these dualities make for creation.”
—Jasmine Gibson, author of Drapetomania and Don’t Let Them See Me Like This

“Between choral prayer, prey, and Black spectral shadows, Ra Malika Imhotep’s gossypiin offers us a countervailing softness as remedy, relic, and blooming incision. A lushness propels itself, and Imhotep gathers textured reams and worlds of form and braids them to create a tableau where fragrant possibility rests in the seams, right next to all the specters. Zora Neale Hurston, Audre Lorde, Ntozake Shange are lit sightlines or new desire lines, assembled in a multiplying and interchangeable triumvirate. gossypiin is sinuous and lithe and agitates time—jostles it, touches it, won’t let it sit still. In these newly created arrangements, we come to hold the relics and the residue of today, of yesterday, of last century, and of some future side by side. An incantatory circular logic unfolds then brims with the remembrance of the possible ways to imagine “What else might surrender mean?”. Let this question rest here among the many questions within this collection that act as window and channel to a resurrected space.”
—Asiya Wadud, author of Crosslight for Youngbird, Syncope, No Knowledge Is Complete Until It Passes Through My Body 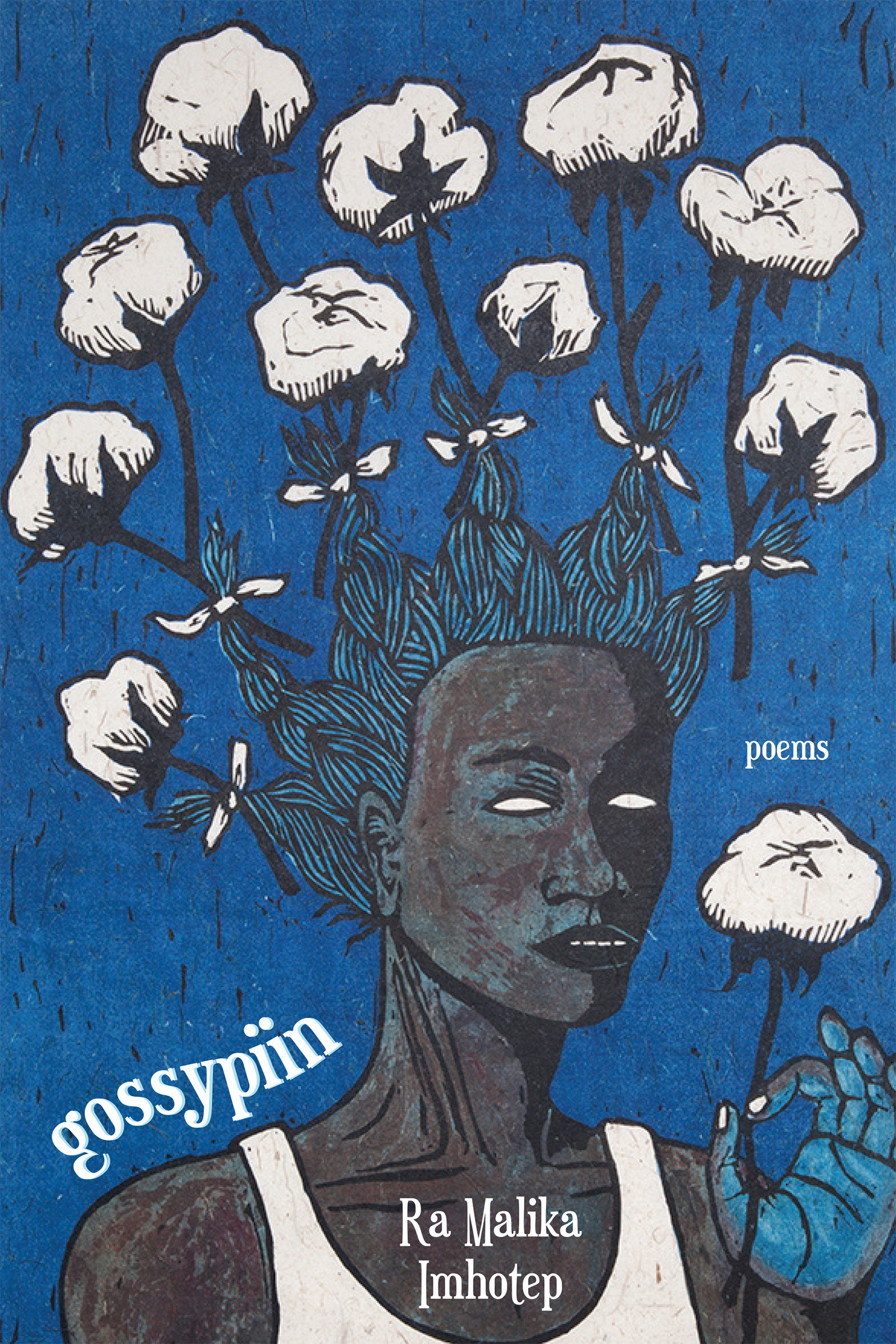