Original Grace is the last book in the Snake Quartet. In it, the journey from destruction leads through the darkened rooms of an enormous house where occasionally outside the windows creatures past, present, and future appear—asking for help or solace or trying to break the glass to get in. But the house is made of poetry and is unassailable unlike those who live in it.

By this time, Snake has undergone the transformations from sole survivor into the mythic voice of the collective with all their throats open and in full song. She has undergone the movement from original gender into all genders. The rough linguistic artifacts left from the first book—the dialects and fogginess she experienced living both in and out of a dream—slowly become more coherent as she learns to filter the collective voices back into her personal speech. Original Grace is not just the end of what was but the beginning of what comes next. The sun has gone down. The long wait for a new sunrise is nearly over.

“In Original Grace, the amazing conclusion to the Snake Quartet, Gary Lemons has found a deep syntactical pulse in the language that mixes witnessing with hallucination—arching across this series of books, I have to observe that the imagination working here is not only compassionate but weeps for us all. And yet the passage through imagination lifts us in just the way Blake intended when he took a large rake to the King’s messenger. I love these insurrections of mind. Taken as one book or as a whole the Snake Quartet is a relevant and signal accomplishment. Praise no blame!”
—Norman Dubie, author of Quotations of Bone 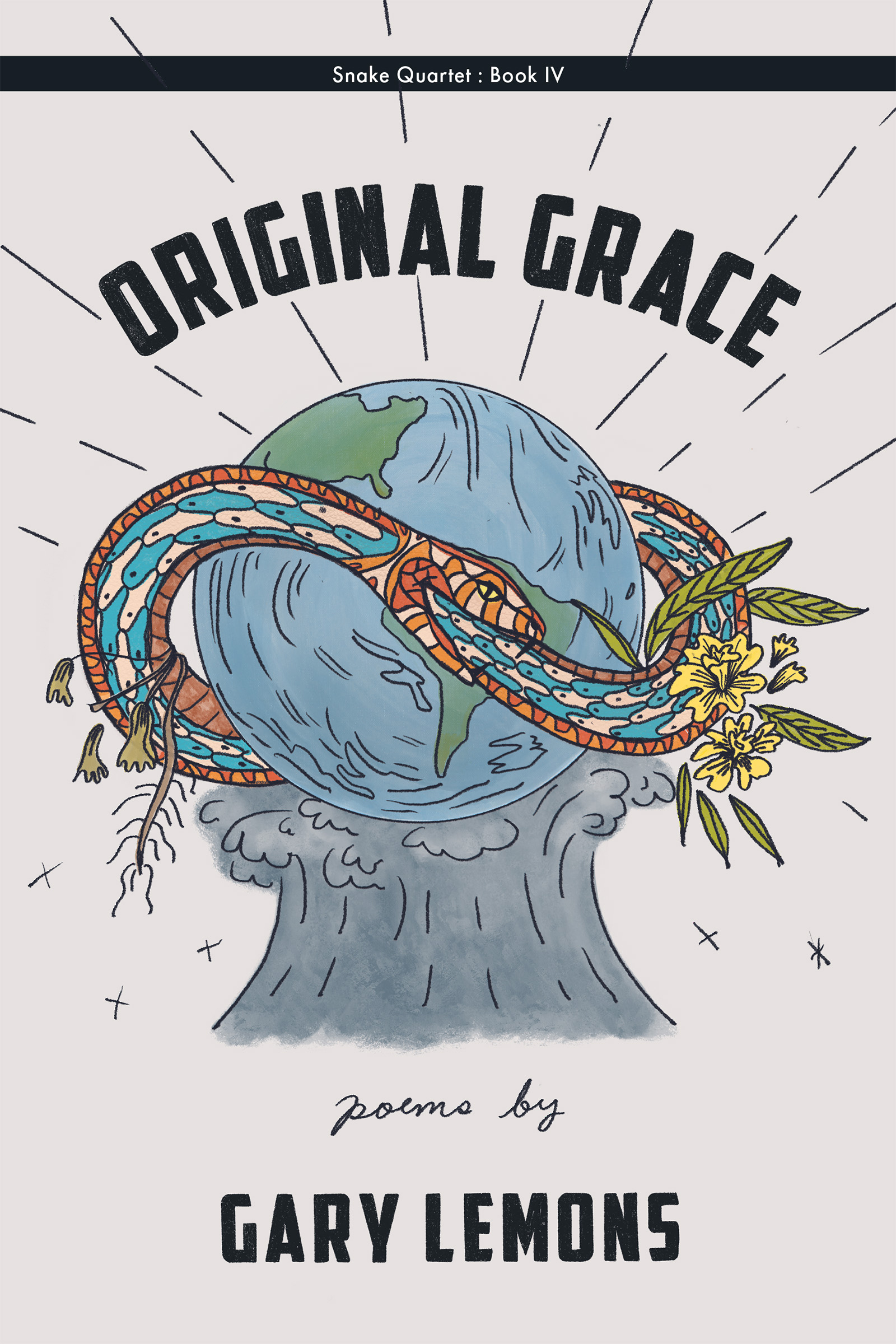 Second Wind introduces two themes that run through the rest of the Quartet. The first has to do with consumption of things at the expense of things. Appetite, or eating, always happens at the cost of a life or lives. For everything fed some thing dies to feed it.

Appetite takes other forms as well—perhaps not physically fatal but morally or spiritually deadly. Greed for something another owns. Desire for land or possessions. Worth determined by compulsive gathering. Possession and marketing of freedom. Denial of creative expression. These forms of appetite happen in every family—in every country—clinics and hospitals are filled with both perpetrator and victim.

The second primary theme is the idea that thoughts, imaginings, made objects, past events, inert forms, mythical narratives, rumors and beliefs have an actual life and that our history is always incomplete if it doesn’t recognize these are real. The idea of history in Second Wind presumes nothing disappears but is continued in a non temporal reality shifted slightly out of phase from current experience.

These two themes are not far apart since most of history—if not all of it—is fiction. Having been chronicled it immediately becomes an interpretation. It becomes a lie that has power and lives among us often masquerading as truth. And lies are the highways appetites travel between victims.

Snake discovers nothing so little resembles glass that it can’t be broken. Then reassembled through the grace of listening. Second Wind is snake driven into poetry by the thoughts, myths, dreams, gods, demons and all the fictional events and voices that live on even after the bodies that housed them disappear.

“Gary Lemons in this heroic passage through an intense personal mythology is working what Carl Jung might have labeled a real time archetype, meme of the tribe in an attempt to explore the darker humus of text. It is a fabulous and brilliant extension of something like Theodore Roethke meets Philip K. Dick. Gary wants to extend our sense of the lyric sacred aria and yet it is all a picture book that one could lovingly bring to the children’s hour. This is a wonderful book.”—Norman Dubie

“To read Snake: Second Wind is to ride the very tip of the artist’s wet brush—the voice is that fluid, the energy of creation that close. We are moving and we are moved by these lines that can become anything, high, low, mythic, sacred or profane. And when the brush lifts we find Gary Lemons has painted a faithful and devastating likeness of humankind, as destroyer, survivor, consumer, debaucher, mother, liar, and storyteller.”—Kathleen Flenniken

“Through the deranged, visionary, abject voice of Snake, Gary Lemons would have us keep facing the suffering in which we remain complicit. Emptying and filling with power, these eerie poems are spoken by a flickering, remnant throat, mythic and lost, wildly charged with what does not have to be.”—Joanna Klink 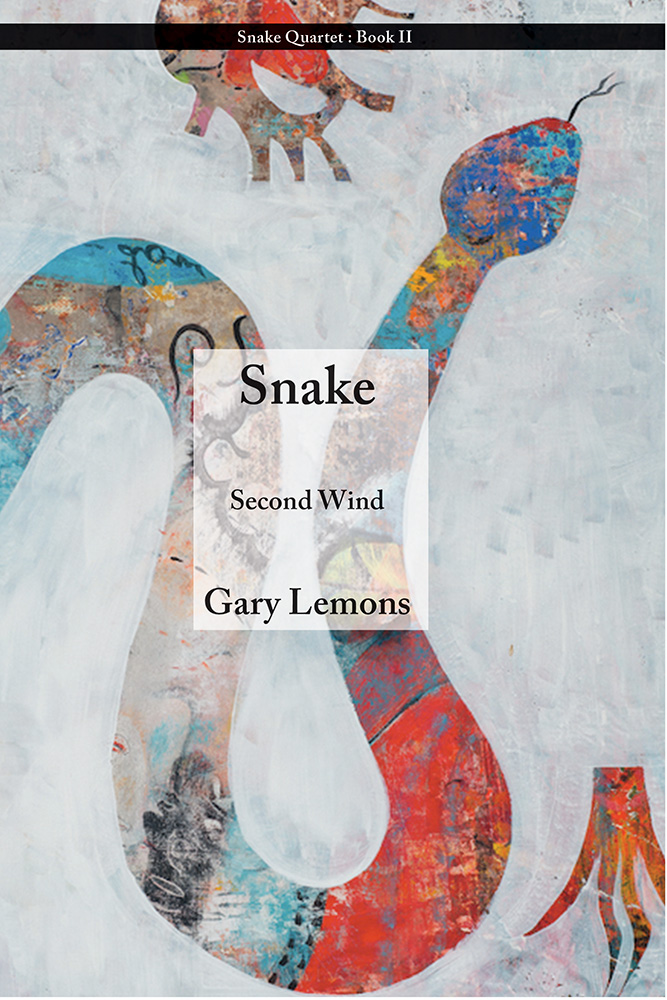 In Snake, Snake is the last thing left alive. He’s all that remains of our voices. The bodies of all living animals and plants have escaped down the Dreaming Way, leaving behind a residual ego trapped inside Snake: the sole survivor the Earth must destroy to complete the cleanse and start over. All that is gone–all that has been reduced by fire and ice and the other dynamic retributive forces of Earth–lives on in Snake. Snake is the extracted limbic brain removed from the collective consciousness and hunted across an emptied landscape. Snake is the bad ass reptile holding back the end of time by sticking himself into the spokes of Samsara. Snake is a single narrative sequence, a frontline account of pursuit, avoidance, and even friendship, forged in the heat of struggle.

“In Gary Lemons’ Snake, his amazing new book of verse, we encounter the future, present age of the Draco-Mother-Naked-of-Last, complete with the revenge of Milton’s Satan on the collective purity of planet Earth. Not since the white-face ventriloquism of Berryman’s Dream Songs have I seen such challenges made to the questions of what is voice, what is dream–brilliant book!”—Norman Dubie

“In this new collection, Gary Lemons–the poet of the creaking fishing boat, the mountains over Kodiak, the ‘throats of grasses’–speaks, through the narrative consciousness of Snake, in nothing less than the fractured memories and voices of species slowly going extinct. A mournful dirge for what has been lost, a dreaming song for what could yet remain, Snake is an avian, reptilian, piscine–and, yes, mammalian–howl in an era of fracking, tar-sand extraction, and calamitous climate change. These poems are wise, beautiful, and necessary.”—Jordan Hartt

Snake III: the Hunger Sutras is the third book in the Snake Quartet. By now snake has carried the lost voicesfrom the smallest single celled whisper to the bellow of more complex creatures as she wanders the empty Earth. Thousandsmaybe millions of yearslistening–while also searching for the clues in the ruins that when puzzled into insight become the beginning movement in the opera of life returning. The clues are fossils embedded in the archeological remains of stone and airfire and rain. All that is left. Except for snake.

“Reading Gary Lemons’s The Hunger Sutras, you will enter a dizzyingly visionary head-space, and you will feel your skull crack, ear imp, spirit throb. Expect to be transported at vertiginous speed to an apocalyptic post-modern world where ‘naked angels / [Lie] in the sand like industrial debris’ (re-see: the paintings of Bosch and Bruegel the Elder), this wondrous topsy-turvy, twisted, gnarled-up world (O Revelation) where ‘melodious ashes fill the air,’ this ‘compost pile’ realm of the tail-flailing snake, Lemon’s own re-invention of the Damaballah of Haitian vodun but with a Buddhist twist. Be convulsed, be transmogrified by snake’s prophecies, by snake’s obfuscations, by snake’s teasing secrets’O, indeed, allow yourself to be enraptured by snake’s riddling words, by snake’s shape-shifting thoughts, this animal shaman ‘befriender of the dead,’ this trickster that dwells in the here and the there’omniscient as an ‘atom in an eye,’ this roving seer that seeks after truths (the many, never the few) and like some avenging angel ‘detonates all the lies she’s ever / Been told.'”—Orlando Ricardo Menes, author of Fetish and Heresies

“Gary Lemons’ third book, the Hunger Sutras, advances his brilliant quartet and is something very surprising like James Merrill meets Robert Bly. This book, though, is in no way derivative it is, and this is my point, utterly original and, if this is possible, it’s also a warm-hearted puzzlement. This work serves as an illumination in a time of great darkness. Wonderful!”—Norman Dubie, author of The Quotations of Bone. 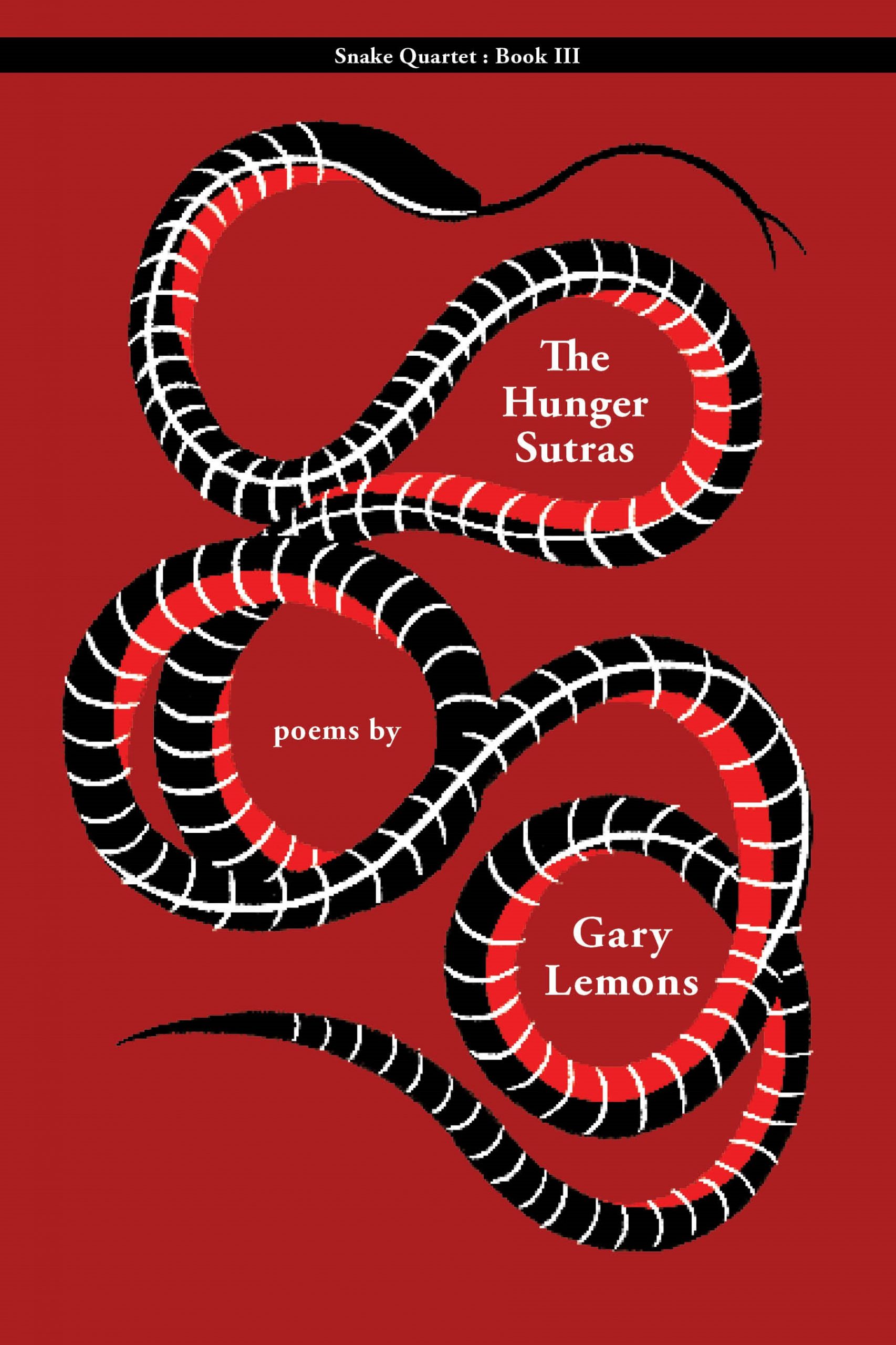