Welcome to the peculiar and headlong world of Brian Doyle’s fiction, where the odd is happening all the time, reported upon by characters of every sort and stripe. Swirling voices and skeins of story, laughter and rage, ferocious attention to detail and sweeping nuttiness, tears and chortling – these stories will remind readers of the late giant David Foster Wallace, in their straightforward accounts of anything-but-straightforward events; of modern short story pioneer Raymond Carver, a bit, in their blunt, unadorned dialogue; and of Julia Whitty, a bit, in their willingness to believe what is happening, even if it absolutely shouldn’t be.

Funny, piercing, unique, memorable, this is a collection of stories readers will find nearly impossible to forget. Along the way, readers will meet:

… The barber who shaves the heads of the thugs in Bin Laden’s cave tells cheerful stories of life with the preening video-obsessed leader, who has a bald spot shaped just like Iceland.

… A husband gathers all of his wife’s previous boyfriends for a long day on a winery-touring bus.

… A teenage boy drives off into the sunset with his troubled sister’s small daughters . . . and the loser husband locked in the trunk of the car.

… The late Joseph Kennedy pours out his heart to a golf-course bartender moments before the stroke that silenced him forever.

… A man digging in his garden finds a brand-new baby boy, still alive, and has a chat with the teenage neighbor girl whose son it is.

… A mountainous bishop dies and the counting of the various keys to his house turns . . . tense.

Only two men in this sweet bruised world know that Osama bin Laden, son of Alia Ghanem and Muhammad bin Laden, has under his turban a sprightly crewcut modeled on Van Johnson in the 1954 movie The Last Time I Saw Paris, which, as only a few other men know, is his favorite movie, or used to be before he had to give up electronics for various excellent reasons. I have also heard him say, more than once, as I cut his hair, that The Caine Mutiny with Van Johnson is his favorite movie, so I think we may conclude safely that his favorite movie is one in which Van Johnson is a featured player, although it may be that Osama, all due respect to the Vanster, has a thing for crewcuts rather than cinema.

Also I am here to tell you that Osama has a bald spot the size of a baby’s fist on the back of his head, shaped exactly like Iceland, complete with the Vestfjarda Peninsula to the west. He does not like to speak of this and indeed we have only spoken of it once, when I said to him, sir, you have a bald spot back here shaped like Iceland, and he said I do not, and I said, yes sir, you do, it is the size of my fist and even has the little peninsula to the west, you know, like Iceland does, and he said I do not have a bald spot, and I said, yes sir, well sir, actually yes you do, sir, it’s a big honking thing, too, and I remember learning the names of the towns in Iceland for extra credit when I was in school, many years ago, Borgarfjardharsysla and Eyjafjardharsysla and Hafnarfjordhur and Isafjordhur and of course Snaefellsnessysla-og-Hnappadalssysla, is that a cool name or what, who could forget such a name, and the fact is that your bald spot is really amazingly like Iceland complete with the Vestfjarda Peninsula to the west, so maybe we should be discussing a hair weave? Sir? 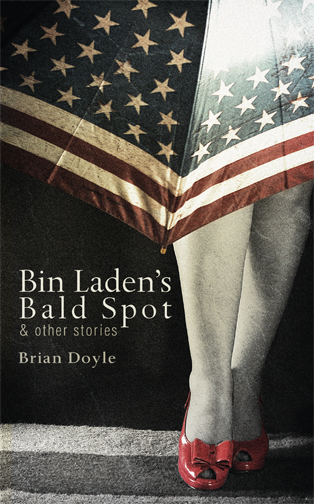 Lee Polevoi of the Los Angeles Review of Books says that, "Bin Laden's Bald Spot encompasses worlds of absurdity and quotidian reality in the voices of ordinary citizens. Underneath the […]

Shelf Awareness, the popular daily e-newsletter, recently ran a review of BLBS, the new short story collection from Brian Doyle: "This is vintage Doyle, and it doesn't get much better. […]