Blue Etiquette: Poems is a vividly imagined and inspired conversation between the poet and Emily Post about the rarely seen working lives of American women and tense interactions between the haves and have nots.

When Kathleen Driskell pulled an old edition of Emily Post’s Etiquette from the used bookstore shelf and blew dust off the blue linen cover, she instantly found herself and her family within those pages??not as the Worldlys, Oldlineages, or the Gildings (archetypes Post created to demonstrate how to properly manage a grand house full of servants), but as the housemaids, cooks, and useful men working for those very rich. The noted poet–whose collection Seed Across Snow was twice listed as a national bestseller by the Poetry Foundation–explores class, the workplace, and those tense interactions between the haves and the have nots in her new collection. As America watches its middle-class quickly decline, Blue Etiquette rings with relevance.

“In Blue Etiquette Kathleen Driskell has drawn back the curtain on the gracious, if not always the good, members of polite society and shown us the hazards to those in service who do not attend carefully to protocol. From Emily Post’s 1922 Etiquette, she has recovered rules for survival in a world where distinctions between the classes are sharp as the razor’s edge of a bone-handled fruit knife, polished to gleaming for ‘its own strange work.’ Violating the commandment that ‘what we see, we rarely ever say,’ she bears witness to those whose job it is to keep silent–country club groundskeeper, head waiter’s assistant, nursing home aid, laundry woman. In narratives of service and suffering, Driskell gives us poetry that sings like silver, bright and dark in its rich patina.”—Lynnell Edwards, author of Covet

“Blue Etiquette simmers with discord between constraint and escape, creating an ambience of domestic complexity à la Mad Men away from the firm–‘cigarette smoldered in the pink melamine ashtray’–capturing and deconstructing not only a period, but a worldview. Driskell acknowledges the light generated by moments of subtle grace, but also grapples with the nuanced darkness that accompanies such instants. Blue Etiquette is a coming to terms, in the face of complicated and sometimes raw-nerved lives, with what, if any, transcendent verity might be perceived between private life and decorum.”—Adam Day, author of Model of a City in Civil War, selected for The Linda Bruckheimer Series in Kentucky Literature, Sarabande Books

“I enjoyed no new book of poetry last year more than Kathleen Driskell?s Next Door to the Dead, a collection by turns poignant, funny, and macabre. Blue Etiquette, the poet’s fine follow-up, steps back–just a step, and only for a while–from the real-estate deals of the dead, focusing instead on the brokered mortgages of the living. In a throng of voices, these poems consider the vacuously bedecked Haves at High Tea and the gnawing felicities of the Never-Wills who serve them. Always at the book’s center the fragile bond of family, guarded at a cost. Always the threat at the door, cunning or obtuse. There’s a hunger here that can’t be named or sated. Driskell has created a poetry of Kentucky expanded to the size of a mournful country, an etiquette guide to convince us all will be well in a world that’s not.”—Gaylord Brewer 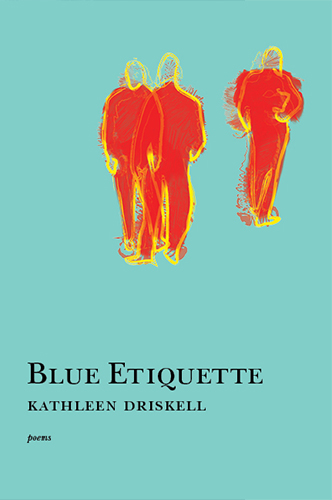