This is the personal story of the life of Blase Bonpane, a vanguard practitioner of liberation theology and a former Maryknoll priest.

In the wake of the Second Vatican Council 1962-1965 many religious people, especially those serving in Latin America, began to understand a spirituality that transcended sectarianism. Having come from an upwardly mobile Italian American family marked by Southern Italian anti-clericalism, Blase was accustomed to hearing his parents express real differences with their institutional church. He went into the seminary despite the avid protests of his parents.

Blase’s odyssey takes us from his high school and college years, through his service in Guatemala during a violent revolution, to his expulsion from that country for “subversion.” After receiving gag order from the Church, which he could not in good conscience accept, Blase met with the editorial board of the Washington Post and released all of the material he had regarding the U.S. military presence in Guatemala. This action led to his separation from the Maryknoll Fathers.

Blase accepted a teaching post at UCLA. While serving in academia, he met the former Maryknoll Sister Theresa Killeen, who had served in Southern Chile. They married in 1970. Their adventures include working directly with Cesar Chavez at his headquarters in La Paz, California, building solidarity with the Central American Revolution, forming the Office of the Americas, working in the forefront of the international movement for justice and peace, and raising two children.

Blase worked on the ground for international peace in Mexico, Guatemala, El Salvador, Nicaragua, Costa Rica, Honduras, Panama, Colombia, Ecuador, Cuba, Japan and Iraq. He led the U.S. contingent of the International March for Peace in Central America from Panama to Mexico in 1985-1986. 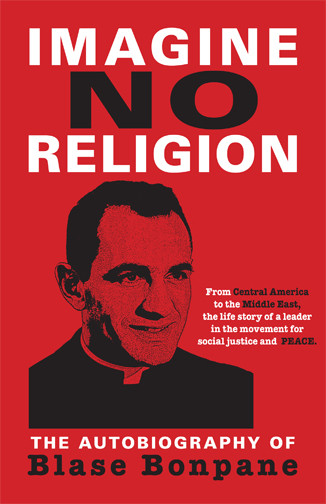 In a recent Catholic Books Review article, Arthur J. Kubick had this to say about Imagine No Religion: The Autobiography of Blase Bonpane – "This fascinating autobiography takes the reader […]

In reading Imagine No Religion Kirkus Reviews appreciates that "reading Bonpanes memoir is like exploring a mini-history of liberal activism over the last 45 years." Throughout the book, Bonpane (Civilization […]