As a child Natalia goes fishing with her father, Walker, but spends more time humming songs than catching fish. When Walker comes upon Natalia sitting beside a stream, he hears her singing and asks what the music is. Natalia tells him that it’s the music she hears in her dreams, music she wants to write and perform.

So begins into the silence: the fishing story, America Hart’s genre-bending, time-warping debut novel. Natalia does become an accomplished musician, but even with her father’s encouragement, she struggles with her family, especially her younger sister Nadine, to be understood. She sets off on her own, dropping out of school and following Dan, a ballet dancer, to his new job in a new city. There, too, she encounters obstacles to her creative vision.

Throughout her journey, Natalia and her father are visited by apparitions of Walker’s mother, America, and his grandmother, Anastasia. Their stories are told through diaries found by Natalia and Nadine; reading them, the two sisters make surprising discoveries about their family’s history.

With echoes of Woolf, employing structures found more commonly in art music, into the silence weaves together voices and motives, past and present, into a haunting, polyphonic song of striking and original beauty.

Praise for into the silence

“This is the overlooked childhood of wonder and barely suppressed terror, the death of a wriggling fish against a rock, a father who won’t speak to his daughter after she cuts her long hair, the ferocious need to extend out of yourself and into another, the haunting image of a woman singing a sad song alone in a meadow, overlooked because we’ve forgotten what America Hart knows so well: that the small, the incomplete, the ephemeral are all we have, despite the world’s bluster. She’s written a mesmerizing novel of womanhood and song as powerfully affecting in its own way as Alice Munro’s Lives of Girls and Women.”—Scott Blackwood, author of See How Small, winner of the 2016 PEN Center USA Award for Best Work of Fiction

“The writing takes you over like a chant or haunting pulses from childhood. Beautiful, like a piece of forgotten music brought back to mind.”—Tessa McWatt, author of Dragons Cry 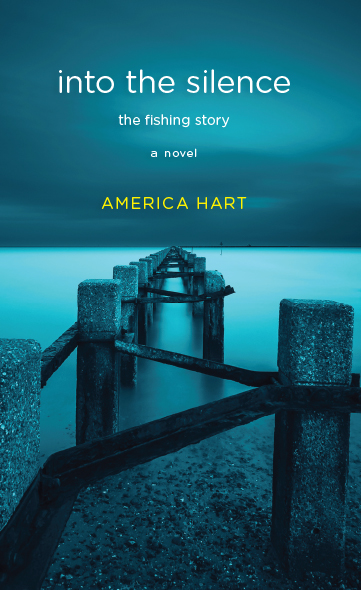 into the silence: the fishing story” was a chosen finalist for the 2015 USA Best Book Awards! “

America Hart's into the silence: the fishing story (Red Hen Press, 2014) was chosen as a finalist in the Cross-Genre Fiction category for USA Best Book Awards! Congrats to America! […]

Barbara Hoffert of Library Journal places America Hart's into the silence on the Top Indie Fiction: 15 Key Titles Beyond the Best Sellers List for Fall 2014. She writes that […]