The poems of Later the House Stood Empty steam up from the banks of the Río de la Plata, exploring its history-personal, political, and geological from the tip of a dinosaur tail found on the beach and the expeditions of Darwin to the lingering devastations of the 1970s military coups. Their speaker straddles two worlds: between Argentina and Uruguay, between Buenos Aires and the small town of Colonia, at once of this place and passing through, both foreigner and daughter of the river. In short lyrics pared down to what is left when love and hope have gone, Draper documents overlapping layers of time, stitched together by desire, beauty, longing, tragedy, and loss.

“Melina Draper’s wonderful poems recall the author’s magical childhood and adolescence in South America. Blending the personal with history, they are populated with fascinating characters, including the eccentric and engaging street people of Buenos Aires and Montevideo, a mysterious photographer-lover, and the youthful Charles Darwin on the loose in a scientifically uncharted continent. Darwin, who turns up a number of times, gives a foundation in the deeper past to this work of memory and nostalgia. With its arresting lyricism and formal craft, Later the House Stood Empty brings a stirring new voice to contemporary American poetry.”—John Morgan

“Any minute now I will rise up and fly above the town” is a line from Melina Draper’s new collection of poems that accurately describes how I feel as I read and reread this wonderful book. Later the House Stood Empty crosses borders, over the river and back again, where imagination and reality are neighboring countries. These finely wrought poems are both explorations and evolutions as they consider inner and outer landscapes, love and history. How perfect that Charles Darwin is one of the characters who travels these waters and languages with us, discovering.”—Derick Burleson

“In this engrossing collection of skillfully wrought poems, both free and formal, Melina Draper takes the reader almost forcibly into her life, to be surrounded by complex memories and images: the natural landscapes of South America’s la selva at its most inviting and disquieting and, with equal ambivalence, the teeming city of Buenos Ayres. Charles Darwin informs the journey through quotations from his notes, and characters from the history and folklore of the continent shed their own light on its realities. Half-told personal stories, dreams and near-confessions flicker through these poems, as indeterminate shapes may appear and disappear through dense flora, or faces on an urban street. Events and fantasies are not wholly distinct, but mingled, as languages are, or past and present in the mind, or the identity of the deracinated who briefly return home. It’s miraculous how a book with such disparate contexts coheres into a strong, individual response to the dislocating experiences of the person with memories of life lived elsewhere. I loved it for that, for the oddly familiar strangeness of its dogs and street vendors, its casual violence and distanced family portraits.—Rhina P. Espaillat

“Melina Draper treats the reader to a richly textured history of her early years in South America. She enhances the experience with all the senses, and everything crackles, gleams, shimmers, hums, and explodes with life. The first stanza of “Mouth of the River” opens the book with a hint of what’s to come:

Crackle and spit of fat on grills,

I was a visitor in his country, too.

There are poems of adolescence and natural landscape. Each venue opens up a world for us, allowing us to peek into wanderings and experimentations. At times, the two come together in cityscapes, as in “Spitshine,” a poem inspired by a line by Sapho and translated by Ann Carson, paraphrased here in the italicized third line:

Moths and beetles court the street lamp on the corner.

I sit there into the wee hours writing.

I am his sweet bitter unmanageable creature,

jasmine-scented apparition who steals into his loft late.

He kisses me hard, he pinches me.

At other times, the landscapes mesh in a mélange of sensuous details. Bitter tea and forsythia, graffiti and tart oranges, caves and cannonballs, fossils and creatures of the deep, two men dancing cheek to cheek and a night blooming cereus all heighten the adventures.

There are political poems too. In “The Protest, 35 Years”, Few mothers still march/around the Plaza de Mayo obelisk/seeking who was taken from them,/who was disappeared. But these few are in the background. Nevertheless, the title poem is a quick look at the AIDS crisis; clearly a tender observation of a personal experience: Someone said AIDS./his sweet house,/his mother gaunt and diminished, at the door/mistook me for another.

What truly gives this volume a unique touch is the thread of quotations and remarks from the early voyages of Charles Darwin, whose words are scattered about the poems in italics. Draper acknowledges these lines from The Voyage of the Beagle and from the Darwin Correspondence Project. He is like a second poet, a silent mentor occasionally looking over Draper’s shoulder as she ruminates on her life. In some of the Darwin-inspired poems, Draper discusses many of his discoveries. In “Bier,” he noted/a breccia of bones, gigantic osseous armor,/toxodon and mastodon teeth, and one of a horse. Or perhaps a bit less expected lines in “Don Carlos on Spanish Women”: Tell me, have you ever seen women//more beautiful than in Buenos Ayres?

Mixing in Spanish words does not hinder the comprehension, and many readers of poetry will look up their meanings or simply skip over them.
“In Later The House Stood Empty” we see the poet looking back, not necessarily in the voice of a young girl, but instead in the mature voice of the learned poet.”—David Rachlin 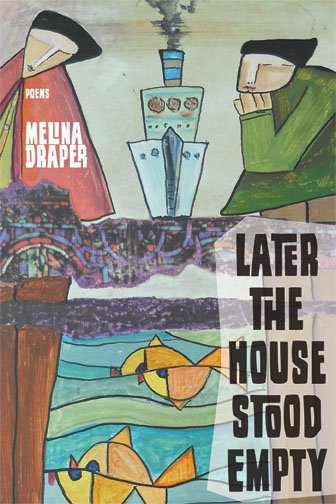