Ludlow is a novel in verse, meaning it has the speed, concision and accuracy of the best poetry, along with the expansiveness and character development of a novel. It tells the story of a handful of immigrants—Greek, Mexican, Scottish, Italian—in southern Colorado, climaxing in the Ludlow Massacre of April 1914, in which elements of the Colorado National Guard killed striking miners and family members.

The novel follows two primary characters: the fictional Luisa Mole, orphaned in the opening chapter, who must choose between life among the miners and the middle-class family who adopt her; and the historical figure Louis Tikas, a Cretan immigrant who, in the course of the book, becomes a labor organizer and a Ludlow martyr. But several minor characters—Too Tall MacIntosh, Lefty Calabrini, George Reed and his family, and even John D. Rockefeller, Jr.–also play significant roles in the book, which never succumbs to simplistic political pieties, but is engaged with identity and being.

The author also appears in the book, guiding the story in time, allowing us to look at events from the vantage point of the whole century, and to understand both the personal import of the story and the profound difficulty of ever knowing the truth about such events. In a sense, the characters are more grounded and real than he is, as he tells the story in order to hold onto his own identity in the West. The book ends long after the massacre, with America changed by more wars and upheaval, in a scene where Mason comes to know Luisa Mole more fully and imaginatively.

Ludlow is a searing story told with great art, and a major contribution to the literature of the American West. 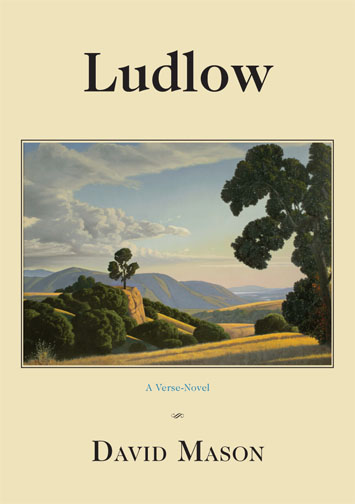