New Hope for the Dead features the best of Matthews’ remaining uncollected work, including over 30 poems spanning Matthews’ prolific but tragically cut-short career. But unlike the first two collections, New Hope for the Dead features Matthews’ unheralded talents as a short story writer, food writer and diarist as well as providing more cogent interviews, and witty and truculent essays. With subjects ranging from the Roman poet, Marshall, to Emerson’s life of leisure in the Adirondaks to Matthews’ old standbys—jazz, sport and the pleasure of friends—Mattthews proves to be an erudite, articulate and surprisingly versatile guide.

New Hope for the Dead features an array of favorite recipes, a series of candid photographs spanning Matthews’ career, letters from Matthews to his three closest literary friends, a bumpersticker recreated from an early small press collaboration and the final lines found on the poet’s desk the day of his death. This collection for all serious fans of poetry, literature, language, music and art. Just right for the reader of poets such as Tony Hoagland and Billy Collins as well as for the lover of literary biography and cultural criticism. 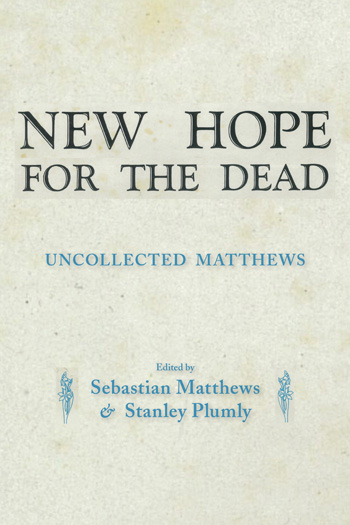 A Review to Die For!