For a couple struggling with infertility, conception is a war against their bodies. Blood and death attend. But when the war is won, and life stares, hungry, in the parents’ faces, where does that violence, anxiety, and shame go? The poems in Patter re-imagine miscarriages as minstrel shows, magic tricks, and comic strips; set Darth Vader against Oedipus’s dad in competition for “Father of the Year;” and interrogate the poet’s family’s stint on reality TV. In this, his third collection, award-winning poet Douglas Kearney doggedly worries the line between love and hate, showing how it bleeds itself into “fatherhood.”

“Where, oh where would we be without the dynamic intelligence and feats of lyric daring that Douglas Kearney’s work has delivered to American poetry? The poems in Patter run back and forth through the realms of private interiority, popular culture, and the vast public arena of history, all the while re-inventing what the poetic line is capable of bearing and baring. Completely and un-ironically alive with genuine feeling, these are poems that are not afraid to say and show how we matter to one another.”—Tracy K. Smith

“Because bodies matter, name, beget and conceive, Douglas Kearney’s Patter exists within the stall, the break, the miscarriage in bodies bothered by history, blood and breath. What is it to father the inchoate and the ineffable that exists in the life of the black family? Kearney’s exquisite poems dissolve our sight, force us to speak aloud, and compel us to hunt and find within the illogic logic of our lives. Patter is its own genius music—revolutionary, intimate and everyone’s.”—Claudia Rankine 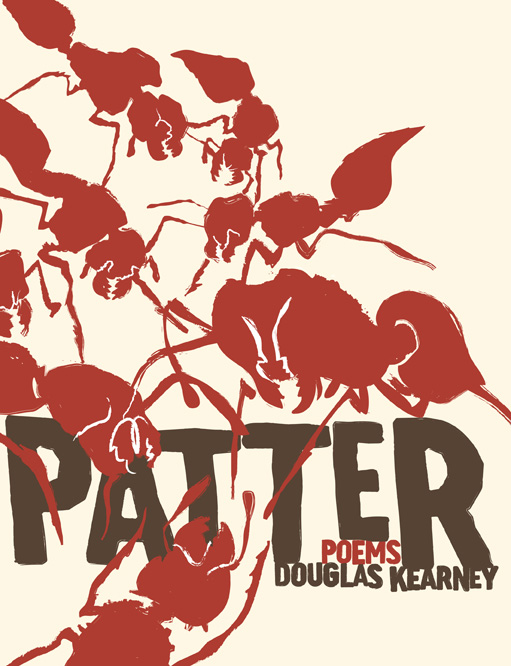 And We Shall March blog shared the news that Log Angeles poet, Douglas Kearney, just recieved one of the coveted 2008 Whiting Writers Awards, a $50,000 prize bestowed upon writers […]

Yesterday, The Commonwealth Club announced the finalists of this year's California Book Awards, and we are delighted that Douglas Kearney's poetry collection, Patter, is a finalist for the poetry award! […]

At first glance, Douglas Kearney's poems in his collection, Patter, consist of words clustered in impossible ways on the page, leaving the reader to wonder how they are read. Now, […]

In a decade of reading and writing about motherhood poetry—including an essay-review in these pages in 2019—I have found no universal truths about motherhood. However, as I’ve worked with poet […]

Patter is a top pick for Coldfront!

Coldfront Magazine recently revealed their top 40 poetry books of 2014, and we are thrilled that Douglas Kearney's excellent collection, Patter, is on the list! Here's what Coldfront's Diana Arterian […]

In a recent review on Monkeybicycle, Stefanie Wortman praised Douglas Kearney's unusual and exciting use of poetic form. "Kearney’s poems play with forms both visual and generic, drawing on the […]

KCET calls Douglas Kearney one of the most progressive poets writing in this age.””

Patter, the most important collection of poetry published this year””

Luke Fiddler of The Economy Magazine gives a glowing review to Douglas Kearney's new book, Patter. He states, "By all measures, Patter scrapes vertiginous heights; it’s a magisterial study of […]

Another Sonic Masterpiece” for Douglas Kearney”

Douglas Kearney's latest poetry collection, Patter, got an early review from blogger and The Rumpus poetry editor, Brian Spears, on his personal blog New in Des Moines. Spears describes the […]