Pause, Traveler is a journey through the dark heart of the American landscape, from New York City to Alaska. These poems search for redemption in the most unlikely places: Circus World Museum, an Iceworm Festival, a frozen gas station in Alaska. Traversing the difficult terrain of damaged relationships and misplaced affection, this collection finds hope in the fractured beauty of the world.

“Erin Coughlin Hollowell’s Pause, Traveler is a brave book, full of poems that find not much to hang onto in this shaky and often dark world, but they hang on anyway, with a fierce joy. Inside each of them is the tension of ‘a crust, a crypt, a bomb,’ but every day arrives new, with its hopes. There’s the Iceworm Festival in the dead of an Alaskan winter: ‘Heck, why not?’ she writes. A man with a brain tumor is crowned ‘Citizen of the Year,’ the Girl Scouts sing, and the night is lit from the inside. Reading these poems, I begin to be grateful for what’s cracked, what’s broken, and grateful for Hollowell’s eye that looks straight at it all, and makes of it these splendid, clear poems.”—Fleda Brown, Poet Laureate of Delaware emeritus, author of Reunion, winner of the Felix Pollak Prize

“The beautiful but often psychologically searing poems of Erin Coughlin Hollowell’s Pause, Traveler recall Robert Frank’s book of photographs, The Americans. In poem after poem, Hollowell draws portraits of the kind of nearly gutted American soul Frank saw as he crossed the continent to take so many of his famous portraits. Her careful predication, sharp lineation, and spare but agonizing imagery takes each poem far into the soul of a human being who is in hardscrabble transition.”—Kevin Clark, author of Self Portrait with Expletives 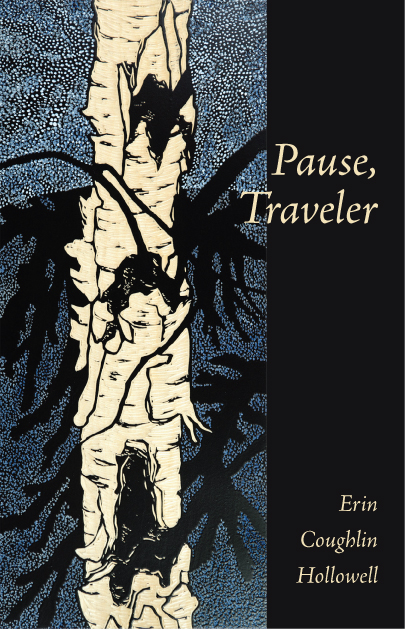