Calculated to reflect the sixty minutes in an hour of heightened imaginative contemplation, the poems in Ernest Hilbert’s first book, Sixty Sonnets, contain memories of violence, historical episodes, humorous reflections, quiet despair, violent discord, public outrage, and private nightmares. A cast of fugitive characters share their desperate lives—failed novelists, forgotten literary critics, cruel husbands, puzzled historians, armed robbers, jobless alcoholics, exasperated girlfriends, high school dropouts, drowned children, and defeated boxers. These characters populate love poems (“My love, we know how species run extinct”), satires (“The way of the human variety, / Not even happy just being happy”), elegies (“The cold edge of the world closed on you, kissed / You shut”), and songs of sorrow (“Seasons start slowly. They end that way too”). The original rhyme scheme devised for this sequence–ABCABCDEFDEFGG–allows the author to dust off of the Italian “little song” and Americanize the Elizabethan love poem for the twenty-first century. Speaking at times in propria persona (“We’ll head out, you and me, have a pint”), at times in the voice of both male and female characters (“I’m sorry I left you that day at MoMA”), at times across historical gulfs (“Caesar and Charlemagne, Curie, Capone”), Sixty Sonnets marshals both trivia and tragedy to tell stories of modern America, at last achieving a hard-won sense of careful optimism, observing “the last, noble pull of old ways restored, / Valued and unwanted, admired and ignored.” 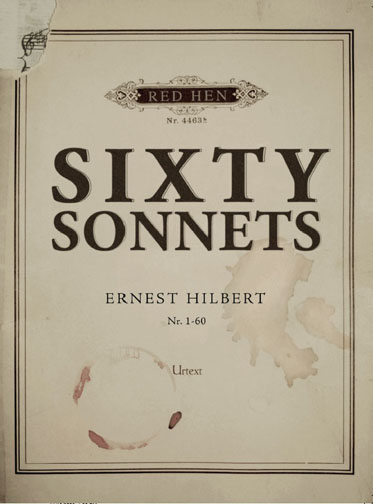 “Prophetic Outlook” [by Ernest Hilbert] Prophetic Outlook Crooks run the whole world, and the Dow just fell. Crap rules the airwaves. All your best plans stall. The air is dirty, and you don’t feel well. Your wife won’t listen. Friends no longer call. Sad songs from youth no longer cast a spell. Cancer research has […]

Review of Sixty Sonnet in BookSlut

The sonnet is an enduring lyric monument, one of the few postclassical forms that refuses to die. Almost every major poet writing in a Western language has attempted to stand upon “its scanty plot of ground,” and this “little song,” with its fixed formal patterns, has continued to cross boundaries of style, nationality, race, language, […]

Sixty Sonnets, Reviewed by Maryann Corbett One look at the cover of Sixty Sonnets lets you know you’re dealing with a poet who’s got both slyness and chutzpahâ€”at least if poet Ernest Hilbert and cover designer Jennifer Mercer worked closely together, and the acknowledgments suggest that they did. The cover design parodies the staid, pale dignity of […]

“the only other poet who plies risk against reward so deftly is Pound.”

Strong Verse reviews Ernest Hilbert’s Sixty Sonnets. First let me say that Ernie Hilbert is a sneaky bastard for including the Bauman’s Rare Books Catalogue in the package that delivered his excellent sonnet collection to me. As I am a poor poet and teacher, I include the link in the hope that if I have more […]