Chris Tarry holds an MFA from the University of British Columbia, and has been published widely. His fiction has appeared in publications such as The Literary Review, On Spec, The GW Review, PANK, BULL, and Monkeybicycle. His non-fiction has appeared in the anthology How to Expect What You’re Not Expecting, and Outside In Literary & Travel Magazine. In 2012, his story ‘Here Be Dragons’ was nominated for a Pushcart Prize. He is also a four-time Juno Award winner, and one of New York’s most sought-after musicians. 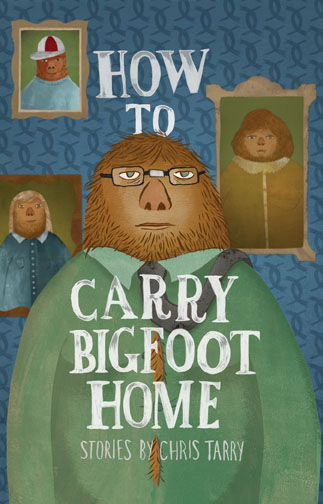 How to Carry Bigfoot Home

The thirteen stories in Chris Tarry’s richly imagined debut, How To Carry Bigfoot Home, lay bare the insurmountable forces that determine who we are and who we become. From an out-of-work dragon-slaying father in “Here Be Dragons” to a family arguing aboard a rocket ship in “Topics in Advanced Rocketry,” the stories use fantastic settings, blazing wit, and imaginative circumstances to explore very human truths. The stories work to reconcile the public self with the private heart to contemplate the monsters we carry home and lay bare for the ones we love the most.

Praise for How to Carry Bigfoot Home:

“Chris Tarry’s stories come at what we might call The Problem of Men as Boys from all possible angles, from a hapless medieval stay-at-home Dad who’s running a con game out of his one-room hovel to a Bigfoot who’s a sad failure as a creative writing teacher. These stories hilariously and poignantly evoke the way, when it comes to relationships, all men are living under a leaky thatched roof with winter on the way, always believing they’re on the edge of a turnaround, even though failure keeps returning like an old friend back in town.”—Jim Shepard, Story Prize-winning author of You Think That’s Bad and Project X

“The stories in How To Carry Bigfoot Home are fruitfully obsessed with maleness: How does one manage to be a father, a son, a brother, a husband? What are men supposed to do, and what mischief and violence might they have up their sleeves? In their gleeful linguistic play and surrealistic vibe, Tarry’s tales remind me of those of George Saunders, but he’s up to his very own wonderful thing in this vivid debut.”-Pamela Erens, author of The Virgins and The Understory

“Chris Tarry knows from monsters, and from disasters, and from love. He’s now decided to share it all with us. I think I speak for the world when I say: not a moment too soon.”—Roy Kesey, author of Any Deadly Thing and Pacazo

“What would happen if some mad scientist were able to fuse the otherworldly exuberance of H.P. Lovecraft with the nuanced pathos of John Cheever? The result would be a dazzling, explosive, and inexhaustible new kind of illumination: a writer named Chris Tarry.”—Stefan Merrill Block, author of The Story of Forgetting and The Storm at the Door

“Chris Tarry’s How To Carry Bigfoot Home will immediately invoke writers like Wells Tower, with its dragons and sea monsters and titular sasquatches colliding with the domestic strife that characterizes so many of the stories. This is an excellent debut, both funny and sad, heartfelt and often surprising.”—Matt Bell, author of In the House upon the Dirt between the Lake and the Woods