Born and raised in South Korea, Chungmi Kim came to America with a BA in English from Ewha University in Seoul. She earned an MA in theater arts from UCLA and has participated in the Warner Brothers Minority Writers Program for Television, WGA Open Door Writing Program, the Mark Taper Forum's Mentor Playwrights Program and USC Professional Writing Program. Chungmi-Selected Poems (Korean Pioneer Press 1982) was her first book. Her poetry has appeared in numerous anthologies, magazines, journals, on a spoken word CD, and in Los Angeles buses as part of the Poetry Society of America's Poetry in Motion LA '98-'99 Project. Awards she has received include the first place Open Door Writing Award for her screenplay The Dandelion from the Writers Guild Foundation, West and Grand Prize for her play, The Comfort Women, at the 1995 USC One-Act Play Festival. In 1999, her full-length play, Hanako, had a world premiere at East West Players in Los Angeles. For television, her credits include writing and producing The Koreans in L.A. and Poets in Profile for KCET-TV. As co-producer of Korea: The New Power in the Pacific, a one-hour documentary for KCBS-TV, she received an Emmy nomination. She currently resides in Falls Church, Virginia. 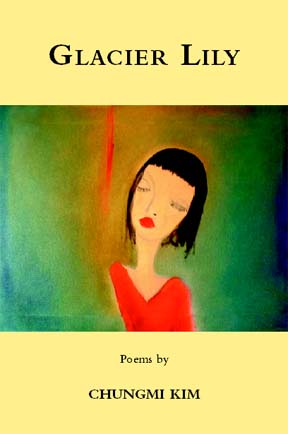 “Chungmi Kim explores the themes of longing and displacement in a culture she sees as both askew—like seeing “the mountain upside down”—and engaging, as in her title poem, “Glacier Lily,” where identity is born not of the purity of nostalgia but of the coloring of age, vibrant and transforming, as are all of the poems in this collection.”—James Ragan

“Chungmi Kim’s passion, empathy, and lyric voice bring us diverse communities: from Hollywood to South Central L.A.; from Korea to America. We see what she sees: “the mountain upside down,” but the very next moment we are lifted skyward by her words. Chungmi Kim’s poems find us again and again, but never in the same way.”—Russell C. Leong

The coming-of-age story of four boys in the High Country of western North Carolina after World War II, “The Falls of the Wyona” is a poignant, lyrical novella by Akron native David Brendan Hopes. Arden Summers is the narrator but not the main character. In the beginning there are three boys. Arden, his best friend […]

With the cancellation of the Virginia Festival of the Book, and recommendations to practice social distancing, there’s never been a better time to pick up some extra reading material. While we’re disappointed that we won’t get to hear from these authors in person, their work and words are still well worth your time. Whether you’re […]