Eckhard Gerdes is an American-born novelist & editor. He earned his MFA in creative writing from the School of the Art Institute of Chicago.

His work reflects experimental technique, sometimes ignoring time, space, or causality in the service of stories of individuals struggling to transcend fear and limitation. His recent work has been associated with the Bizarro Fiction movement, of which he is one of the leading proponents.

Reviews of his work have appeared in Rain Taxi, Notre Dame Review, Cream People, Review of Contemporary Fiction, and elsewhere.

Eckhard Gerdes is the editor of the Journal of Experimental Fiction, issues of which are usually Festschrifts on a single writer (e.g. John Barth, Raymond Federman, Harold Jaffe). He has also written on modern and post-modern literature for the Review of Contemporary Fiction, Hyde Park Review of Books, and other magazines.

Gerdes has twice been the recipient of the Richard Pike Bissell Creative Writing Award for excerpts from Przewalski’s Horse. The Million-Year Centipede was selected as one of the top ten mainstream novels of 2007 in the annual Preditors and Editors Readers Poll. He has also been a finalist for both the Starcherone and the Blatt fiction prizes for his unpublished manuscript White Bungalows. For Cistern Tawdry, Gerdes was nominated for the Georgia Author of the Year Award in the fiction category. He lives near Chicago. He has three children. 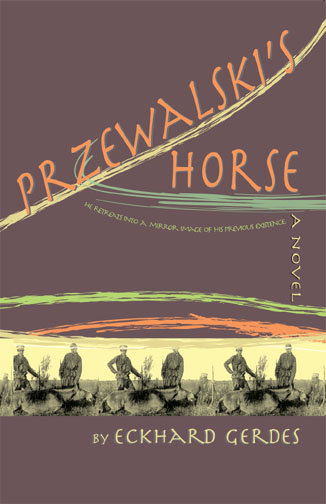 Przewalski’s Horse is a modern hejira following the misadventures of Keith Fine, a disgruntled former postal employee. When Keith discovers his wife’s infidelity, he leaves his job, his family and his home and hits the road. He hopes to find some remaining fragment of who he had once been. Cut off from everything familiar in his life, he sets off on a journey to reconnect with his earlier life as a young man in Chicago. He has been reading and has become upset by the columns of one Adrian in the Chicago Daily Mail, and decides to find the writer and give him a piece of his mind: a classic case of anger displacement, perhaps. On the way, he meets and gets entangled with a variety of odd characters who, like him, have taken to life on the fringe of society. Keith works toward building a new life with a new family, but eventually he realizes he is only mirroring his previous existence, and that he has been trying to escape, not life, but himself.