Florence Weinberger was born in Manhattan, raised in the Bronx, educated at Hunter College, California State University, Northridge, and UCLA, and has worked as a teacher, legal investigator, and consumer advocate, and a volunteer for the Shanti Foundation. She began to write poetry before she read poetry, and dabbled in other exotic forms of expression: a Halloween play in fourth grade; a novel in seventh grade, never finished; an essay on how to defuse an incendiary bomb. She published several short stories and produced two adult novels, unpublished, but it was in poetry where she found an art that challenged and satisfied. Nominated for a Pushcart Prize, her work has appeared in numerous literary magazines and anthologies. She is the author of two books of poetry, The Invisible Telling Its Shape (Fithian 1997) and Breathing Like a Jew (Crimson Edge 1997).

As a first generation American, Weinberger understood the immigrant experience, and still in her teens, befriended Holocaust survivors, close relatives among them, who made their way to America in the late forties and early fifties. She met Ted Weinberger, a survivor of forced labor and concentration camps, and they married in 1955. In love with his work, grateful for a second chance at life, for family and friends and good health, Ted was diagnosed with metastatic melanoma in 1998, as he and Weinberger were about to leave for a vacation in Italy. The two-year battle with cancer had begun.

Poets are doctors and insurance salespeople and caregivers, and always they walk a narrow road, seeking balance between the private life and its transmutation into truth and art. As wife and caregiver, Weinberger continued to write. With cancer so prevalent, the personal had become ordinary, fear and hope and grief everyday experiences. In her poetry, Weinberger gave voice to her strange/common new life with all the truth and depth she could muster. Carnal Fragrance moves across that vast landscape of disbelief, despair, mordant humor, hope, and resignation, and finally, acceptance. 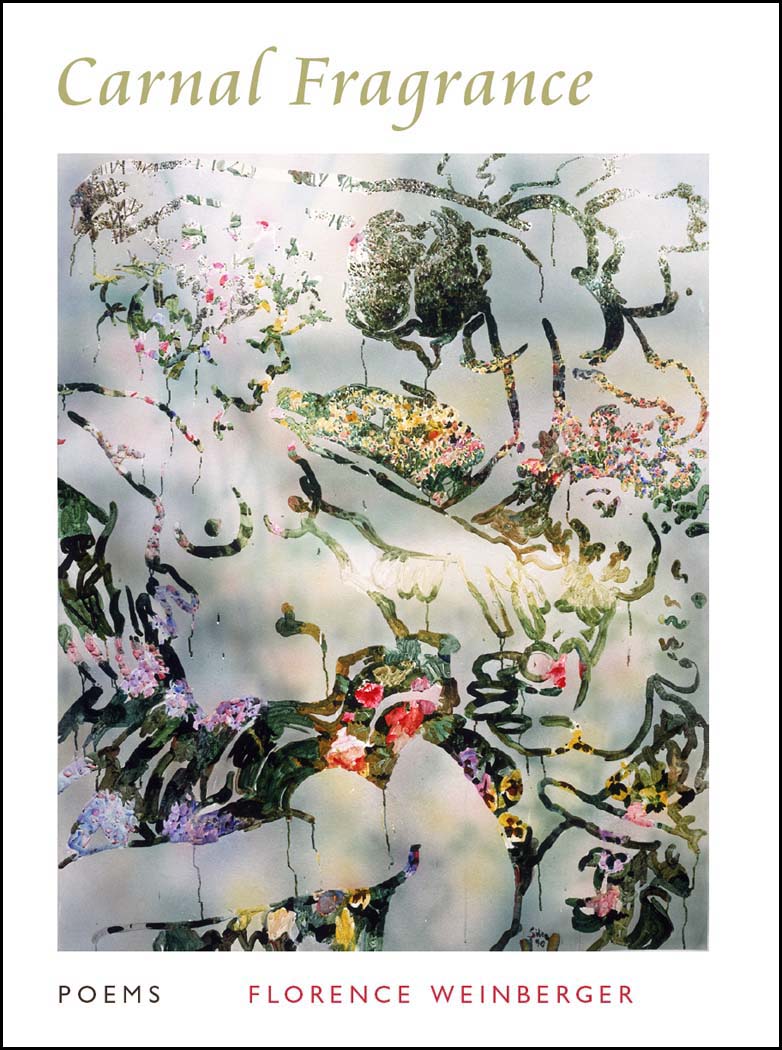 “The poems in Carnal Fragrance are straightforward dispatches from the land of grief and mourning. Observant, controlled, and rich with feelings, these poems take note of the surprising moments, small ironies, odd sensations and quotidian realities of survivorhood. They examine what happens when a loved one dies and you must live on without them, aching to find ways to continue in their absence, surrounded by their lingering presence and yet utterly bereft. Ovid said, “Songs have immunity from death.” Poems like these, which deal with loss in such a clear eyes way remind us that Ovid was right.”—Amy Gerstler

“As unfashionable as it may be in some quarters to talk about Voice and Subject in poetry, Florence Weinberger’s new collection, Carnal Fragrance, is remarkable for these essentials. While the surfaces of these poems are sharp, original and closely observed, it is the subject of mortality–the specific death of her husband, the death we all come to–that provides their weight and resonance. The historical and quotidian blend to offer an examination of life that bears brilliant witness to our desire and our loss. And the voice–authentic, compelling, and fresh.”—Christopher Buckley

LitHub Features Pete Hsu on the Otherppl Podcast Discussing IF I WERE THE OCEAN, I’D CARRY YOU HOME!

As an Asian American writer in literary fiction, there’s been a lot of really great stories told about the immigrant experience. That’s been one of our our go-to subjects. And I love those stories. Those were what made gave Asian American fiction a foothold, and it grew from there. It’s still a very rich subject […]

Alta recommends IF I WERE THE OCEAN, I’D CARRY YOU HOME by Pete Hsu

This debut collection follows a slew of children and young adults as they move through the quotidian patterns of life—celebrating birthdays, enjoying beach parties, attending church events—while also being thrust into grim, chaotic, and violent situations. Hsu’s stories expose the irresistible urge to search for hope within a depraved world.

Good Morning America features IF I WERE THE OCEAN, I’D CARRY YOU HOME by Pete Hsu

Good Morning America’s list of 15 October books to make you think and feel includes Pete Hsu’s new book out October 12, saying “Pete Hsu’s debut story collection chronicles scenes from a life adrift in this reflection on the many ways we’re expected to adapt to the world today.”

IF I WERE THE OCEAN, I’D CARRY YOU HOME by Pete Hsu Reviewed on Patch!

A refreshing book, I thought – a collection of short stories that this reviewer started from the beginning rather than picking and choosing which story to read next, based on the title. The titles are intriguing and the tone of several stories is not exactly threatening or scary but placed me back in my childhood […]

IF I WERE THE OCEAN, I’D CARRY YOU HOME Featured in Shelf Unbound

Full of warmth, terror, and underhanded humor, If I Were the Ocean, I’d Carry You Home, Pete Hsu’s debut story collection, captures the essences of surviving in a life set adrift. Children and young people navigate a world where the presence of violence and death rear themselves in everyday places: Vegas casinos, birthday parties, church […]