Frances Payne Adler is the author of five books: Making of a Matriot (Red Hen (2003), Raising The Tents (Calyx Books, 1993); When the Bough Breaks: Pregnancy and the Legacy of Addiction (NewSage Press, 1993); Struggle To Be Borne (San Diego State University Press, 1987): and Home Street Home (National Red Cross, 1984). Adler also co-edited Fire and Ink: An Anthology of Social Action Writing (University of Arizona Press, 2009). Adler’s current work is Dare I Call You Cousin, about the Israeli-Palestinian conflict, a collaboration with Israeli artists. Her poem, “Supreme,” from this collection, was a finalist for the Montreal International Poetry Prize.

Adler is Professor of Creative Writing and Social Action Emerita, and founder of the Creative Writing and Social Action Program at California State University Monterey Bay. She has won numerous awards including the Foreword Book of the Year Award for Anthologies, for Fire and Ink; the Obama Millennium Award; a California State Senate Award for Artistic and Social Collaboration; a National Endowment for the Arts Regional Award; and a Helene Wurlitzer Foundation Award. Adler’s Raising the Tents was a finalist for the Western States Book Award. 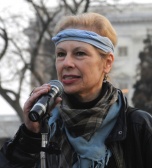 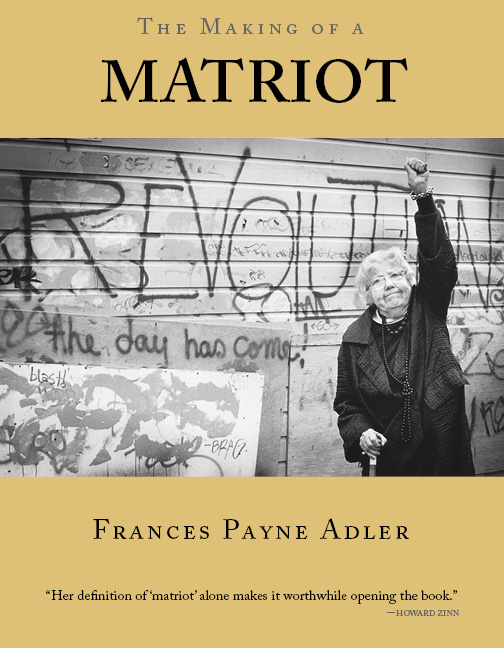 Making of a Matriot, Second Edition

“These poems touch and explore the core of human existence the wars, the illnesses, but also the love, the courage, the defiance, of which her own writing is an example. Her definition of “matriot” alone makes it worthwhile opening the book.”— Howard Zinn, author of People’s History of the United States

“If national defense is the issue, why not, as poet-activist Frances Payne Adler suggests, a ‘national defense’ budget that defends the people through affordable health, education, and shelter for everyone?”— Adrienne Rich, from Arts of the Possible: Essays and Conversations

“Fierce and protective, these are urgent poems for an urgent time. Adler infuses her lyrical and narrative landscape with unexpected definitions, statistics, quotes, and even a graph, to give us a glimpse of something larger.”— Diana Garcia, author of When Living Was a Labor Camp, winner of the American Book Award, 2001

Why a Second Edition?

“Why a second edition? “The Matriot is even more relevant now,” my publisher says. Actually, the collection was just as relevant when it was first published. But it wasn’t yet happening to him. And to many of us.

Let me tell you a story behind just one of the poems, “The Hearing.” Welfare reform was being rolled out in Wisconsin in 1995, and was about to roll across the country. Many of my Women’s Studies students were about to be cut from their classes. “These cuts have been going on in our communities for a very long time,” one of my African American students said to me after I read the poem at the hearing, “It’s just now reaching you folks.”

Since the November 2016 election, the callousness of the new government is affecting more and more of our communities, and the matriot word and concept are spreading…”