Gabriel Jesiolowski is an artist, writer and designer who works in a research-based practice that utilizes text, landscape, performance, installation and print elements. They were a 2016 MacDowell writing fellow and have shown their work at The Alice Gallery, Flux Factory and Dumbo Arts Center. They are interested in hybrid forms, embodiment and civic projects that entangle beauty and justice. Their work engages with ideas of accumulation and distribution, healing and trans* subjectivities. Their debut collection of poetry, As Burning Leaves, won the Benjamin Saltman Award. They are poetry editor at Territory. They live and work in the San Juan Islands and Los Angeles. 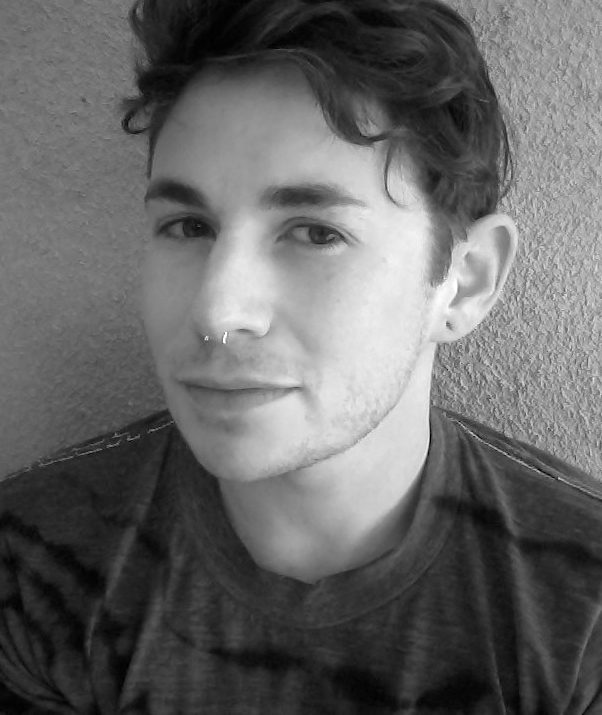 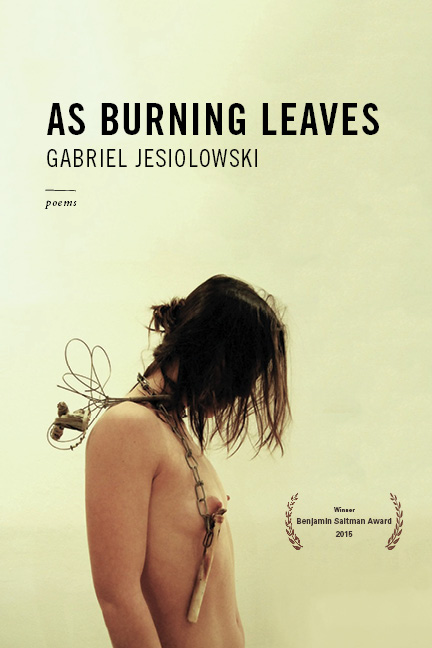 An arresting whisper of a debut, As Burning Leaves is a record of what remains. It moves through the visible world with precision and heart – delivers us to a space of aquatic light, to bruises flowering and moonlit streets covered in clothing. This collection emerges from channels of film, contemporary art, and meditations on the body: “less / if you dare winter / if you cut a star into your leg / if you find the green in the muck / less if the clouds disperse to allow blue inlets.” As Burning Leaves traces a path of queer failure that questions notions of desirability, self, and otherness. Jesiolowski asks what art is for, recalibrates the room of the stanza, proposes names for touch we never use. This book has an internal navigation system, a pact with the phenomenal. It courts the fleeting and rests in the stigma of a sunflower, lets us taste smoke in snow. “…the folk song says that we need a little sadness – so we invent the passing of railcars…” Elegant and cutting, radical and intimate, this is a book to find, to hold, to give.

“What Gabriel Jesiolowski is up to in their life – their installation art and their photography and their writing too – is built from a push and pull between a politics of accumulation that is full of abandoning and giving away. It makes sense then to think of As Burning Leaves as a sort of writing that takes a life and ties many parts of it together with a thin string to make a beautiful package. This is in many ways a book of love poems. But what it loves is all sorts of things, everything from bark to humans to folk songs to steam and smoke. It is a work that is quiet and a work that is attentive and one that is resonant with care and grace.”—Juliana Spahr, author of This Connection of Everyone With Lungs

“The geography of the body changes; its landmarks temporary; its border shifting, in Gabriel Jesiolowski’s As Burning Leaves, a cartography of new forms, new ways of being. These poems constitute a healing atlas, a journey of utmost compassion, marked by both formal elegance and artful eloquence. What a remarkable book; it will astonish and enchant you.”—D. A. Powell

“From wordless, our bodies. From nameless, our memories. An image, a yearning – every landscape, and certain people. The gesture, the wingspan, in quiet, and all across the page. Each scratch and smudge accrues the diary of As Burning Leaves, Gabriel Jesiolowski’s wonderful, haunting, elementally human presence!”—Ralph Angel

“‘[W]hat if there is no ghost realm?’ asks Gabriel Jesiolowski in the quietly arresting, steadily confident As Burning Leaves. But what if a ghost realm does in fact exist, and we are the ghosts – both haunting and haunted – who wander those ’causeways between/fucking & nothingness’ that lie in the wake of betrayal, violation, abandonment? These poems speak from and into that very realm, sifting memory’s restless evidence in a quest for answers to what ‘leads / / devotion / astray.’ Add to this a harder quest, for belief itself, the belief that ‘somehow, the body ceases grieving.’ These poems are at once the enactment and the proof of belief’s healing power. They stir; they shine.”—Carl Phillips