Geri Digiorno is the founder and director of the Petaluma Poetry Walk, an annual celebration of poets and poetry, now going into its 10th year.

Geri was born in the small community of Loga, Utah, the seventh of nine daughters born to Ethel and Ben Mifflin. The family moved to San Francisco in 1934, during the Depression. Growing up poor and experiencing adolescence in San Francisco of the 1940s was a tumultuous experience, one fraught with vivid characters and colorful dramas. It has been the source of much of Geri's poetry.

She documents it all with an honesty and love as only one who has successfully come to terms with life can do. Her poems speak to us of growing up female in America, of teenage pregnancy and a stay in a home for unwed mothers, of marrying the father of her child a year later and having a second and third child by the time she was 21, of the stifling isolation of the suburbs and an absent husband, of her divorce and later marriage to an irascible tavern owner and their adventures together, of his sudden death and her subsequent blossoming as a poet and painter. Geri's artist credo is simple: keep it honest. She has, and we are all the richer for it. 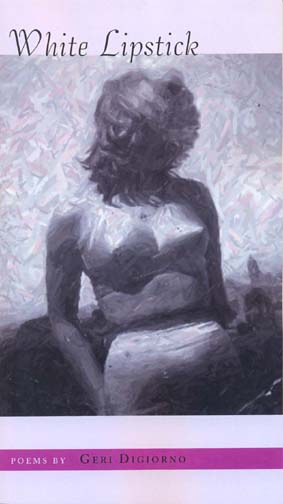 “The poems in Geri Digiorno’s White Lipstick explode with passion and power. Unforgettable and moving, these poems, rooted in pop culture, are ones you will return to again and again. In fearless poems about survival, Digiorno tells the story of an extraordinary woman’s life and tells it with humor and grace.”—Maria Mazziotti Gillan

“These direct and open-hearted poems speak with humor and insight of one woman’s life in the American West. Geri Digiorno’s clear voice draws us directly into the center of her world.”—Diane Di Prima