Jack Foley’s poetry books, all of which feature accompanying CDs or cassette tapes on which he performs with his wife Adelle, include Letters/Lights–Words for Adelle, Gershwin, Adrift (nominated for a BABRA award), Exiles, and (with Ivan Argelles) New Poetry from California: Dead/Requiem. His Greatest Hits 1974-2003 appeared from Pudding House Press. Two companion volumes of Foley’s essays and interviews, O Powerful Western Star and Foley’s Books: California Rebels, Beats, and Radicals, appeared from Pantograph Press. O Powerful Western Star received the Artists Embassy Literary/Cultural Award 1998-2000. Since 1988, Foley has hosted a show of interviews and poetry presentations on Berkeley radio station KPFA; “Foley’s Books,” a column of reviews, appears in online magazine The Alsop Review. Foley is also editor of The Fallen Western Star Wars (Scarlet Tanager Press 2001) and ALL: A James Broughton Reader (White Crane Press 2007). His monumental Visions & Affiliations, a collage history of poetry in California from 1940 to 2005, is forthcoming from Pantograph. His play, The Boy, the Girl, and The Piece of Chocolate was recently made into a film by Alabama filmmaker Wayne Sides. 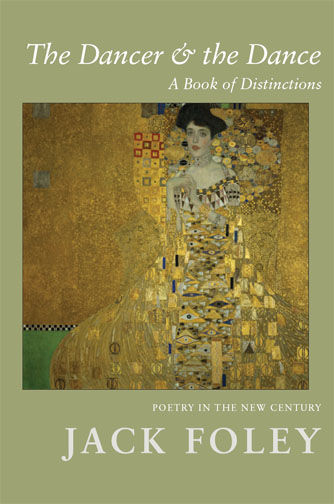 The Dancer and the Dance

Jack Foley’s The Dancer and the Dance: A Book of Distinctions deliberately challenges many conventional ways of thinking about poetry. Though extremely scholarly and aware of the “tradition,”Foley offers readings rooted in a consciousness which is simultaneously non academic and open to the new. “The self of this book,” he writes, “is not a unity but a multiplicity. Many people would agree with this idea of selfhood–the self as a ‘multiplicity of voices’–but clarification is still required as to how the concept of the self as multiplicity affects literary criticism, how it affects our actual reading of poems. It may be that the self we postulate as we read a poem contradicts the self we experience in the world; it is also possible that familiar poems may be experienced anew by being read in the light of multiplicity.” Foley’s explorations lead him into radically new readings of “canonic” work by poets such as Keats, Yeats and Mallarmé, into the world of opera, free jazz, New Formalism, and the writing of song lyrics, into “ethnic” literature, theater, and finally into problems of “spoken word” and “slam poetry.” Throughout, his point of view, initially controversial, becomes finally compelling. “It is possible,” he says quietly about the whole of Western culture, “that Plato was wrong, and that we must make an effort to think in a different way if we are to encounter reality at all.”