Janet Sternburg is a writer, poet, memoirist, playwright, filmmaker, and photographer, often called a Renaissance woman for the breadth and depth of her vision.

Her books include Optic Nerve: Photopoems (Red Hen 2005) in which she integrates her photographs within her poems so they function as visual stanzas. In the prologue to Optic Nerve, poet Molly Peacock writes, “Her photopoems redefine both poetry and photography.” In Phantom Limb: A Memoir (American Lives Series, University of Nebraska Press 2002), Sternburg writes a meditation in which she suggests that we all have phantom limbs–“someone no longer with us who remains a part of us.” Bill Moyers has described her book as “The perfect metaphor for . . . the ultimate inevitabilities of life.” Other books include The Writer on Her Work: Volumes One and Two (WW Norton and Co. 1981 and 2002, respectively), described as “groundbreaking. . . landmarks” by Poets & Writers magazine and selected for inclusion in 500 Great Books by Women. Volume one has remained continuously in print for twenty-eight years and was re-issued by W. W. Norton in a twentieth anniversary edition. She has just finished My Zombies: A Family Memoir, the second volume of the trilogy begun with Phantom Limb.

Her work in theater and film includes ten years as director of writers in performance at the Manhattan Theatre Club, where she pioneered new ways to present literature on stage, adapting and directing Stockard Channing in Colette; Zoe Caldwell in Isak Dinesen; and Marian Seldes both on stage as Louise Bogan and as Virginia Woolf in Sternburg’s award-winning film, Virginia Woolf: The Moment Whole. As former producer for NET, Sternburg’s films have been broadcast on national public television and the BBC; her documentary El Teatro Campesino was featured at the New York Film Festival at Lincoln Center. In 2008, her play The Fifth String was produced as a reading in Berlin and currently is being readied for a full production there.

She has also been active in cultural innovation, serving as senior program adviser in media to the Rockefeller Foundation where she co-chaired a symposium, Curators across Cultures at the Foundation’s Bellagio Study Center, and co-curated Remapping Cultures at the Whitney Museum. She has also served as the senior program officer for the New York Council for the Humanities. She has curated and written two thirteen-hour television series of independent films; one, Through Her Eyes, is the first television series of films by and about women.

Sternburg’s photography has been exhibited in one-person gallery shows in New York, Los Angeles, Mexico (Bellas Artes, San Miguel de Allende), Berlin, Heidelberg, Munich, and forthcoming as a public art installation at the Seoul Institute of the Arts in South Korea. Her work has appeared in portfolios in numerous prestigious publications, among them Aperture (six pages) and Art Journal (cover image and nine pages of her photographs), and has been widely acquired by private collectors and museums. In 2003, Sternburg’s photography was honored when she was chosen by the Utne Reader as one of forty creative people in all disciplines whose work is “innovative, with depth and resonance, full of ideas and insights that challenge us to live more fully.”

She is the recipient of numerous grants and fellowships, among them from the National Endowment for the Humanities, the Djerassi Resident Artists Program, and the MacDowell Colony. She has also served on the board of PEN USA, where she chaired its literary awards. She divides her time among Los Angeles, New York, and San Miguel de Allende (Mexico) where she takes many of her photographs. She is an active partner in the life of California Institute of the Arts, both as educator and colleague of her husband, Steven D. Lavine. She has published her work in such diverse journals and magazines as Common Knowledge and O at Home; traveled widely and written about such places as Iran, India and Morocco; and has spoken about her work at universities, museums, conferences, symposia, radio and television throughout the United States and the world. 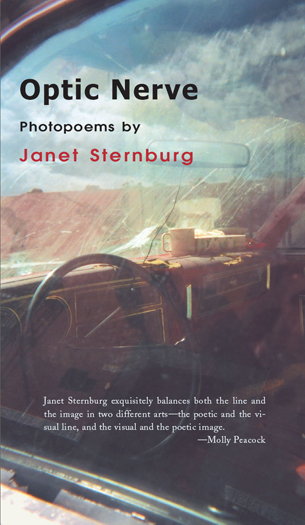 “These are brave and intimate poems etched with breathtaking constraint in a calibrated free-fall through the separate terrains of explicit meaning, metaphor and photography with impeccable timing.”— Trisha Brown

“Janet Sternburg’s are indeed lyrics of “optic nerve” as well as of poetic tact and verbal finesse. These carefully wrought poems are the perfect analogues to Sternburg’s superb photographs: they are spare and direct yet oddly mysterious, and their everyday language is charged with emotion, energy, and good humor. Whether practicing ekphrasis, as in “Natura Morta” or reanimating the love lyric and memory poem, Sternburg maintains an exquisite poise. This is, in the true sense of the term, a lovely book.”— Marjorie Perloff