Kathline Carr is a visual artist and writer living in North Adams, Massachusetts. She has exhibited her work in New York City, New England, and Canada, and her writing and art appear in various publications and online at www.kathlinecarr.com. 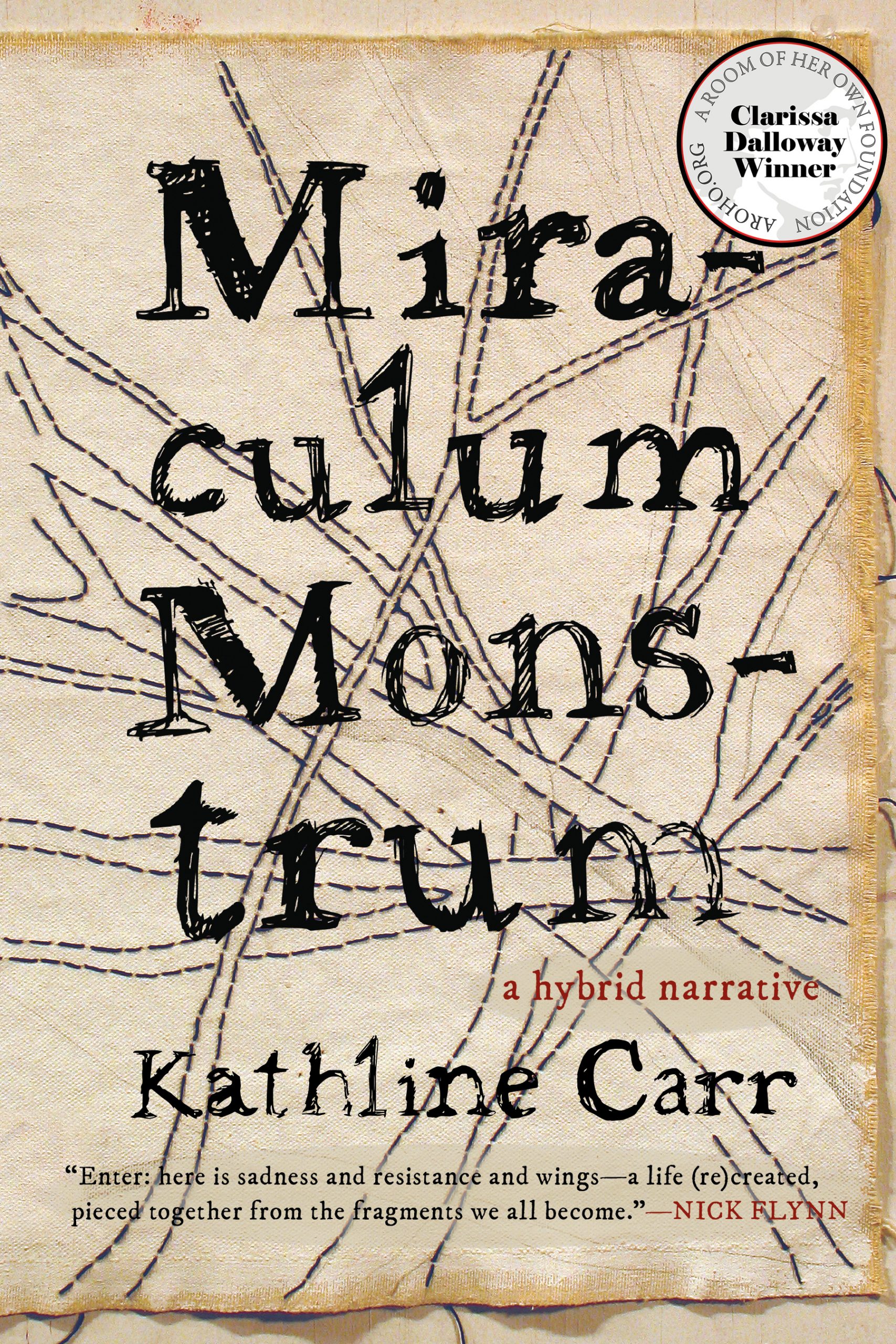 Miraculum Monstrum is a hybrid narrative about fictitious female artist Tristia Vogel, who experiences a radical physical transformation, beginning with the excrescence of apparent wings. Though her affliction is possibly an anomalous mutation resulting from worldwide ecological upheaval, the bird/woman is co-opted by a religious cult and written as the central figure of their scriptural text. Miraculum Monstrum contains fragmentary verse, scraps of lore, cult propaganda, curatorial commentary and images in a catalog for an exhibit of Vogel’s visual artifacts and writings that chronicle this speculative history.

“Enter in: here is that familiar moment when someone on the sidewalk, someone we maybe call schizophrenic, or deranged, yells out to her (our) demons, or to eternity, to just leave her the fuck alone, and for once you hear it, and for once you agree, and wonder what would happen if everyone yelled out what they really felt, and why don’t they, and what’s lost in the silence. Enter: here is sadness and resistance and wings—a life (re)created, pieced together from the fragments we all become.”—Nick Flynn, author of The Reenactments

“Miraculum Monstrum by Kathline Carr is a remarkably inventive, audacious debut collection that unfolds as poems, stories, fragments, drawings, paintings, mixed media pieces, and quotes to document and illustrate the life of Tristia Vogel, a visual artist who transforms dramatically and traumatically into a bird, and becomes an unintentional prophet. . . . This book is a unique and brilliant contribution to contemporary dystopic literature.”—Jan Conn, author of Tomorrow’s Bright White Light

“Kathline Carr’s Miraculum Monstrum joins ranks with Gabriel García Márquez’s story ‘A Very Old Man with Enormous Wings’ and Remedios Varo’s painting Creation of the Birds, among other significant works, in an artistic (oracular) tradition that invokes the artist-figure as bird, art-making as flight. The poetic voice and sheer inventiveness of this book as a response to our current environmental crisis is breathtaking. Its deft word-play tangles like filigree amid the heaviness of sickness. Miraculum Monstrum‘s architecture, in its interplay of word and image, post-apocalyptic Ovidian myth, documentary fiction, feminist magical realism, taxonomy, and sensuousness, is a tour de force of hybrid poetics.”—Shira Dentz, author of door of thin skins

“A visionary’s warning, a topographical map of the mind, a manual of survival in the face of apocalyptic odds. Kathline Carr’s imagined curatorial chronicle of Tristia Vogels metamorphosis is devastating—and transcendent.”—Jane Denitz Smith, playwright

“In Miraculum Monstrum, Kathline Carr chronicles the story of Tristia Vogel, an early twenty-first century painter who suffers a mutation that begins with a bony, feather-like protrusion from her scapula. Her condition defies diagnosis, and eventually brings her to full bird-body transformation, persecution and adoration, disaster and the joy of flight. Carr reaches far down and back into our deepest shared stories, of messianic hopes, apocalyptic-climactic disaster, and body-wracking metamorphosis, to move human imagination itself forward toward its own evolution and possible survival. Readers, like the pilgrims who flock to Tristia, will be leveled by a strange kindred impossible beauty in these pages which piece the story together with poems, pieces of Tristia’s art, and all manner of records and responses to the story of her life. Miraculum Monstrum is truly visionary, an act of the imagination of mythic scope.”—Diane Gilliam, author of Dreadful Wind & Rain