An Ohio native, Maggie Smith received her MFA from Ohio State University. Her first book of poems, Lamp of the Body, won the 2003 Benjamin Saltman Award and was published by Red Hen Press in 2005. She is also the author of two prizewinning chapbooks, Nesting Dolls (Pudding House 2005) and The List of Dangers (Kent State University Press 2010), a Wick Poetry Series selection. Her poems have appeared in The Paris Review, The Iowa Review, The Gettysburg Review, Gulf Coast, Florida Review, Poetry Northwest, Prairie Schooner, and many other journals and anthologies.

A recipient of a 2011 Creative Writing Fellowship from the National Endowment for the Arts, she has also received three Individual Excellence Awards from the Ohio Arts Council, two Academy of American Poets Prizes, and several Pushcart Prize nominations. She currently lives in Bexley, Ohio, with her husband and young daughter. 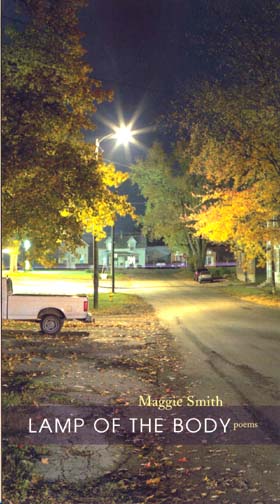 Lamp of the Body

“Here in Maggie Smith’s first book we encounter a voice that is spare, confident, and precise. Her images click into place, and the movement of each poem is deft, muscular, taut. These are poems we trust, poems that ask hard questions while at the same time convincing us of the magic in the world. Smith’s voice is reserved, yet she carries her world forward in her teeth, so to speak. There’s wisdom and acceptance in many of the poems, coupled with a willingness to utter what she does not understand, a recognition “that worse happens to better than I.” She embraces the mystery. There’s a kinship with the Ohio landscape, but also the recognition that “darkness ploughs its furrows here.” These are poems that do not flinch in the face of grief while at the same time they do not give into formulas that either comfort or accuse. I admire the courage and the control, the gorgeous turns, the leaps she takes in the poems while keeping the center of each poem intact. These are poems that do not wobble; the voice is confident and secure, the authority claimed, and the darkness met head on—”mealy, and bitter” but as she writes in “The Poem Speaks to Danger”: “I am the mouth/that can hold more . . . the globe//of some new, ready fruit.” This is a book that delights, intrigues, and instructs. A wonderful debut.”—Carol Potter