Born in Neenah, Wisconsin, Ryan G. Van Cleave grew up in the northwest suburbs of Chicago before attending Northern Illinois University, where he studied English and Philosophy. He received his M.A. in fiction and American Literature from Florida State University, as well as a Ph.D. in poetry and American Literature. He is the author of five poetry collections, including a co-authored book (with Cuban-American writer Virgil Suarez) entitled Landscape & Dream. Also with Virgil Suarez, he co-edited four poetry anthologies published by the University of Iowa Press, including Like Thunder: Poets Respond to Violence in America, which received the 2002 American Poetry Anthology Award. Ryan is also the editor of Contemporary American Poetry: Behind the Scenes (Allyn & Bacon/Longman, 2003) and co-editor (with Todd James Pierce) of Behind the Short Story: From First to Final Draft (Allyn & Bacon/Longman, 2006). His latest book is entitled The Magical Breasts of Britney Spears and is published with Red Hen Press. He teaches creative writing and literature at Clemson University; he also serves as Poetry Editor for The South Carolina Review. 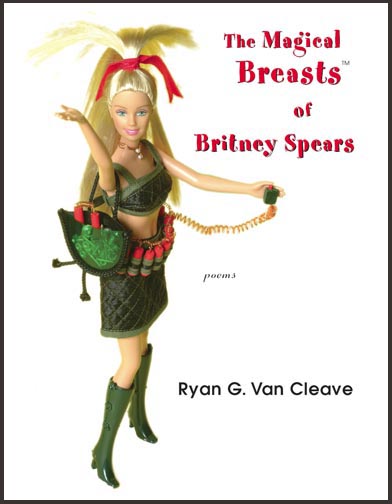 The Magical Breasts of Britney Spears

By writing so unabashedly about the glitter, the effluvia, the very Britney of contemporary American life, Ryan Van Cleave may have shortened the shelf-life of these poems, but few readers of today will be able to resist his supercharged language and unbound satirical exuberance.—Billy Collins, U.S. Poet Laureate 2001-2003

“Anger, hunger, and desire power Ryan Van Cleave’s excitable new poems, but their rudeboy force is always harnessed by a larger comic vision. Whether he’s channeling King Kong, Bubbles the Chimp, or Counter-Terrorist Barbie, Van Cleave alternately throttles and embraces our less-than-perfect world, turning its wild inconsistencies to his own ends. Never cool, never shying away from the facts on the ground, these poems, like Michael Jackson’s tortured Bubbles, adamantly refuse to be denied.”—Rachel Loden, author of Hotel Imperium

“Ryan Van Cleave’s explosive riffs roll over the American pop culture landscape like a caffeined-up emcee from the dark side. Trying to keep up with his quick wit and dizzying leaps may leave you out of breath, but gasping with surprise and wonder, marveling at how—beneath the glitz—Van Cleave has found the sick, twisted soul of this country.”—Jim Daniels, author of Show and Tell

“In The Magical Breasts of Britney Spears, Van Cleave makes unforgettable music. Tuned to the frequency of the moment, this book brilliantly articulates the paradoxes of the postmodern American landscape. Anxieties, elations, grievings—this book has it all.”—Virgil Suárez, author of 90 Miles: Selected and New Poems