Stew Albert was born in New York City in December, 1939, and grew up in Brooklyn. He received a Bachelor of Arts degree from Pace University, worked for the New York Department of Welfare, started graduate work at the New School for Social Research then dropped out and hit the road.

Stew spent time in Cuba protesting the Vietnam War and became an organizer for the Vietnam Day Committee in Berkeley in 1965. Stew also began writing regularly for the Berkeley Barb, a radical underground newspaper, and was arrested for protest activities on several occasions.

In 1969, Stew became the editor of another radical underground newspaper, the Berkeley Tribe, and put out the first call for students and Berkeley residents to take unused land from the University of California and turn it into a “People’s Park.” In 1969, Stew was an unindicted co-conspirator in the famous 1969 Chicago Conspiracy Trial.

In 1975, Stew’s longtime sweetheart, Judy Gumbo, found an FBI homing device on their car. Stew and Judy took the FBI to court and discovered that the FBI had burglarized their rural mountain cabin and installed listening devices on numerous occasions. In 1977, Stew and Judy married and one month later, Stew became a father.

Stew is the author of two books, The Sixties Papers: Documents of a Rebellios Decade, (Greenwood Press, 1984) and his memoir, Who the Hell is Stew Albert (Red Hen Press, 2003). Stew died in 2006. Two days before his death he posted on his blog, My politics haven’t changed. 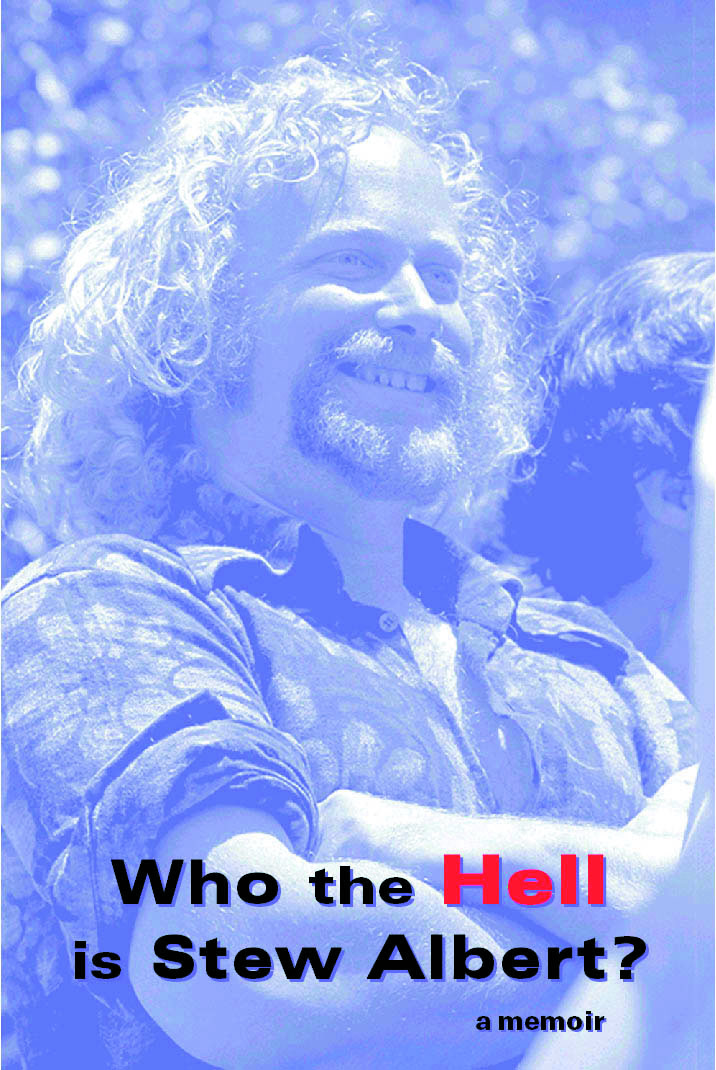 Who The Hell Is Stew Albert?

Stew Albert is an almost-nice Jewish boy who grew up in Brooklyn between World War II and the Cold War. Many of us remember hiding under desks during practice nuclear attacks, but Stew remembers the brass pail in his vestibule filled with white sand in case the Japanese bombed his house and there was a fire. Yes, Stew grew up very bored in Brooklyn—and got out in a hurry. His was the unspectacular childhood of a not-especially-promising kid. He wasn’t good at punch ball, spelling, math, geography, or kick-the-can; although he did have some surprising skill swinging a stick at a spaldeen. He wasn’t particularly popular nor was he disliked; he was invisibly normal. He did, however, have one very distinguishing characteristic: he was, and still is, a very blond Jew. Stew frequently daydreamed about outlaws and tough guys, as did his father, who worked as a city clerk for fifty years. By all rights, Stew should have followed in his old man’s footsteps. But instead, we find a young man stoned and hanging-out, in bed with John Lennon and Yoko Ono, shvitzing in the Luxor Turkish Baths with Abbie Hoffman and Jerry Rubin, drunk in Santiago, Chile with Phil Ochs and blasted with Allan Ginsberg on a manic drive through San Francisco’s hills. An alert CIA agent would have easily recognized our former loser on an Algerian beach acid-tripping with Timothy Leary. Can this childhood mediocrity—outstanding only for his hair color—be the same guy showing off his Chicago riot head wounds to William S. Burroughs? Can it be him amidst the chaotic siege on the Pentagon in 1967, giving a speech to the 82nd Airborne about the Lone Ranger? How did this putz kid reinvent himself? Instead of taking a civil service test, he started taking his daydreams seriously. But why? It must have been the sixties—that brief period of time when everything seemed possible and the future was up for grabs . . .