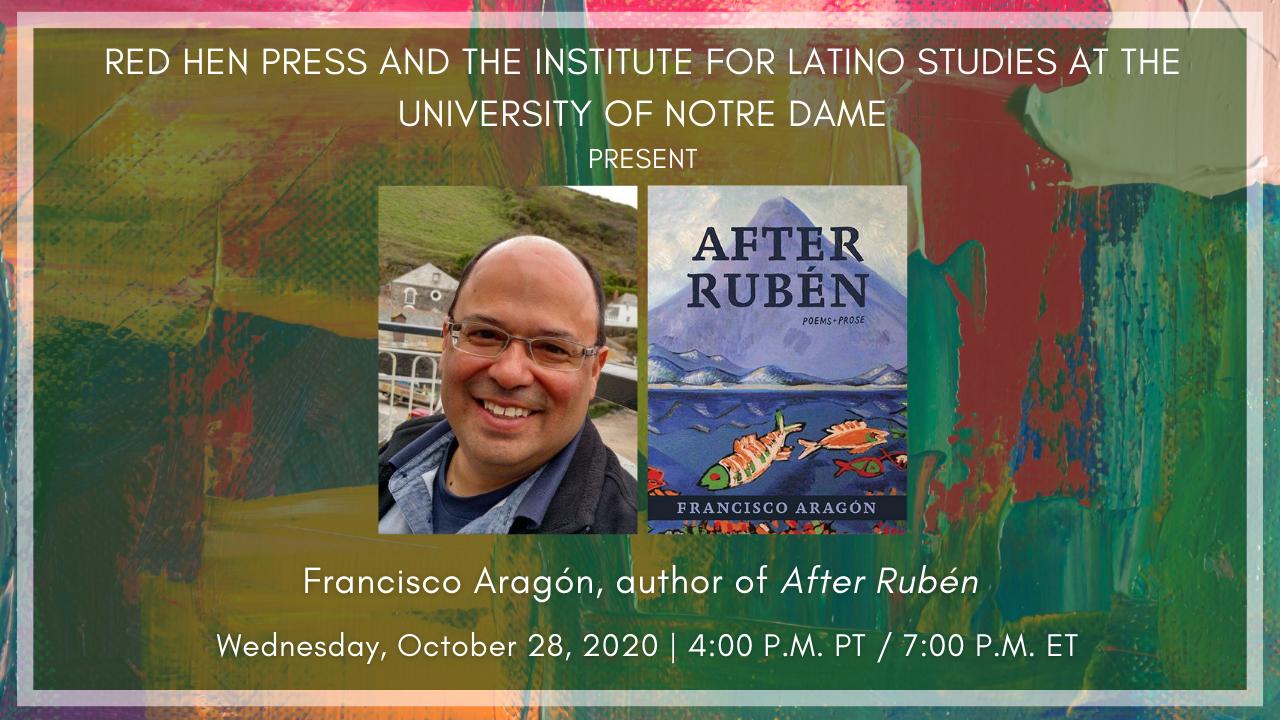 Red Hen Press and the Institute for Latino Studies at the University of Notre Dame present a reading and conversation with Francisco Aragón, author of After Rubén!

Francisco Aragón is the son of Nicaraguan immigrants. He is the author of three books: After Rubén (Red Hen Press, 2020), Glow of Our Sweat (Scapegoat Press, 2010), and Puerta de Sol (Bilingual Press, 2005).  He’s also the editor of, The Wind Shifts: New Latino Poetry (University of Arizona Press, 2007). His work has appeared in twenty-two anthologies, as well as various literary journals, both print and online. A native of San Francisco, CA, he is on the faculty of the University of Notre Dame’s Institute for Latino Studies (ILS), where he teaches courses in Latinx poetry and creative writing. He also directs the ILS’ literary initiative, Letras Latinas. He has read his work widely, including at universities, bookstores, art galleries, the Dodge Poetry Festival and the Split This Rock Poetry Festival. A CantoMundo fellow, he is also a member of the Macondo Writers’ Workshop. For more information, visit: http://franciscoaragon.net

Brenda Cárdenas’ books and chapbooks include Boomerang (Bilingual Press); Bread of the Earth/The Last Colors with Roberto Harrison; Achiote Seeds/Semillas de Achiote with Cristina García, Emmy Pérez, and Gabriela Erandi Rico; and From the Tongues of Brick and Stone (Momotombo Press). She also co-edited Resist Much/Obey Little: Inaugural Poems to the Resistance (Spuyten Duyvil Press) and Between the Heart and the Land: Latina Poets in the Midwest (MARCH/Abrazo Press). Cárdenas’ work has appeared or is forthcoming in Latino Poetics: The Art of Poetry, Grabbed: Take Back the Narrative, Hope Is the Thing: Wisconsinites On Hope and Resilience, Court Green, Ghost Fishing: An Eco Justice Anthology, POETRY, The Golden Shovel Anthology, The Wind Shifts: New Latino Poetry, and many others. She has served as Milwaukee’s Poet Laureate, co-taught the inaugural workshop for Letras Latina’s Pintura:Palabra: A Project in Ekphrasis, and currently teaches at the University of Wisconsin-Milwaukee.

Michael Nava is the author of an acclaimed series of eight novels featuring gay, Latino criminal defense lawyer Henry Rios who The New Yorker, called “a detective unlike any previous protagonist in American noir.” The New York Times Book Review has called Nava “one of our best” writers. In 2020, his latest Rios novel, Carved in Bone was awarded his seventh Lambda Literary Award in the gay mystery category. He has also been honored with the Bill Whitehead Award for Lifetime Achievement in LGBT Literature. His award-winning historical novel, The City of Palaces, set at the beginning of the 1910 Mexican revolution, is set to be republished in September 2020 by Amble Press. Follow him on Twitter: @micnavawriter, Facebook: https://www.facebook.com/MichaelNavaWriter/, website: http://michaelnavawriter.com/

Urayoán Noel is a Puerto Rican poet, performer, translator, and critic living in the Bronx, New York. He is the author of eight books of poetry, including Buzzing Hemisphere/Rumor Hemisférico (2015) and the forthcoming Transversal, both with the University of Arizona Press. His other works include the prize-winning study In Visible Movement: Nuyorican Poetry from the Sixties to Slam (University of Iowa Press, 2014) and a bilingual edition of Pablo de Rokha’s poetry, Architecture of Dispersed Life, which was a finalist for the National Translation Award. He has recently performed at the Poesiefestival Berlin, the Toronto Biennial of Art, and the Woodberry Poetry Library, and on his Wokitokiteki vlog. Noel teaches at New York University and at Stetson University’s MFA of the Americas. and he is currently a Schomburg Center scholar-in-residence.

Misael Osorio-Conde is a poet and a second-year MFA candidate at the University of Notre Dame. He was born and grew up in Puebla, Mexico and migrated to Southern California when he was 17 in search of economic and academic opportunities. In 2019, along with Francisco Aragon and many of his peers, he participated in the national “One Poem Festival for Migrant Justice,” and conducted an interview with the poet Juan Morales. His work is forthcoming in the literary journal deLuge and the online literary journal Storyscape.