“The poems in Elise Paschen’s Bestiary explore domestic preoccupations set against the backdrop of the wild-heartedness, real and imagined, of the animal world,” praises the poet Jason Shinder. In this modern-day Bestiary, or “Book of Beasts,” the line between animal and human is thinly-drawn. The daughter of a Celtic king, through love, is transformed from beast to human; lovers take flight as moon and owl; manatees transform, before the explorers’ eyes, into mermaids. This dynamic runs throughout the collection: taking flight, hovering between air and earth, plunging, and then resurfacing from water. The poems create a constant engagement between what tethers us to our daily lives—marriage, motherhood, raising a family, the loss of parents in old age—and the desire for other worlds. Exploring notions of transformation, these poems cross thresholds between animal and human, between death and life.

Award-winning poet, Elise Paschen, creates in her third and most complex poetry collection, work which is elegant and passionate, preternaturally still and reckless all at once. Paschen displays a variety of form and nuance from ghazals to long-lined free verse poems. Writing out of a distinct Western literary tradition, but tapping into her Native American (Osage) roots, Paschen celebrates the mythic, the unusual, the magical glimpsed in the everyday. 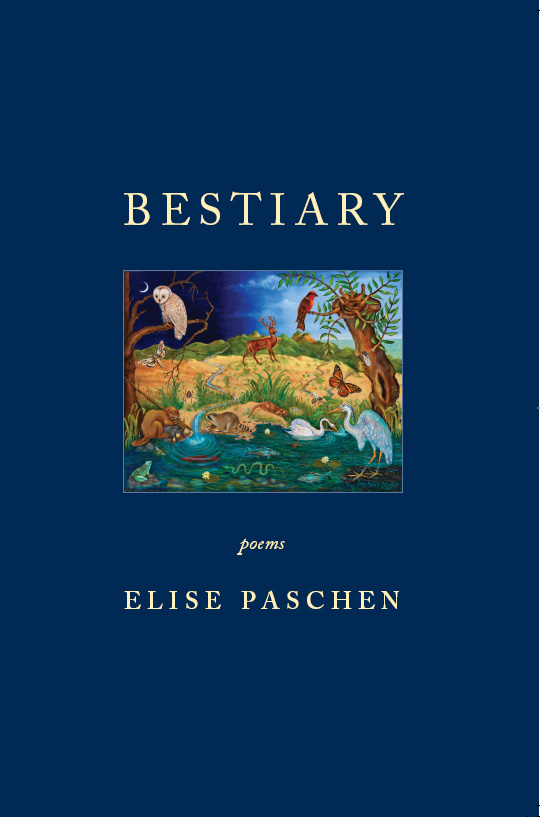 Process and Community: An Interview with Elise Paschen in Fifth Wednesday Journal

The passionate, yet controlled, third volume from Paschen (Infidelities) pursues the likenesses between human beings and other sorts of beasts: Paschen watches domestic animals, visits zoos and backyards, and records […]

“The Chicago poet has spread the good wordings via book, CD, and subway.”