In Bone Light, Orlando White’s debut volume, he explores the English language from a Diné (Navajo) perspective. He invites us to imagine that we, as a people all people in this imaginary country called the United States–are speaking an Indigenous language and that the English language exists merely as a remnant of the colonial past.

Despite its tenuous existence in this re-imagined present, English remains a danger to Indigenous thought, as it threatens to impose an alien worldview through its vocabulary and syntactical maneuvers. Historically, English was used by non-Natives to document Indigenous cultures; against this historical backdrop, White also writes to document, but he works to create something more beautiful than harmful. He does not attempt a critique of the English language; he works with it and against it to gain a better understanding of its peculiarities and limits, creating a relationship through these sometimes humorous, sometimes irreverent acts of exploration.

Throughout Bone Light, Orlando White approaches the English language as if he has just encountered it, as if it were a mysterious set of symbols. Focusing on the particles of the language, the punctuation marks, the letters, the spaces between word, he turns them a while in his hand like strange inexplicable artifacts from a lost world, then sets to work, refashioning them into something he can use. 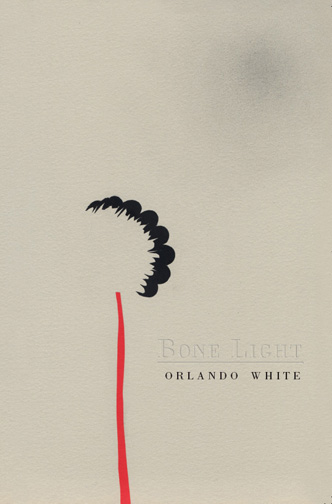 Language can be an intriguing subject, and author Orlando White explores the language we speak every day, English. "Bone Light" is his discussion through verse of the subject, exploring the nuances and treating English as if it were a foreign language in concept.

The work of the poet is one of reassessment: it's a continual look at the intricacies and minutiae of a world outfitted with a voluminous gadgetry of words. Poems, at best, are samplings of larger pieces of a broad experience. They reveal the urge to speak with an authoritative voice through the systems of language. […]

"Everything I write requires this: Alphabet." A child sees letters first, "shape distinguishing itself from its background," but soon we lose the innocence of that first encounter to ideas of sound, sequence, and sense, some fixed order separating right from wrong. In this debut, White, a Dine' (Navajo), never gives up the innocence of the […]