Chopper! Chopper! reflects the lives of Mexican Americans, immigrants, and la jotería–malfloras, jotos, and other rainbow communities–across many generations. As vividly as Mexican Technicolor, these poems capture life in the barrio: vendors hauling carts with elote, raspados, botes y más. Vatos fighting to exist. Summer evenings, children playing in the calles of East L.A., El Paso, Toronto, of bordered tierras everywhere. Reyes’s work exudes the pride, strength, turmoil and struggle of neighborhoods brimming with tradition and invention. These homegrown verses reveal the barrio in all its intricate layers. Reveling in difference, they fight to make room for something new: marimacha poetry

“In this book there is no time to run home chillando or licking your wounds–the gente in Reyes’s recollections pull you into a world where crooked tortillas and marimacha swagger are less the image of otherness, but a symbol of nosotros’ness. Through Reyes’s barrio lyricism, we, the others, do not cross over to become the norm, but come together as strands of hair, distinct, yet slicked together by the force of love, coraje, and Tres Flores.”—Lorenzo Herrera y Lozano

“Chopper! Chopper! replenishes the landscapes of East L.A. and the lives that give it shape. Reyes resurrects old-time shops and hangouts. They memorialize the land alongside edifices of refuse, sterile towers, man-made deserts and rivers, machines that suffocate the sky, fields locked in the historical cycle churning out the fieldworker’s woe. Queers, dandies, cholos, mariachis the same as ‘Chumash, Pomo, Modoc’ ramble these streets. In these dramatic monologues, the perfect poetic mode to retool history, Reyes’s wit leaves a mark. Her young self marvels at ‘old coors or budweiser botes, tab, aspen soda cans…tossed by the lake at Lincoln Park, half buried in the sandbox just like the statue of liberty in planet of the apes.’ In this cool, sad, funny collection, East L.A. startles us like ‘a pinche far, faraway land’ it really is.”—Kristin Naca, author of Bird Eating Bird 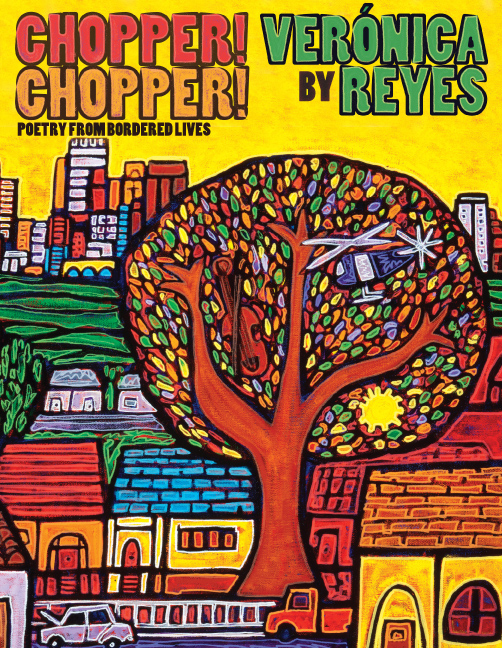 Chopper! Chopper! listed as a 2014 Book of the Year by Latina Book Club

Veronica Reyes sat down with El Paseo Times and gave some insight into her artisitc process and her new book of poetry. "'Poetry just comes out of you, those moments […]

Veronica Reyes's CHOPPER! CHOPPER! from Arktoi Books and her other stunning work were recently featured in a fantastic blog about East L.A. and Chicana Literature. Check out the full post

The Carnegie Library of Pittsburgh praises Verónica Reyes for her collection of poetry. "Verónica Reyes charges her lines—nearly every single one—with the sharp electricity of her East L.A. tongue. It’s […]

Verónica Reyes' latest collection, Chopper! Chopper! gets praised by Paloma Martinez-Cruz of Mujeres Talk for its rich depictions of culture and atmosphere. "Reyes is at her best when she navigates […]

Verónica Reyes’ Chopper! Chopper! is proclaimed to be full of swagger” by Elaine Sexton”

Chopper! Chopper! is Dramatic and Bold””

In a review of Veronica Reyes' Chopper! Chopper!, the poetry collection gets lauded as an "intimate portrait of her East L.A. neighborhood, family and local haunts with daring rhythm and […]

Verionica Reyes's Chopper! Chopper! Poetry from Bordered Lives was called a "genunie treasure" by Vince Gotera in the North American Review. Read the full article in the most recent issue […]

Verónica Reyes’s Chopper! Chopper! Named One of the Best LGBT Books of 2013