A lyrical journey through family legacies, silenced histories, and the possibilities of transformation, guided by the ruthless, witty, and vulnerable voice of a mythic woman warrior.

Guided by the character of the Woman Warrior–witty, swift, and ruthless in her wonder—readers of Brynn Saito’s second collection of poetry travel the terrain of personal and historical memory: narrative poems about family, farming towns, and the bravery of girlhood are interspersed with lyric poetry written from the voice of a stone found in a Japanese American internment camp during the wartime incarceration. What histories can be summoned with poetry? What are the forces shaping an American life in the 21st century? Car accidents, patriarchy, and television fall under this poet’s gaze, along with the intergenerational reverberations of historical trauma. As with The Palace of Contemplating Departure, Saito’s first award-winning collection, Power Made Us Swoon strives for wonder and speaks–in edgy and vulnerable tones—of the fraught journey toward a more just world. “Learn to lie to survive,” sings the woman warrior, “Learn to outlast the flame / learn the art of surprise.”

“Seeing from positions on a 360-degree angle, Brynn’s surprise shifts in perspective can come sudden, from behind herself, describing the curve of her own spine, or from the eyes and sensibilities of stones witnessing construction of an internment camp, or from within an imaginary thought, a what if, a conversation with sky or ghosts, a bloody memory. Hers is a view from outside witnessing human experience—of nature itself watching. These time-and space-expanding images, requiring the skill of well-wrought poetry—poetry with a poetic—stay with the reader, and merge with a greater emotional, philosophical, and spiritual meaning. Electric kaleidoscopic imagery, yet the center holds its intention/s. Wouldn’t it be amazing to write like this.”—Judy Grahn

“Between worlds do it sometimes seem move the forces of an inconnotable world and so Brynn Saito’s poems engage them on a level of narrative and lyric that be sometimes sorcerous, sometimes medicinal. The questions this book asks of its mythological and actual heroes are questions I want to know the answers to. Her own are brave—sure, you can expect that much—but they are also beautiful. As the poet reassures herself, “Your spirit is a songstress / occupying the sea.”—Kazim Ali 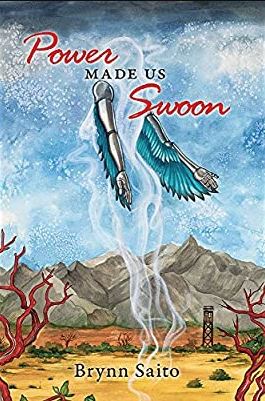 April is National Poetry Month. Writers from around our newsroom share the poems they’re turning to as the nation defrosts… One day above me / men with bony shoulders came […]