William Trowbridge’s Put This On, Please: New and Selected Poems contains work from all five of his full collections, as well as a group of new poems. In lines that capture the rhythms of everyday speech (with the ghost of meter haunting closely along), Trowbridge follows misfits and outcasts whose ramblings and shamblings reflect our own well-meaning gropes for fulfillment. These reader-friendly poems draw often from classic films and other elements of popular culture—from Buster Keaton to Chuck Berry, from King Kong to Wile E. Coyote. Trowbridge is not squeamish about exploring the darker side of humanity, as seen in poems about the Kiss of Death delivered by Michael Corleone in The Godfather II or about Nebraska mass murderer Charles Starkweather. Capping off the book, a group of new poems takes a fresh look at old themes, sounding deepened notes of both melancholy and celebration. Throughout this seriocomic account of human foibles, vices, and wonders, Trowbridge makes a strong case for laughter as the only appropriate response to our post-post-modern condition.

Praise for Put This On, Please

“Plunging head first into the colorful waters of popular culture, William Trowbridge manages to find there are ways to reiterate some of the basic stuff of lyric poetry. His gathered poems combine pointed social criticism with just plain verbal fun.”—Billy Collins

“To call William Trowbridge a plain-spoken poet is accurate and one of his great virtues: he is unafraid of being understood. He is also a master of metaphor and, one never doubts the honesty of his poems, his voice. His poems speak, oh they speak! What he does is very hard to do and he does it brilliantly.”—Thomas Lux

“William Trowbridge’s has been a life lived in poetry. It seems to emanate from him like a pine scent from the forest. And how wonderful to have these poems all together, to experience the range of subjects—from the Frog Prince to old movies to boogie-boarding in the California surf. The breadth of tone and style is equally impressive, as the wry meets the elegiac or the subtleties of rhyme and meter salute the adventurous vers libre. Here’s a book to relish and return to.”—Nance Van Winckel 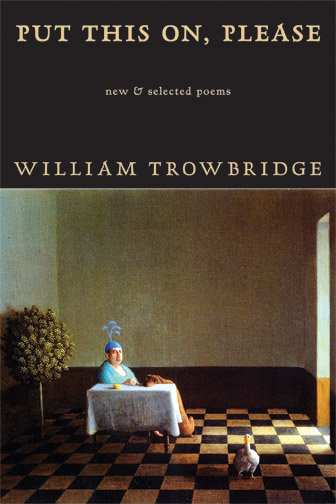 Tar River Poetry gave a wonderful review of William Trowbridge’s Put This On, Please for their spring issue. He is praised for his skill of making poetry seem effortless and enjoyable for his […]

New Letters’ thoughts on William Trowbridge’s Put This On, Please