Amy Lemmon’s stunning and heart-wrenching debut, Saint Nobody, offers us a profound meditation on the body, on the tribulations and the hard-found joys of incarnation. Lemmon does not shy away from a world where “vestigial angel-parts ache to emerge” and where there doesn’t appear to be a “speck of God.” This piercing meditation takes the problem of the body, and the problem of the body in a world that often seems God-less, head-on, without flinching, and yet delivers us truths and beauty we would never have imagined. Lemmon knows that we can’t count on the intercession of an absent saint, and she refuses easy solace. Instead, she probes deeply into the pain, into the conflicting emotions of childbirth, into the birth of a child with Down Syndrome—which is probably the most extraordinary poem written on that subject—to understand the life of our body here, the body in which “pain is sharpest where my wings would be.” This is a world of urine samples, “errant” chromosomes, lost kisses, first bleedings, chaotic cells, and scars, where the blood seems ours alone, and where the words are the only bread we have that may deliver us. In the bread of her words, Lemmon has given us a profound sacrament. 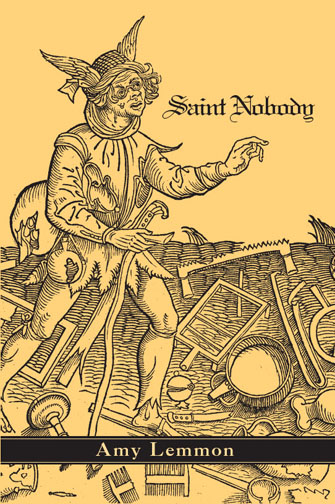 Amy Lennon's collection of poetry, "Saint Nobody", received an in-depth review from the craft-focused community of Centrum in Port Townsend, Washington!"Poet Amy Lemmon, whose just-released collection Saint Nobody is now […]