A baby taken from her mother at birth, an Episcopal priest with a daughter whose face he cannot bear to see, a mother weary of searching for her lost child: Tea by the Sea is their story—that of a family uniting and unraveling. To find the daughter taken from her, Plum Valentine must find the child’s father who walked out of a hospital with the day-old baby girl without explanation. Seventeen years later, weary of her unfruitful search, Plum sees an article in a community newspaper with a photo of the man for whom she has spent half her life searching. He has become an Episcopal priest. Her plan: confront him and walk away with the daughter he took from her. From Brooklyn to the island of Jamaica, Tea by the Sea traces Plum’s circuitous route to finding her daughter and how Plum’s and the priest’s love came apart.

“Tea By the Sea is a powder keg of a novel, where secrets and lies explode into truth and consequences, all told with spellbinding, shattering power. Hemans doesn’t just fulfill the promise of her debut— she soars past it.”—Marlon James, Man Booker Prize Winning author of Black Leopard, Red Wolf

“The forbidden love story of Plum and Lenworth comes alive in this heart-rending novel, Tea by the Sea. Hemans has a stunning ability to give words to that elusive feeling of emptiness, and the longing for redemption is palpable. In Hemans’s deft hands, regrets are explored with precision and compassion so that the reader finds herself unable to turn against even characters who have committed the most wretched betrayals. Tea by the Sea is like the story told in a grandmother’s kitchen with the odors of fried dumplings and saltfish wafting into mouths that are set agape at the heady twists and turns delivered in an urgent and beautiful prose.” —Lauren Francis-Sharma, author of ’Til the Well Runs Dry

“Tea by the Sea is an insightful and illuminating prism of a novel, deftly examining familial identity and personal transformation. Hemans turns the kaleidoscope, catching light at different angles, to show us how one person’s act of honor and responsibility can also be an act of unspeakable betrayal.” —Carolyn Parkhurst, author of The Dogs of Babel and Harmony 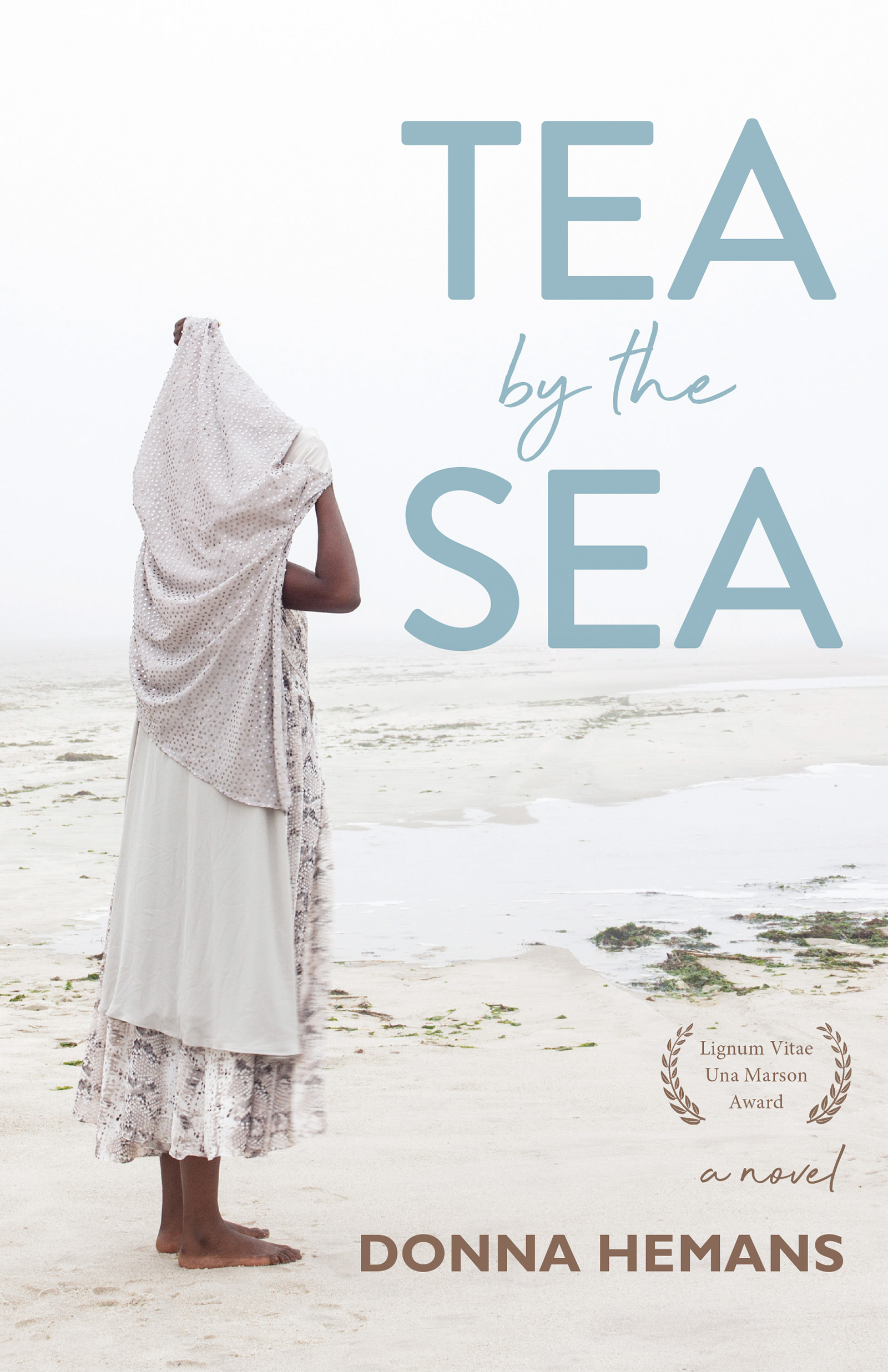 TEA BY THE SEA listed on Electric Lit!

My mom says every mother needs a daughter. It’s not that she doesn’t love and appreciate her two sons. My middle brother knows best how to comfort her in times […]

TEA BY THE SEA (Donna Hemans) and HER SISTER’S TATTOO (Ellen Meeropol) shortlisted for the Story Circle’s Women’s Book Awards!

The Sarton Awards are presented in four categories (memoir, historical fiction, contemporary fiction, nonfiction). The award program is named in honor of May Sarton, who is remembered for her outstanding contributions […]

Tea by the Sea featured in OPRAH Magazine!

O, the Oprah Magazine, features the Rebel Women’s Lit Caribbean Reader Awards, including Donna Hemans’s Tea by the Sea, which won the award for Best Fiction!

TEA BY THE SEA wins Best Novel for the Caribbean Readers’ Award at Rebel Women Lit!

TEA BY THE SEA featured in Fordham Magazine!

In her long-awaited second novel, Donna Hemans, the author of River Woman (2002), weaves a compelling tale of longing—to belong, to find family and a sense of home, to be fulfilled, and […]

The operator-assisted collect call comes on a July morning in 1987. It’s still early, before 9 a.m., and except for the telephone ringing, the house is quiet, my younger sister […]

Photographer Matt Witt has a large list of media you may have missed. Donna Hemans’ Tea by the Sea and Tracy Daughtery’s High Skies have been featured in the list. […]

Q&A with Donna Hemans about her novel TEA BY THE SEA in the New York Writers Institute!

You recently published your second novel. Congratulations! Thank you. Publishing a book in the midst of a pandemic is a humbling experience, and all writers who published this year will […]

“I didn’t grow up with my mother,” Mom tells me. We’re sitting on the front verandah looking out at the grass before us wilting in the afternoon sun and the […]

Women’s National Book Association features TEA BY THE SEA: The 2020 Great Group Reads selections have been chosen! This year’s list features books from a wide-range of styles and from […]

5 Books You May Have Missed in June

Each month I comb through hundreds of titles to choose the five I list here, and each month I come up with 30 to 50 that are worthy of consideration. […]

What We Leave Behind: Learning About Resilience From Boney M’s “By the Rivers of Babylon”

Sound falls away, and my immediate surroundings are so quiet it feels life is limited to just two sounds: Boney M’s 1978 hit “By the Rivers of Babylon” playing on […]

PREE Lit: AN INTERVIEW AND COVER REVEAL WITH DONNA HEMANS, AUTHOR OF TEA BY THE SEA

Tea by the Sea, Donna Heman’s second novel, will be published by Red Hen Press in June 2020. The winner of the 2015 JaWS JAMCOPY Lignum Vitae Award for unpublished manuscripts Heman’s […]

Electric Lit: How I Learned to Embrace Jamaican Patois, the Language of My Youth

Fish is what my mother craves after the day’s radiation treatment, and from the passenger seat, she directs me to a roadside shop on the outer edge of Discovery Bay […]

During the ongoing shelter-in-place regime, I should be reading fiction and transporting myself to other worlds that might afford me a semblance of normality or familiarity. But I don’t seem […]

Donna Hemans And TEA BY THE SEA on Wine Women & Writing

Join Pamela Fagan Hutchins for a lovely conversation wtih Donna Hemans about her June 9, 2020 release, TEA BY THE SEA, a lyrical novel about family uniting and unraveling, set […]

It’s been a week since the protests in United States have started to demand justice for all the black lives lost to racist cops’ brutality. Everyone is and should be […]

Poets & Writers: Tea by the Sea

“Eight years of active searching had come to this: an abandoned house, an outdoor stove, and a doll, signs of a former life but necessarily his and hers.” In this […]

Tea by the SeaDonna Hemans (fiction, Red Hen Press)Plum Valentine’s daughter was taken from her the day after the baby was born, snatched, without explanation, by the girl’s father. Seventeen […]

The Rumpus: An Exploration of Belonging

Jamaica-born writer Donna Hemans has been said to hear “life sung by a chorus, not a single voice.” Her plots are as intense as thrillers yet as resonant as poetry, and the lyricism and […]

Washington Independent Review of Books: An Interview with Donna Hemans

At 15, Plum Valentine is banished from her Brooklyn home and sent back to Jamaica by parents nervous about the pernicious effects of the American lifestyle. Once there, her trust […]

Electric Lit: I Can Only Save My Grandparents’ Home by Preserving It in Fiction

In the bedroom of Harlem Renaissance poet Anne Spencer, there’s a mural depicting a well-dressed crowd at a cocktail party pasted to the wall. Spencer’s granddaughter, Shaun Spencer-Hester, points to […]

“But the one thing I know for sure, this is the one life you have and you have to make it work.” Some novels make the meat and bones of […]

A deftly crafted and entertaining work of impressive literary nuance, “Tea by the Sea” by Donna Hemans is an extraordinary, original, and inherently fascinating novel that is especially and unreservedly […]

A new father walks out of the hospital with his day-old baby while the mother recuperates from giving birth. He tells a series of lies and moves houses or countries […]

KIRKUS: Tea by the Sea

A young mother goes on a quest to track down the father of her child, who abducted their baby daughter shortly after her birth. When Plum Valentine is in high […]
Support Red Hen