The Alphabet Conspiracy takes its name from a 1950s -era school filmstrip of the same title. With a cast that includes patron saints for country girls and criminals, a Revolutionary War hero, the Wolfman, a sin-eater, John Wayne, and Johnny Cash, these poems swagger and sulk through an educational film turned film noir, replete with femme fatales in love.

Mark Doty noted that the title poem (published in The Sycamore Review) “artfully addresses itself to the way children are taught to enter—and then [become] trapped by—a world constructed of language.”

Rita Mae Reese digs beneath the surface of dictionary entries to uncover their secrets and to discover some of her own, as in the poem “Womanless,” stemming from a headword in Webster’s Tenth New Collegiate Dictionary for which there is no entry:

And what about me? When I look in a mirror,

I see the parts of a woman; but if womanless

For a few months here—not in paradise of course,

But close enough—until you. Then nothing was close

The Alphabet Conspiracy is about the ways in which language itself can function as a plot, keeping us estranged from ourselves, but also about the way it can be used as a tool for recovering our truest selves. 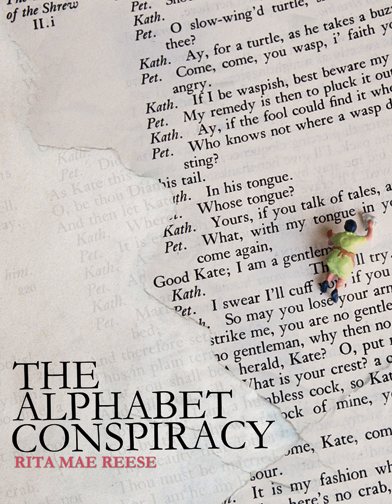 Alphabet Conspiracy featured on The Rumpus

Rita Mae Reese’s new book, The Alphabet Conspiracy, was reviewed on The Rumpus: “But at their best, they speak in deceptively straightforward, accessible language, without aiming to impart lessons to the […]