The Proving Grounds unfolds a narrative not of strict chronology, but rather the way each poem functions as a moment that gathers the thematic clusters of the struggle for identity in a consumer culture that has no sense of intrinsic value and that struggle’s manifestation in the world of athletic performance and the way these general trends interact with individual experience. The poems trace the female body as a primal proving ground where the distance between history and experience form a paradox: the idea that the female body is limited and weak is particularly strange for a narrator who grew up in the generation post-Title IX, when girls were assumed to have the same competencies as men, and who has been called upon to physically shield her mother from her father from the time she was seven. Similarly strange but compelling is the paradox of the deep love for and identification with her father that arises from this first proving ground to shape the rest of her life. 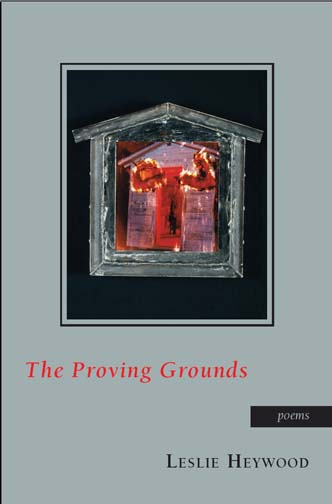 http://edwardbyrne.blogspot.com/2007/04/leslie-heywood-proving-grounds.htmlMONDAY, APRIL 2, 2007Leslie Heywood: THE PROVING GROUNDSLeafing through the work in Leslie Heywood's premiere book of poetry, The Proving Grounds, one quickly becomes accustomed to uncovering sometimes uncomfortable and […]