In the fast-paced, sexy, and very scary literary thriller Ursula Lake, a husband and wife trying to save their marriage and a rock musician trying to get his career back on track find big trouble, natural and possibly supernatural, in the spellbinding wilds of British Columbia.

Former best friends Scott and Errol meet unexpectedly at Oso Lake, a remote Canadian fly-fishing paradise where, five years before, fresh out of college, they had the time of their lives. Their situations, though, have changed, their high hopes quashed by workaday realities and, in Errol’s case, marriage to Claire, who has come with him trying to stave off divorce. But Oso Lake has changed. The fall before, a woman’s severed head was left in a campfire pit beside the lake. The shadow cast by her murder is darkened further by a fire-scarred white truck driver who claims to be a long-dead Native shaman and has plans to eradicate not only Scott, Errol, and Claire, but all of Western civilization. The beauty of the wilderness becomes, every day, more threatening and perverse. But the worst danger the vacationers face may be themselves.

“Nobody handles language like a poet. So whenever I see a novel written by a poet I admire, I know I’m in for a treat. Charles Harper Webb’s Ursula Lake is scary, emotionally wrenching, sexy, tender, and full of natural beauty. It’s also lively, fast-paced, and fun to read as it rips into the comforting lies that prop civilization up. In this novel, Webb shows why he’s won so many writing awards. Take my advice and plunge head-first into Ursula Lake.”
—Ron Koertge, author of Olympusville

“Ursula Lake is a rare novel that is equal parts lyrical and suspenseful. Charles Webb uses his poet’s voice to weave a haunting tale that marries the latent horrors of the natural world to the dark hearts of the humans who inhabit it.”
—Ivy Pochoda, author of These Women 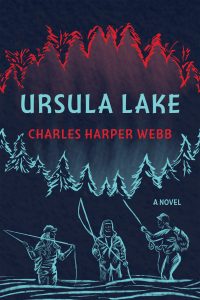 Poet and novelist Charles Harper Webb and host, Lucas Cantor, discuss THE BEST book Cantor’s read for the show. Fools Crow by James Welch. Listen to this show, Or don’t listen to this show. If you’ll do one thing in life, You should read Fool’s Crow.

Charles Harper Webb is a Professor of English at California State University, former psychotherapist, poet, and author. His recent book, Ursula Lake, is a dark and thrilling story about a husband and wife trying to save their marriage and a rock musician trying to get his career back, all centered around a fly fishing trip […]

Charles Harper Webb Interviewed by The Culture Buzz on 98.9 FM!

“His background as an award-winning poet weaves a special storytelling precision as Charles Harper Webb makes his debut as a novelist with Ursula Lake. This thriller delivers a taut, captivating story, rich with its characters, settings and pace.”

Charles Harper Webb writes about the power dynamics of being in a band and how that influenced his book URSULA LAKE, in CrimeReads!

DG: Your upcoming novel is scheduled to be released in May 2022. Without divulging too much, can you give readers a glimpse into the project and possibly also discuss the inspiration behind the work? CHW: The easiest way to answer your first question is to quote the so-called tag-line for the book: “In the fast-paced, […]

My first memory of kindergarten is when I’d made an airplane by crossing two thin cylinders of modeling clay. As I “flew” my plane around the room, a bigger boy with a much sturdier airplane rushed up and slammed his into mine, smashing mine into a blob. He then raced away, laughing as I wailed. If he’d enjoyed smashing […]

Surely one of the most vivid and memorable metaphors in psychology is Carl Jung’s shadow. Similar in many ways to Freud’s “Id,” the term shadow helps us to visualize the way in which troublesome human instincts and impulses may be consigned to darkness within the psyche. I picture a troop of chimpanzees, caged up in the dark, getting more […]

URSULA LAKE gets shout out in Poet Runner podcast!