Vampire Planet is an eclectic, witty, and often moving New & Selected collection of poems from a writer whom former US Poet Laureate Billy Collins calls “the wisest, most entertaining wise guy in American poetry.”

Ron Koertge wants to do nothing but delight. Armed with wit and brains, he introduces readers to Dr. Frankenstein’s frustrated fiancée and gives an alternate reading to the Bible story about Lot’s nameless wife. He rues the loss of a favorite pair of underpants, attends a bachelor party where Mr. Magoo makes an appearance, and suggests what cheerleaders will be like in the future. Death comes home from a business trip to his favorite meal, and Epeius–who designed the Trojan horse–turns out to be a better architect than a warrior. Saint George muses about girls, and on her honeymoon Mrs. Mark Trail wishes her husband would take his eyes off that moose and get down to business. Like Reverend Ike and John Lennon said, “Whatever gets you through the night”–this book will do that and carry you right into the next day. Guaranteed.

“Is anyone writing poems that are as memorable, masterful, and quirky as Ron Koertge’s? If you want the lowdown on Lilith, and if you can bear to read about Lois Lane aging, and if you long to know the unsavory truth about Lazarus after he returned from the dead, this deliciously smart and entertaining collection of poems is the one you’ve been looking for!”—Steve Kowit

“Whimsey meet Oddness. Meet Oddness, Pathos. Hey, Pathos let me introduce you to Funniness. Don’t make fun of her name, though, don’t try to be funny—leave that to her. Fantastical! Say, I’d like you meet Whimsey, Oddness, Pathos and Funniness. (Yeah, shush, we’ve heard that jokestick with the fantastical, O.K.?) Is that . . . ? Look, it’s Ron Koertge, hanging out with Tenderness. Hey Koertge! C’mere, I want you to meet Whimsey, Oddness, Pathos and Fun . . . Oh, you know them already? Oh. You guys know Ron? For a long time? Oh. Yes. Right. I knew that.”—Suzanne Lummis

“Wit, the impeccably dressed and better educated sibling of funny, suffers an unstable reputation: clever yet aloof, socially polished but oddly cold. In the warmer, less formal surroundings of Ron Koertges poems, however, wit lets down its guard and, behold: charm, intelligence, amazing inventiveness, and a kind of sweetness in its patient regard for a world so frequently bereft of those qualities. So what could be more welcome than a new Koertge collection, where wit presides, and wisdom elegantly clothed in laughter is always in attendance.”—B.H. Fairchild

“Ron Koertge is an expert in the art of disorientation. His tongue-in-cheek poems are clever, of course, but they also dispense an unsettling, probably illegal mixture of Novocain and Kool-Aid. When you finish a poem by Koertge, you look around with the sensation that your living room furniture has been rearranged while you were away. This is his long-standing, one-person campaign for wakefulness in the human situation. The New & Selected Poems is a serious cocktail.”—Tony Hoagland

“Many Koertge classics are gathered here (like ‘Coloring’ and ‘Cinderella’s Diary’) alongside new and surprising poems that journey deep into the imagination’s outer limits. Vampire Planet deserves a place in the poetry section of every heads-up reader.”—Billy Collins 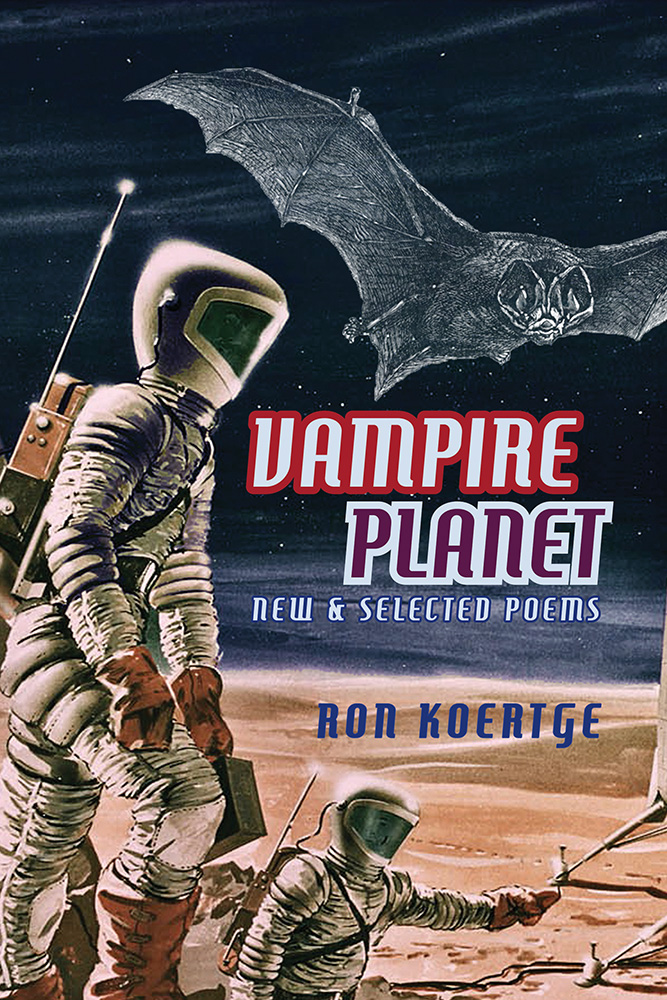