The seventh collection of poetry by seriocomic master William Trowbridge, “One of America’s best and wittiest poets.”

Vanishing Point concerns memory, cognition, history, and morality, as experienced through the process of aging and as seen largely through a seriocomic lens. The range is wide, from arrestingly dark to downright hilarious – sometimes both at once – and all stages in-between. The poet Jim Daniels has said about this book, “With profound wit and humility, with a purity and clarity of language that defines our best poetry, [Trowbridge] takes us on a wild ride and gives us our money’s worth.” The last section contains poems from Trowbridge’s graphic chapbook Oldguy: Superhero, with several new poems added to that series.

William Trowbridge has built a very impressive body of work over the years, and Vanishing Point further establishes him as one of the important voices in American poetry today. With profound wit and humility, with a purity and clarity of language that defines our best poetry, he takes us on a wild ride and gives us our money’s worth.—Jim Daniels

“Distinguished poet William Trowbridge is one of a kind. He thinks far outside the box. His poems probe deeply while entertaining. He will sometimes tread where no one has trod before. He can do scathing sarcasm, poetic pratfalls, and slang. He can also do beautiful. Poems that take on the laughs and disasters of aging are often unexpectedly poignant, and in them, reality is realistic. Younger readers are forewarned. Older ones must nod their heads in agreement. Vanishing Point is a wake-up call. Reading it, we are no longer sleepwalking through our lives. Trowbridge is a fire alarm without the screeching siren. It is not too much to say his poems save us.”—Kelly Cherry, Twelve Women in a Country Called America

“William Trowbridge has long been one of my favorite poets writing in America. His new book Vanishing Point shows me again just how much I have hoped to learn from him. The poems are concise, wry, drolly absurd at times, at other times cheerily self-deprecating (as in the equally delightful and thoughtful “Old Guy” sequence). But the enormous lyric heart beating in this book never wavers, and the portrait of a father home from war is deeply moving, truthful, and occasionally hair-raising. Trowbridge’s poems have a sneaky ease about them, something that only comes with a long and careful mastery of craft. This is a terrific book. You should buy it.”—Erin Belieu

“On one level, the poems in William Trowbridge’s Vanishing Point map a life, through memory, of a keenly observant narrator – a narrator who recalls the complexities of a childhood lived among the wreckage of post-WWII America and an adulthood in the eddies and revolutions that followed (concluding with a wild sequence about the superheroic Oldguy). But Trowbridge’s work goes much deeper than personal memory or fantastical inventiveness. Here, enormous historical forces are always at work in the background, the specters of violence and history – familial, military, social, genocidal – haunting these deft poems. Complex and despairing, sharp and satiric, Vanishing Point is a deeply moving book, one I’ll return to with great pleasure.”—Kevin Prufer 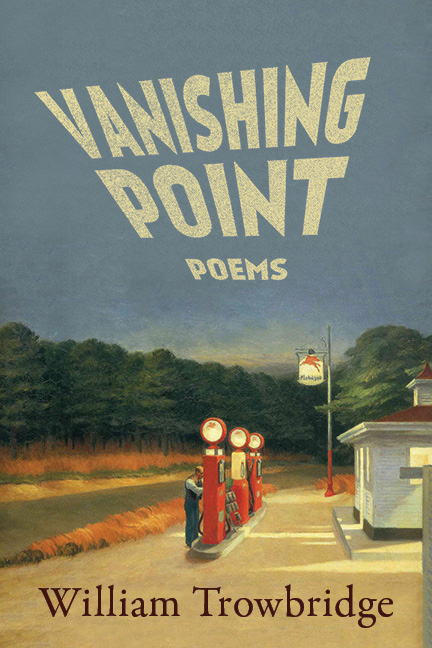