Alfred de Zayas has been professor of international law at the Geneva School of Diplomacy since 2005. He is a retired senior lawyer with the United Nations in Geneva, former Chief of Petitions (registrar) at the Office of the UN High Commissioner for Human Rights, and secretary of UN Human Rights Committee. He has translated of Herman Hesse and Rainer Maria Rilke into English, French, and Spanish. He is president of PEN Centre Suisse romand and coordinator of the three Swiss PEN centers. De Zayas grew up in Chicago and graduated from Brother Rice High School, he earned his JD from Harvard Law School, and is a member of the New York and Florida Bar Associations. He Traveled to Germany on a Fulbright and took a doctorate in history at Gottingen. De Zayas is the author of Nemesis at Potsdam (Routledge 1977), A Terrible Revenge (Macmillan 2006), and The Case-Law of the UN Human Rights Committee 1977-2008, A Handbook (N. P. Engel Publishers, Kehl am Rhein 2009).

The "exquisite illustrations" (Milliken College) of Rilke's Larenopfer were done by Martin Andrysek of Prague. 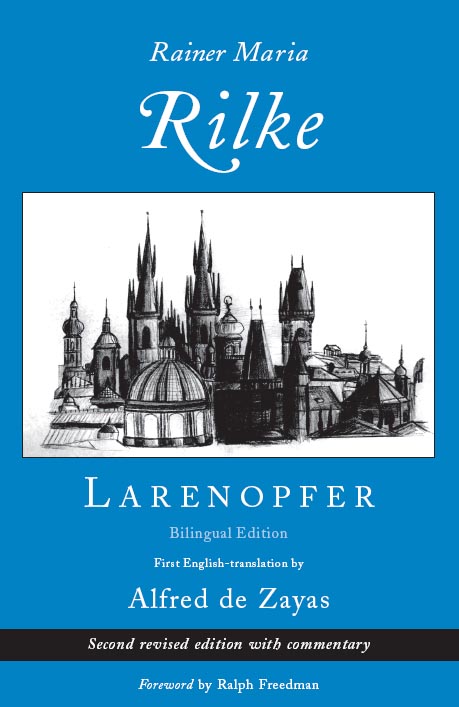 Although his mature poetry has been translated into many languages, his early poetry remains accessible only in the original German. This translation of the Larenopfer, or offerings to the Lares, the Roman household deities, are songs that Rilke sings to his hometown Prague and to his beloved Bohemia, short poems on the parks, fountains, churches, bridges and palaces of Prague, not forgetting Rabbi Löw’s legends, the Jewish cemetery, the Thirty Years’ War and, of course, young love.