Andrew Lam is the author of Perfume Dreams: Reflections on the Vietnamese Diaspora, which won the 2006 PEN Open Book Award, and East Eats West: Writing in Two Hemispheres. Lam is an editor and cofounder of New America Media, an association of over two thousand ethnic media outlets in America.

He was a regular commentator on NPR’s All Things Considered for many years, and was the subject of a 2004 PBS documentary called My Journey Home. His essays have appeared in newspapers and magazines such as the New York Times, The LA Times, the San Francisco Chronicle, The Baltimore Sun, The Atlanta Journal, the Chicago Tribune, Mother Jones, and The Nation, among many others. His short stories have been widely taught and anthologized. Birds of Paradise Lost is his first story collection and due out by Red Hen Press in the spring of 2013. He lives in San Francisco. 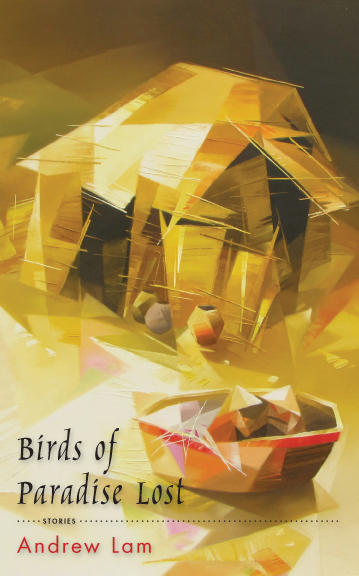 The thirteen stories in Birds of Paradise Lost shimmer with humor and pathos as they chronicle the anguish and joy and bravery of America’s newest Americans, the troubled lives of those who fled Vietnam and remade themselves in the San Francisco Bay Area. The past–memories of war and its aftermath, of murder, arrest, re-education camps and new economic zones, of escape and shipwreck and atrocity–is ever present in these wise and compassionate stories.

The past plays itself out in surprising ways in the lives of people who thought they had moved beyond the nightmares of war and exodus. It comes back on TV in the form of a confession from a cannibal; it enters the Vietnamese restaurant as a Vietnam Vet with a shameful secret; it articulates itself in the peculiar tics of a man with Tourette’s Syndrome who struggles to deal with a profound tragedy. Birds of Paradise Lost is an emotional tour de force, intricately rendering the false starts and revelations in the struggle for integration, and in so doing, the human heart.

Praise for Birds of Paradise Lost:

“Andrew Lam’s Birds of Paradise Lost brilliantly engages the fundamental theme of much great literary work: who am I and what is my place in the universe? His stories are elegant and humane and funny and sad. Lam has instantly established himself as one of our finest fiction writers.”—Robert Olen Butler

“Read Andrew Lam, and bask in his love of language, and his compassion for people, both those here and those from far away. He reminds us that we have history in common; we can laugh and cry together.”—Maxine Hong Kingston

“Grandma is in the freezer, there’s Zoloft in the chicken curry, and a man is on fire in Washington D.C. The immigrant story will never be the same again now that it’s gone through Andrew Lam’s prose – razor-tongued, sophisticated, achingly aware of where it comes from but never imprisoned by its memory. Lam takes the traditional immigrant story and set it ablaze and then serenely rescues from its burning embers what had been there all along – the all-American story.”—Sandip Roy, commentator, Morning Edition, National Public Radio

“The 13 stories in Andrew Lam’s Birds of Paradise Lost soar like birds in mid-flight, bridging the space between the dreamscape of Vietnam and the glass and steel of “Gold Mountain””—Thuy Dinh, Shelf Awareness

“Lam crystallizes the tension of immigration—the pull between wanting to hold onto the old world while needing to accept the strangeness of the new—with sensitivity, beauty, and yet with a welcome lack of sentimentality or bathos.”—Nina Sankovitch, Huffington Post

“Several decades have passed since harrowing and miraculous tales of ‘boat people’ splashed across the headlines. In the eclectic and engrossing collection of short stories by Andrew Lam, readers are bound to rediscover a profound sense of awe at the vastness of such journeys, both literal and metaphorical, from Vietnam to America.”—Elizabeth Rosner, The San Francisco Chronicle

“One of Lam’s greatest gifts is his ventriloquist-like ability to get inside each narrator’s skin. Just as Lam connects with and penetrates each persona, so too each persona achieves a moment that bridges or leaps the gap between our two cultures, forever wedded by the tragic war.”—Randy Fertel, Kenyon Review

In Andrew Lam’s “Birds of Paradise Lost” and Viet Thanh Nguyen’s “The Immolation,” the act of self-immolation is perceived differently by members of the first-generation and second-generation Vietnamese Americans. In a larger context, both stories demonstrate how violent memory threatens familial harmony yet fosters a sense of community among Vietnamese Americans. Furthermore, the narratives address […]

Vietnamese-American writer Andrew Lam considers Paradise Lost “the first refugee story.” “When I learned about it, as someone who had lost his homeland, it resonated, naturally, because Vietnam was everything to my family and I, and then it was gone,” he said. Lam left Vietnam as a refugee at age 11, two days before the fall of […]

Oakland author Andrew Lam spoke at the Oakland Asian Cultural Center October 3rd, discussing his experiences growing up as a Vietnamese-American refugee in the United States. "The sense of being displaced continued to form everything that I write," he said during the poignant event. Read more about the event and his experiences at

Congratulations to Andrew Lam! His book Birds of Paradise Lost is on the shortlist for the William Saroyan International Prize for Writing. Lam's book placed in the Fiction category shortlist. The award is named after William Saroyan, a Pulitzer Prize and Academy Award-winning American writer and playwright, best known for his short stories about humorous […]

Andrew Lam's debut novel Birds of Paradise Lost is a finalist in the 83rd Annual California Book Awards. His book is one of two finalists in the First Fiction category. The California Book Awards are one of the oldest literary awards in the nation. They strive to annually recognize the state’s best writers and illuminate […]

Journalist Jenny Chen for Asian Fortune News sat down with Red Hen author Andrew Lam to discuss his short story collection Birds of Paradise. In the interview, Lam discusses an array of topics, including the difficulties of writing fiction, his experiences as a Vietnamese immigrant in the United States, and Vietnamese diaspora. Lam states in the […]