Chandra Prasad is the author, most recently, of On Borrowed Wings (Simon & Schuster), a novel set in Depression-era Connecticut. NPR’s Faith Middleton calls the novel a story of “race, class, gender, and family–though you so root for the young woman’s dream that you don’t notice until the novel is done. That’s great, believable storytelling.”

Prasad is the originator and editor of, and a contributor to, Mixed, an anthology of fiction published to international acclaim published by W.W. Norton. A combination of Indian, Italian, Swedish, and English, Prasad drew inspiration from her own multiracial identity in assembling the book, which includes material by Danzy Senna, Rebecca Walker, Ruth Ozeki, and Mat Johnson, among others. Bliss Broyard praises the anthology as “nuanced, thoughtful, and deeply human.”

Always interested in issues of identity, Prasad decided that the circus, with its motley cast and unusual pecking order would be the perfect setting for another one of her books: Death of a Circus (Red Hen). Before writing, Prasad spent months researching traveling shows of the early twentieth century and speaking with circus historians and present-day performers. The result, says Tom Perrotta, is a work of fiction brimming with “Dickensian verve, a keen eye for historical detail, and lots of heart.” Booklist says the book is “richly textured” and “packed with glamour and grit.” 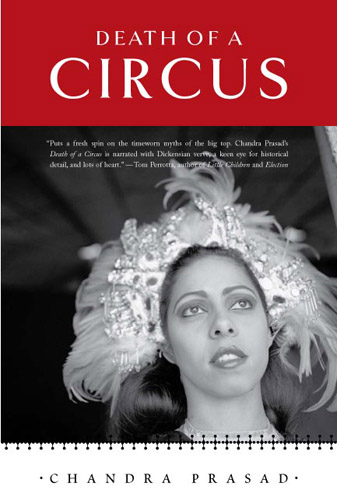 Death of a Circus

Death of a Circus tells the story of the Bringlebright Circus, a small fictional troupe traveling the United States in the early twentieth century, an era when circuses are falling out of favor and only the largest shows are enduring. Initially, the book follows Lor Cole, a young African American man from Connecticut who dreams of leaving behind his provincial past and making a name for himself as a high wire walker. Upon joining Bringlebright, however, Lor quickly learns that the characters who join him under the Big Top have their own stories to tell.

Closest to Lor is Cirella Flannery, a beautiful and startlingly devious fire-eater who has struggled for survival since her spirited days in a juvenile detention facility. Ranju, Bringlebright’s reclusive chief animal trainer, hides a history of magic and trickery that may be his undoing. Stalwart, Ranju’s young protege, finds solace in his journal even as he grapples with a mysterious connection to Lor. Presiding over the show is Mr. Barnacle, the Ringmaster, a charlatan who constantly concocts new stratagems to keep Bringlebright afloat. Together, these performers create a colorful ensemble that illuminates the twin sides of the show: one rapturously razzle-dazzle, the other rough-and-tumble.

Death of a Circus is a novel of multiple narrative lines. It captures the rapid pacing of an adventure story, but it is ultimately much more. Chock full of circus allusions, Big Top lingo, folklore and historical detail, it is a far-reaching fairy tale that speaks to the foibles of the human heart and what happens when life is lived both within and outside the center ring spotlight.