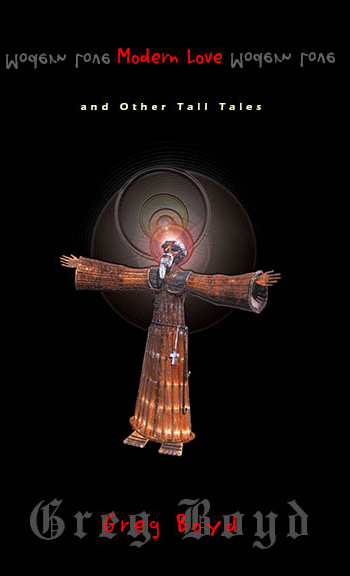 Modern Love and Other Tall Tales

A review of Modern Love and Other Tall Tales:

With prose as clean as Hemingway’s and a Kafka-esque sense of the absurd, Greg Boyd delivers a memorable book in Modern Love and Other Tall Tales. But these tales are not quite so “tall” as the title might suggest; in fact, their distinction lies in the way they negotiate a fine line between veracity and the farcical.

Each narrator seems to fancy himself “the rational one” while elaborating the most bizarre situation with little or no comment. Boyd exploits this irony by mingling a crushing sense of isolation with a host of eccentric, straight-faced characters whose predicaments become the reader’s source of stupefaction and endless mirth. In “Horny,” a man walks around town carrying a heavy wood cross on his back, convinced that suffering will erase his primal instincts; “listen” is a one-sided conversation in which the narrator formulates a sad and defensive logic that falls on dead ears or—as one might imagine—no ears at all; and “The Further Adventures of Tom, Huck, and Jim” transports Twain’s classic characters to Southern California and brings us hilariously up to date.

But Modern Love isn’t just one laugh after another. Though Boyd makes light of unfortunate circumstances, there is an underlying feeling of loneliness and sadness throughout, as if his characters’ idiosyncrasies were born from an acute sense of helplessness or an inability to participate in or relate to typical activities. The characters themselves seem real but flimsy, as if they will at any moment be blown off the page by a Kafkan ill wind, as if they were all once, as in “Unglued,” “shy and sickly, largely ignored by the other children.”

Boyd’s writing, like his characters, is straightforward and descriptive. There’s no need for verbal trickery here because the author’s imagination provides us with more than enough to digest. In Modern Love it’s quite possible to become so engrossed in a story that you forget you’re actually reading at all.