Maurya Simon is the author of The Enchanted Room and Days of Awe (Copper Canyon Press 1986, 1989); Speaking in Tongues (Gibbs Smith 1990), which was nominated for a Pulitzer Prize; and The Golden Labyrinth (University of Missouri Press 1995). A fifth volume, A Brief History of Punctuation, was published in a limited edition by the fine letterpress book publisher Sutton Hoo Press in 2002. Simon’s book, Ghost Orchid (Red Hen Press 2004) was nominated for a 2004 National Book Award in Poetry. Another limited edition letterpress collection of ekphrastic poems, WEAVERS, based on the paintings of Los Angeles artist Baila Goldenthal, was published by Blackbird Press in October 2005, and Simon’s eighth volume of poems, Cartographies: Uncollected Poems, 1980-2005, was published in 2008 by Red Hen Press. Her ninth volume, The Raindrop’s Gospel: The Trials of St. Jerome and St. Paula, is forthcoming from Elixir Press in 2010. Tamar, an opera based on Simon’s eponymous verse libretto, had its world premier at the University of Rhode Island in the spring of 2007.

Simon has been the recipient of a 2002 and 2008 Visiting Artist Fellowships from the American Academy in Rome, a 2000 NEA Fellowship in poetry, a University Award from the Academy of American Poets, the Celia B. Wagner and Lucille Medwick Memorial Awards from the Poetry Society of America, and a Fulbright/Indo-American Fellowship in Bangalore, India. Simon has also been a fellow at Hawthornden Castle in Edinburgh, Scotland, and at the Baltic Centre for Writers and Translators in Visby, Sweden, as well as a lecturer at Lund University in Sweden. Her poems have appeared in the New Yorker, Poetry, TriQuarterly, the Southern Review, the Kenyon Review, the Georgia Review, the Gettysburg Review, Grand Street, Agni, Ploughshares, Shenandoah, the Los Angeles Times Book Review, the New England Review, and in more than fifty anthologies. Simon’s poetry has been translated into French, Rumanian, Bengali, Spanish, and Farsi.

Simon teaches in the creative writing department at the University of California, Riverside. She lives in the Angeles National Forest of the San Gabriel Mountains in Southern California. 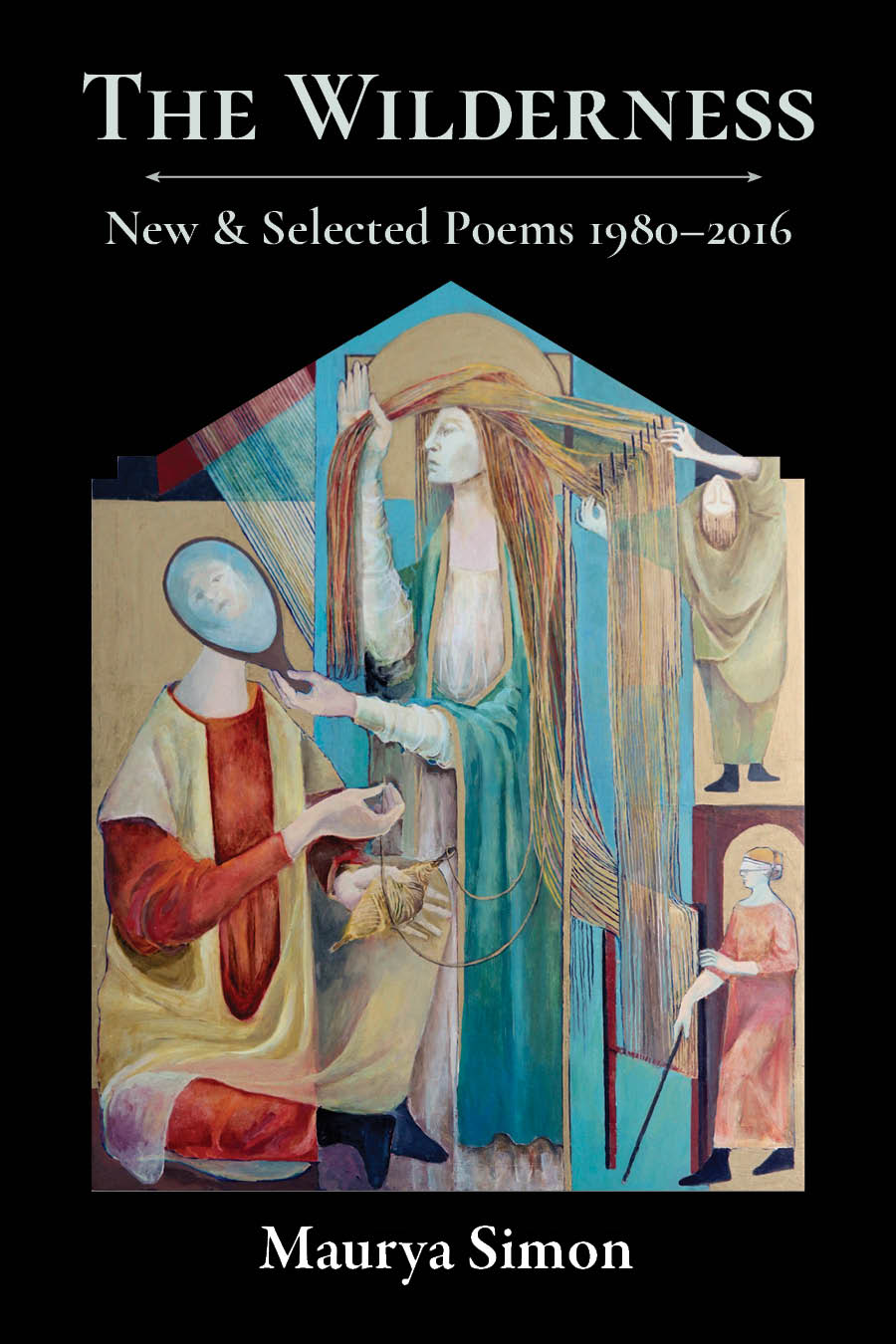 The Wilderness: New and Selected Poems compiles more than thirty years of Maurya Simon’s poetic oeuvre. Her poems combine compelling investigations of the natural world with a sense of spirituality and a modern-day metaphysical sensibility. Simon’s writing is lucid and deeply moving, as well as being enriched by history, the classics, and visual art. These are poems that should be read, reread, and savored for the wisdom they impart and for their rich insights into the human condition. This beautiful book is illustrated with seventeen evocative, color-saturated paintings from the WEAVERS SERIES by Los Angeles artist, Baila Goldenthal.

“Maurya Simon’s language is lush, dense, sensual, and framed by a dazzling intellect. In this her New and Selected Poems we come to see the full power of her symphonic sweep and the sheer dynamism of her compositional slant―riffs, play, improvisation, harmonic resonance―yet the resolve is always there, always a breathless moment. . . . Maurya Simon’s œuvre is a deliberate world of grace, awe, beauty, delight, and wonder. In these poems you will find rest, comfort, deep questions, some discomfort, but always joy. Read this book―you will be grateful for it.”―Chris Abani, author of Sanctificum and Hands Washing Water

“The Wilderness is nothing short of astonishing. Maurya Simon is a poet for the ages, an exuberant chronicler of moments large and small who discovers at every turn new ways of illuminating the sum of her experience, and in this new and selected edition of work gathered over many decades she reveals herself to be in the grip of what Wallace Stevens called ‘the necessary angel of earth’―the one who helps us to see the world around us in all its resplendent glory.”―Christopher Merrill, author of Self-Portrait with Dogwood

“Maurya Simon’s is one of the strongest, most humane, imaginative, compassionate, and flat-out brilliant voices of her generation.”―Richard Tillinghast

The poems in Cartographies travel new territory, exploring the heart’s changeable geography and the soul’s uneven terrain. They map the familiar, sometimes astonishing, and always complex world of the poet’s native San Gabriel Mountains, as well as nearby Los Angeles, with its cultural richness and social/political tensions. Divided into four sections–The Soul, The Self, Mountains, The City–Cartographies investigates and fathoms our most profound relationships with time, nature, love, and death. In poem after poem, Simon finds meaning in unexpected locales, from a hospital AIDS ward to the “Rorschach” on a butterfly’s wings to a barrio bakery, and in the briefest of moments, evoked by the plaintive voice of a spider, or provoked by a breathless escape from an avalanche. With clarity and eloquence, these poems dramatize the persistent paradoxes present in our daily lives, those interstices of yearning and mourning, fear and celebration, or anguish and amazement that reveal the deep wells and turbulence of human consciousness. With consummate craftsmanship and inner grace, Simon apprehends the elegiac within the purest moments of joy, and intimates catharsis within despair. She opens the mind’s windows to myriad small miracles provoked by the barest glimmers of wonder and hope. 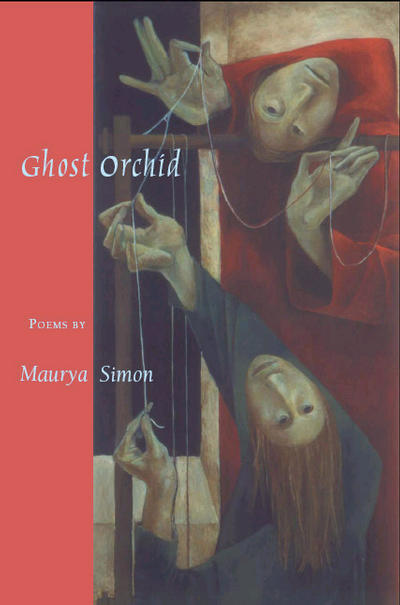 For what does the spirit yearn? To know God. Maurya Simon’s wonderful new book, Ghost Orchid, throws fresh light on that traditional question and answer in poems full of the sensuous language of the “Song of Songs” and the graphic images of modern disaffection. She shows us good and evil, both conscious and unconscious, and, even as she doubts such a reality, asks for God’s “touch upon our waking lives.” The yearning to know God, the legacy of human generations, has its latest expression in these ravishing poems.

I had two reasons for enrolling in Pitzer College in 1978: to finally complete my B.A. and to study with poet Bert Meyers, whose poetry had knocked me off my feet. It had been nearly ten years since I’d been an undergrad at U.C. Berkeley, and returning to college as a twenty-seven-year-old mother of two […]

Memory is fickle, quixotic and slippery as an eel. It latches itself onto strong emotions like fear, anger, or surprise and it won’t let go. Up until adolescence, children often think their parents are invincible, possibly immortal. They’re celestial gods who’ve mysteriously landed on Earth. It’s a cruel loss of innocence to eventually see their […]

In 1987, when I was three years out of graduate school and expanding my views of contemporary American poetics, I undertook an eight-hour interview, comprised of four two-hour sessions, with my former Pomona College English professor, renowned poet Robert Mezey. Each session of our interview began with the poet’s arrival at my cabin high up […]

Maurya Simon writes about poetry as a way of saving vibrant memories for Press Enterprise!

It was while my family and I were living in Paris in the mid-1950s that I decided to become a poet. I wrote my first poem there, moved by the storybook spectacle of an elaborate wedding procession we encountered one autumn day. Consequently, this vocation seemed more than just a dreamy possibility: it somehow felt […]

THE WILDERNESS poet Maurya Simon wrote an article featured in THE PRESS-ENTERPRISE!

Author Maurya Simon recently published an article on “poets in society” in The Press-Enterprise.

Our hopes are reborn in spring, and as winter’s cold winds morph into April’s warming breezes, we may experience a quickening of our pulses, a lightening of our steps. But have no doubt: We’re aware of the preceding dark months through which we’ve suffered, of the myriad sorrows our nation’s endured during our still ongoing […]

By Maurya Simon Carved as the keystone in this Welsh church, she presides over penitents who see, when gazing upward towards some god or stars, a nude woman with bent knees spread-eagled, using her hands to open her vulva’s doorway. Check out the full poem recently published in the Manhattanville Review here!

Maurya Simon: On Some Hand-Me-Downs from G-d

Well, mortality’s one of the cloaks you tossed in the bin, as well as sin, I suppose, and all this endless yearning for some divine inspiration. You also tossed forgivenessinto the Goodwill box, so casually I’d have thought it wasa pair of dirty socks. But there’s another inheritance Iguess I ought to thank you for–faith–though it’s wornso […]

Maurya Simon reads poems from The Wilderness: New & Selected Poems 1980-2016 (2018). This reading was originally given with Peggy Shumaker as the inaugural reading in the Tom Sanders Memorial Reading Series.

Maurya Simon’s The Wilderness: New and Selected Poems 1980-2016 (Red Hen Press 2018, 218 pages) represents a life of questioning and perception, whether the scene is a backyard or a street in Bangalore or the ekphrastic poems of The Weavers or reflections on sinners and saints. Her life has encompassed years in India, fellowships in Rome, and an unconventional […]