Peggy Shumaker was born in La Mesa, California, and grew up in Tucson, Arizona. She earned her BA in English and MFA in creative writing from the University of Arizona. Shumaker was writer-in-residence for the Arizona Commission on the Arts, working with prison inmates, honors students, gang members, deaf adults, teen parents, little kids, library patrons, and elderly folks. She has given readings in art galleries, a governor’s mansion, a clearing in the woods, an abandoned bank, on reservations, in libraries, at a gold dredge, under the hoodoos at Bryce Canyon, on a riverboat, and at many bookstores, community centers, and universities.

Peggy Shumaker’s newest book of poems is Toucan Nest. Red Hen Press will release it in 2013. Red Hen Press also published Gnawed Bones, a meditation on mortality, and Blaze, a book of Shumaker’s poems and Kesler Woodward’s paintings. University of Nebraska Press brought out Just Breathe Normally in 2007, a book of brief lyric nonfiction. Her previous books include Underground Rivers (Red Hen Press 2002), Wings Moist from the Other World (University of Pittsburgh Press 1994),The Circle of Totems (University of Pittsburgh Press 1988), Braided River (Limner Press 1993), and Esperanza’s Hair (University of Alabama Press 1985). Her poems have been published in Russia, Japan, Australia, New Zealand, Canada, England, and throughout the United States. Her nonfiction has appeared in Short Takes: Brief Encounters with Contemporary Nonfiction (Norton 2005), A Road of Her Own (Fulcrum 2002), Under Northern Lights (University of Washington Press, 2000), A Year in Place (University of Utah Press 2001), Prairie Schooner and Ascent.

Shumaker is founding editor of Boreal Books, an imprint of Red Hen Press, which publishes literature and fine art from Alaska. www.borealbooks.org.

Shumaker won a poetry fellowship from the National Endowment for the Arts and several awards for teaching. She served as poet-in-residence at the Stadler Center for Poetry at Bucknell University and as president of the Board of Directors of the Associated Writing Programs. Professor emerita from University of Alaska Fairbanks, Shumaker was chair of the English department and director of the MFA program in creative writing. She currently teaches in the Low-Residency Rainier Writing Workshop. Peggy Shumaker and her husband, Joe Usibelli, live in Fairbanks, Alaska, and travel widely. 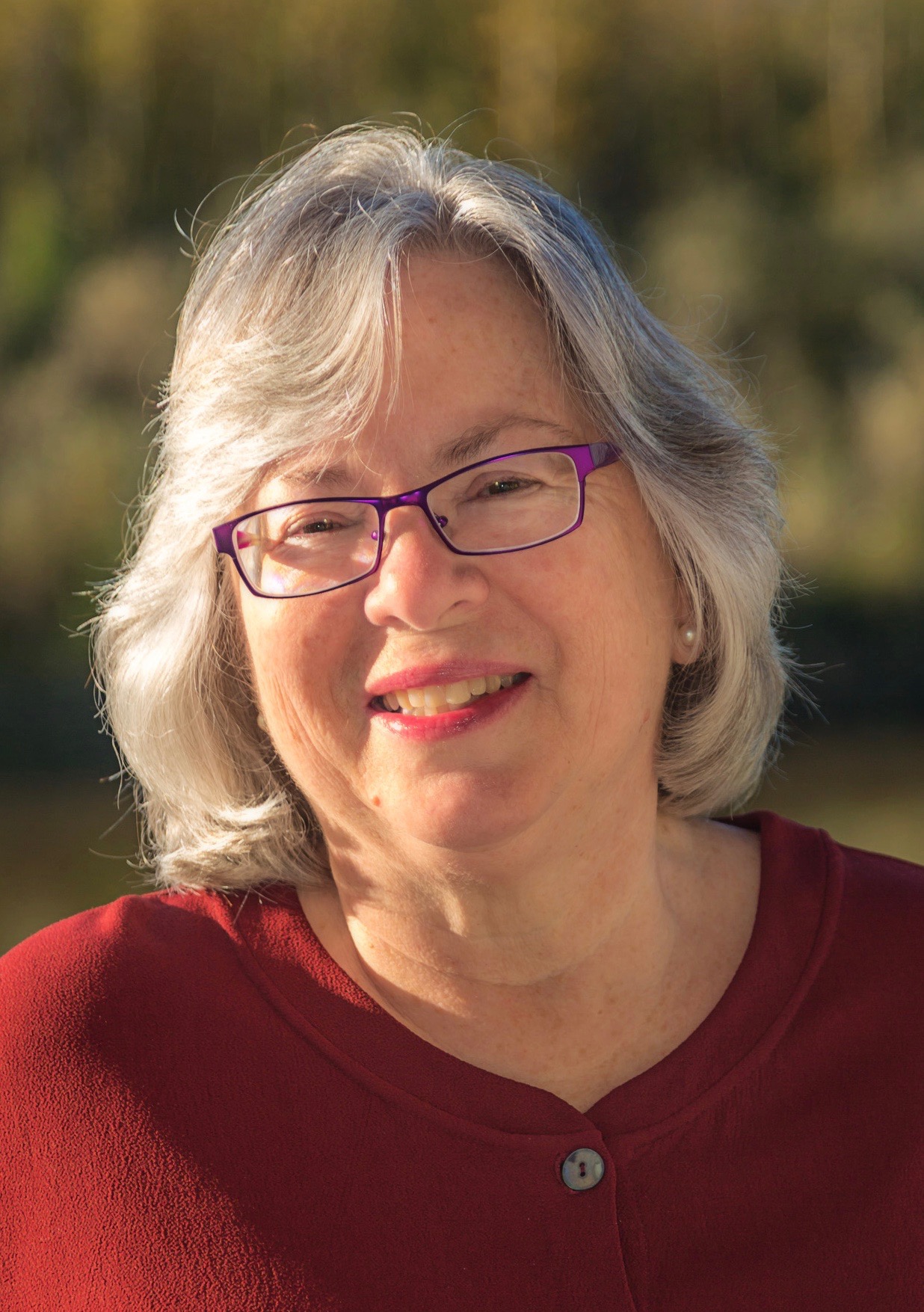 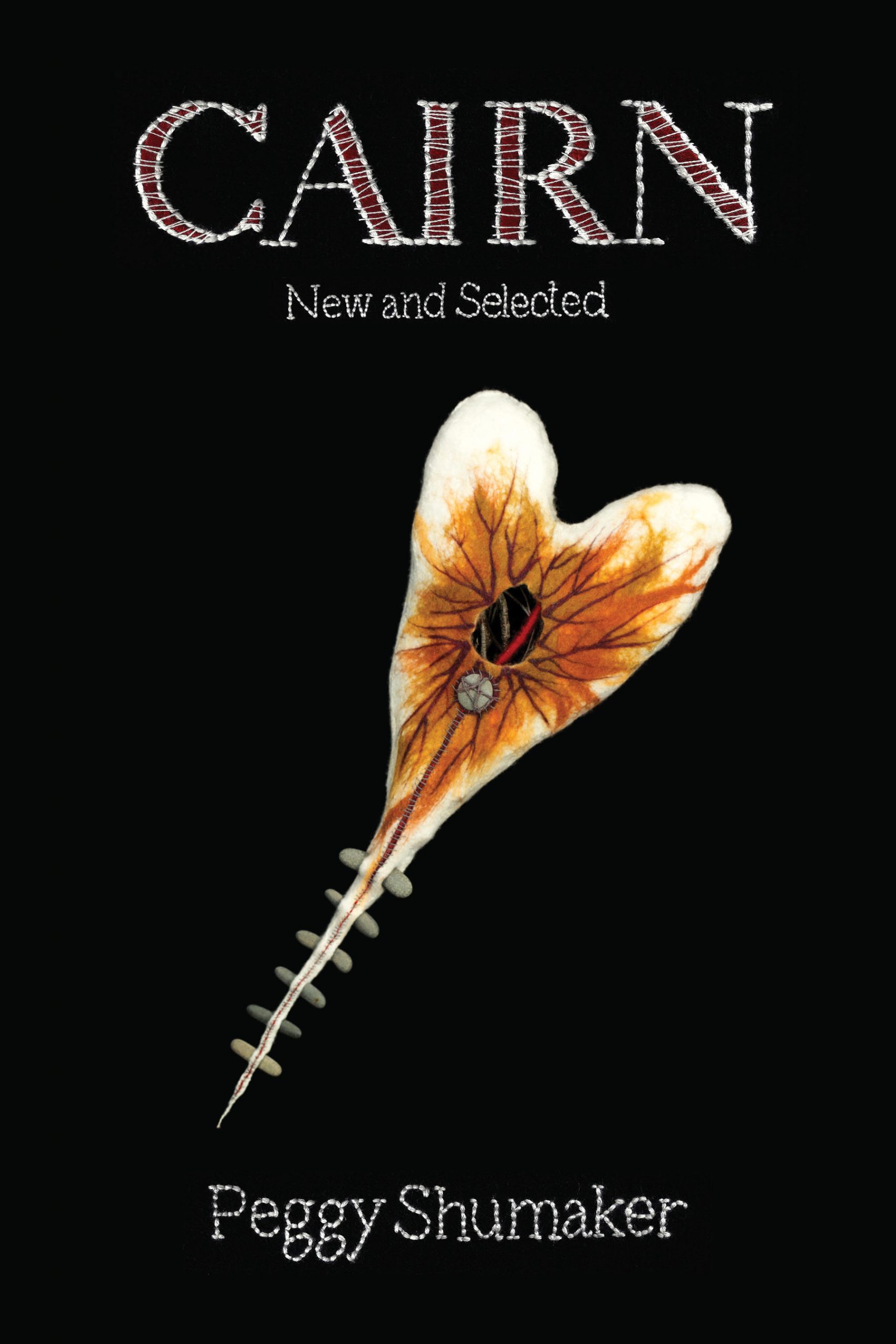 Chosen with care, this volume represents forty years of poems and prose by Peggy Shumaker. Her distinctive cadences give voice to the landscapes and people of Alaska and Arizona. This work leads us deep into what remains unresolved, savoring mysteries of heart, mind, and soul. Matters of life and death, these poems embody exuberance and struggle and generosity.

“Brilliant book! Note how often Peggy Shumaker, profoundly wise and tender poet, writes ‘in honor’ of something or someone else – has there ever been a more generous soul?  These poems of many decades invoke so many rich worlds of being…her elegant spirit and voice turn us all back into the more lyrical people we might be. It is her ongoing gift, and our treasure.”
—Naomi Shihab Nye

“Early on in Cairn, Peggy Shumaker asks: Who are we without language? And I respond: Who are we without this poet’s language, a tongue that often seems to be oracle, speaking to us from a parallel world? In this treasure trove of poetry and short prose that spans decades of her writing life, Shumaker re-shapes our perception of how we move through our lives and the lives of others. As an added bonus, we’re allowed behind the scenes of her collaboration with the painter Kesler Woodard, complete with the gorgeous paintings that emerged from this conversation between two consummate artists. In all her work, Shumaker grounds us in the present moment, while also allowing us to look up and see: ‘The view/vast/beyond us.'”—Brenda Miller

“If you read only a single volume of poetry this year, may it be Peggy Shumaker’s transcendent and luminous Cairn: New & Selected Poems.  Traversing more than thirty years of the poet’s life in letters, Cairn offers readers a panoply of lyric inner and outer journeys—from Arizona’s deserts to Hawaii and Costa Rica’s tropics to Alaska’s frozen expanses and beyond. Simultaneously, Shumaker charts hauntingly resonant losses, both communal and personal, wisdom rooted in her love of nature, and myriad joys arising from the bonds of friendship and love.

With a clarity and sparseness rivaling Dickinson’s, the resilience and poetic mastery of Kumin, and the lucidity, honesty, and dignity of Szymborska, Shumaker proves herself to be one of this generation’s most distinctive poetic voices. Treasure this urgently beautiful and necessary book, for it expresses the complexity of our lives with virtuosic skill, intimacy, and enlightenment.”—Maurya Simon 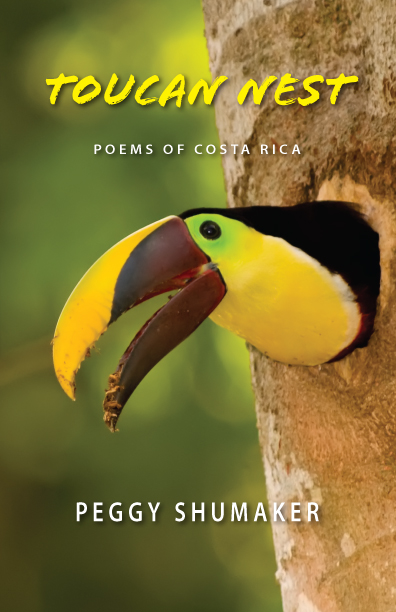 What happens when we enter unfamiliar realms, when we open ourselves to the unknown? Sometimes that not-knowing makes art possible. In Toucan Nest, the eighth book by Alaska State Writer Laureate Peggy Shumaker, her first vivid encounters with the rainforests of Costa Rica–with its basilisk lizards, bats, and bromeliads, its crocodiles, sloths, and strangler figs–refresh and renew our world in a work of startlingly beautiful mindfulness and imagination.


“This is a book of burnished, lapidary attention. Its poems—vibrant with seeing, quickened with soundwork, subtled by insight—peel open landscapes both outer and inner. The costs of our human presence and extractions are in these pages, but also the radiant return of human awareness. Toucan Nest is a unique account of encounter, imaginative inquiry, and expansion.”—Jane Hirshfield, author of After and Given Sugar, Given Salt


“Shumaker’s vivid Toucan Nest is about learning to see—Costa Rica serving as the textbook. Between the parentheses of arrival and departure, the pages burst with lessons—rich, beautiful, and sometimes terrifying. For us, looking over her shoulder, it is education by proxy. So iridescent is Shumaker’s language, we are there, floating downriver with the crocodiles, watching panicky iguanas hustling from a fire, the basilisk lizard “zipping / zigzag on hind legs,” a flash of green and ruby eyes, and oh, did you hear it? the love cry of the jaguar and the cry of the quetzal whose morning song brings the whole blessed world to life. A dazzle of a book.”—Alice Friman, author of Vinculum, The Book of the Rotten Daughter, and
Inverted Fire 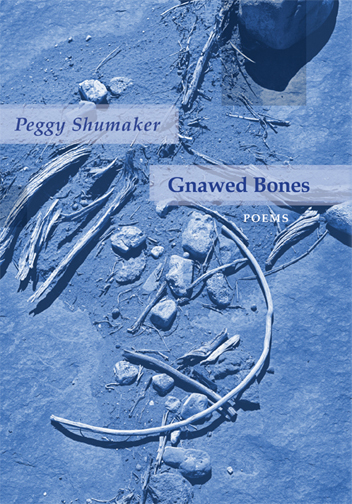 From wildfire and war to bleached reefs and human frailty, Peggy Shumaker’s new poems meditate on mortality. Her poems speak with elegaic force for lost languages, lost ancestors, lost ways of being. This work sharpens the edges of our perception, drawing on the inner life, on secrets that keep us alive. With language as lyrical as the natural world, the poems in Gnawed Bones nourish us.

“Peggy Shumaker’s sixth full-length collection, Gnawed Bones, is perhaps her finest. Shumaker . . . covers a wide range—but she casts a far more personal eye, worrying at the puzzle of human relationships as well as human connection to the land itself.”—Judith Kitchen, The Georgia Review

“. . .poems like Gnawed Bones posit the natural world as humankind’s most fundamental origin, the source of literary invention as well as personal loss. . . . desolate landscapes and sweeping vistas initiate the full range of human experience, which in turn gives way to artistic expression.  Gnawed Bones is distinguished by its attempts to situate even everyday speech within the harmonious ebb and flow of the natural world.” —Kristina Marie Darling, The Gettysburg Review

“Her newest collection, Gnawed Bones, is infused with her generosity and a tenderness that is all-encompassing. Shumaker’s vision casts a wide net—Alaska, Hawaii, the past, the present, art, wildfire, death—nothing is excluded. . . . The grace that is so much Peggy Shumaker’s hallmark is the keystone of the collection. It is like having a tour guide who sees the world with eyes that cherish. Even pain, even sorrow is luminous when held up to the light of Peggy’s eyes.”—Erin Hollowell, Being Poetry, April 25, 2010 (read entire entry)

“Good heavens, what a book. No, rather good earth, good sad mortal body, what a book. Shumaker writes without blame, but with utter clarity and precision and story-telling skill about places on earth and our place among them—Alaska, Hawaii, the saguaro-studded desert—and about foxes, deer, swallows, who co-inhabit with us “under a sun / more agitated / this year than the last,” then about the father who wanted to fly, the mother who wanted to die. Finally she comes to her own brush with death. I couldn’t stop reading, sometimes weeping, always awed. Whatever Shumaker touches is thick with life, death, and the blessing of her words.”—Alicia Ostriker 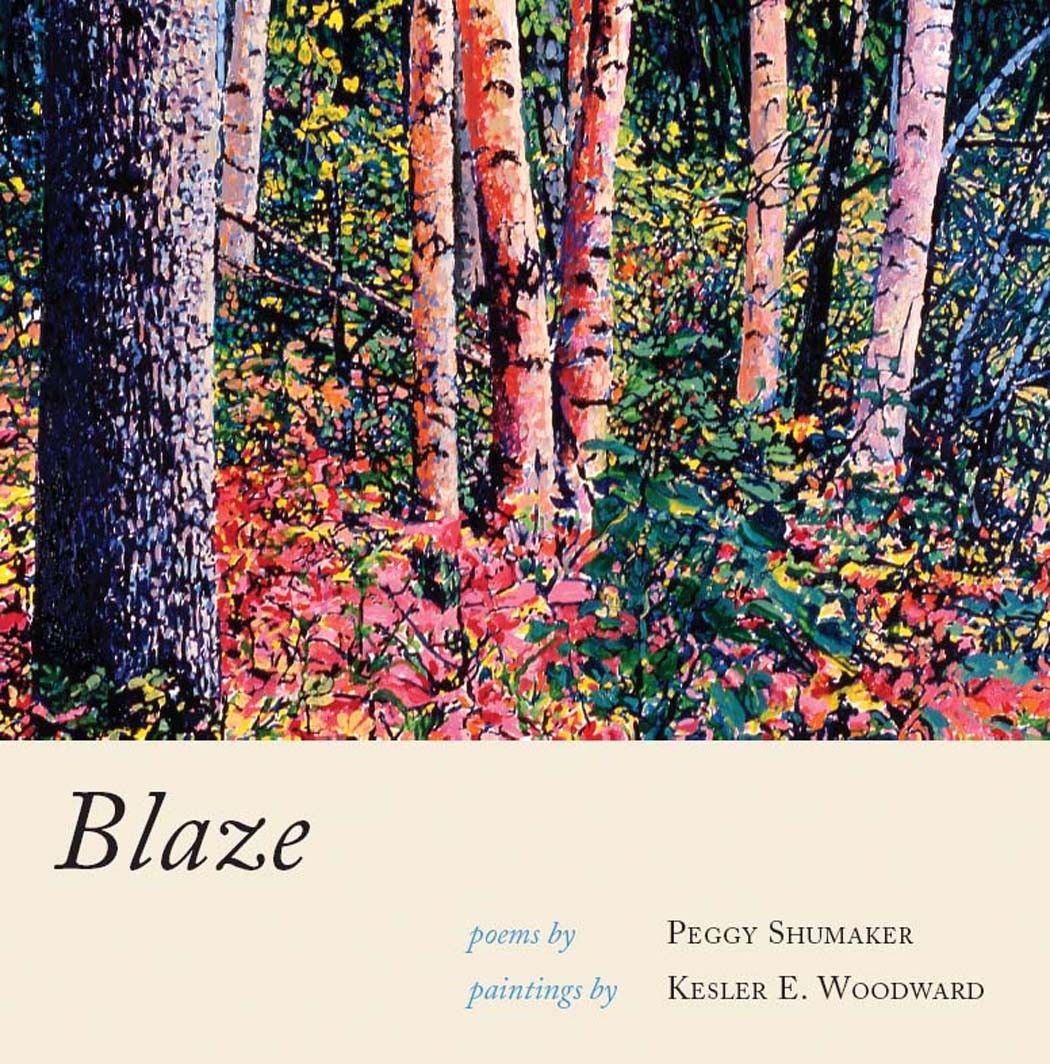 Savoring Alaskan landscapes by way of birch trees has become Kes Woodward’s trademark. This collection brings together thirty years of his birch portraits and forest close-ups. Over the same thirty years, poet Peggy Shumaker has traveled inner landscapes via images drawn from two deserts—the Sonoran and the subarctic. Her poems embody the harsh beauty of heat and cold, the force of true extremes. Wounded trees, marked paths, slashes of color. Bursts of passion, licks of flame. The sensual spirits of two imaginations at work fuel this volume. 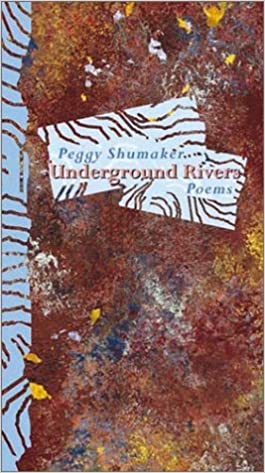 “With rare insight, clarity, and grace, Peggy Shumaker charts both the minutiae of miniature lives and the grand and cosmic movements affecting earth’s more imposing denizens. She tracks the profound and subtle dislocations or illuminations of self inspired by the closest regard of our natural world. This volume brims with the gifts and losses, struggles and triumphs that the poet gleans from nature, and which both instruct and sustain us all. Bearing an exquisite beauty and purity, these poems soar.”—Maurya Simon, author of Days of Awe and The Golden Labyrinth

“I doubt that I can praise a poet more highly.”—David Lee

The coming-of-age story of four boys in the High Country of western North Carolina after World War II, “The Falls of the Wyona” is a poignant, lyrical novella by Akron […]

Artsmith announced Peggy Shumaker as their Artist of the Year! This honor is given to an artist who "exemplifies mastery in her or his field and generosity to others." Congratulations […]

I went on this journey, to be sure, knowing where I was headed. The historical part wasn’t that historical to my frame of reference; the queer part contained my frame […]