Ruth Irupe Sanabria’s first collection of poetry, The Strange House Testifies (Bilingual Press), won second place (Poetry) in the 2010 Annual Latino Book Awards. Her second collection of poems received the 2014 Letras Latinas/Red Hen Press Award and will be published in 2017. Her poems have appeared in journals such as Women Writing Resistance and U.S. Latino Literature Today. Most recently, her essays, poems, and short stories have been published in translation in Argentina. She has read her poetry in libraries, prisons, schools, parks, bars, and universities across the USA, Argentina, Mexico, and Peru.

Sanabria’s poetry explores themes of human rights and injustice, children as witnesses to state terror, and the role of art in resistance. Her commitment to these themes stems from her personal experience during Argentina’s military dictatorship (1976 to 1983). In 2013, she had the opportunity to testify in the trials against the Fifth Army Corps in Bahia Blanca who kidnapped her parents in 1977. Though Sanabria’s maternal grandparents recovered her from a neighbor?s house, her parents remained “disappeared” in clandestine concentration camps where they were tortured for several months. She learned that they were still alive when news arrived that the military had transferred her parents to separate prisons and incarcerated them without trial.

On December 23, 1979, Ruth Irupe and her mother, author and human rights activist Alicia Partnoy, were reunited as political refugees in Seattle, Washington, where her father had been exiled to a few months earlier. She spent her childhood between Seattle and Washington D.C., surrounded by a cadre of activist tias and tios, grass-roots organizers, artists, and progressive thinkers. Sanabria credits her grandmother, painter and humanist Raquel Partnoy, for teaching her, during the years of censorship and terror, the liberating power of art and metaphor. Over the past decade, she has been fortunate to travel across the country giving readings with her grandmother and mother blending their essays, stories, music, poetry, film and visual art to raise awareness of genocide in Latin America.

After a brief stint as paralegal for Legal Services of New Jersey, Sanabria forewent law school for the pursuit of creative writing and education. She obtained her MFA from NYU and began teaching creative writing workshops in colleges and public schools. Currently, Sanabria teaches English literature to public high school students in New Jersey. 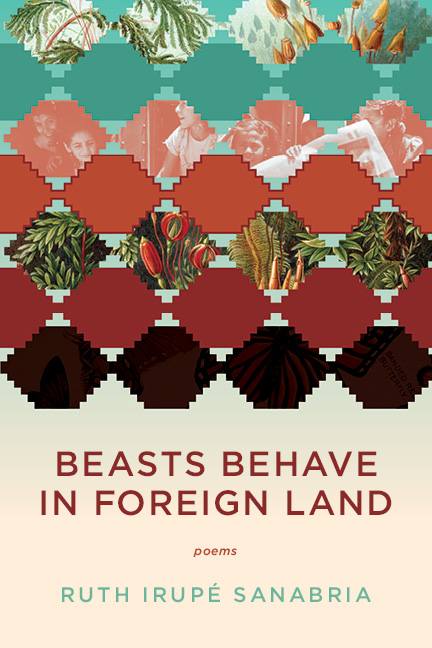 Drawing on her personal experience during Argentina’s military dictatorship (1976 to 1983), these poems emerge from the defining moment in which she had the opportunity to testify in the trials against the Fifth Army Corps in Bahia Blanca, thirty-seven years after soldiers kidnapped, tortured, and imprisoned her parents. Weaving metaphor, ekphrasis, and voice, Sanabria’s poems pay tribute to the ways women in her family use art, music, and testimony to process the unspeakable and confront profound loss. Written in two sections and set in various cities throughout Argentina and the United States, the poems in Beasts Behave in Foreign Land explore the insistence and resiliency of love.

Maintaining her commitment to themes of human rights and Latina/o identity found in her first collection of poetry, The Strange House Testifies, Ruth Irupé Sanabria sharpens her focus on the child as witness and on the ways families who have survived genocide negotiate memory, political urgency, and identity without negating or silencing each other. To this end, Sanabria opens the first section of her collection of forty-eight poems by playing with the intertextual relationships between her own work and the works of her mother, author Alicia Partnoy, and her grandmother, painter, Raquel Partnoy. At times ironic and even humorous, the voices in these image-driven poems are determined to find peace, wholeness and understanding. The second section of Beasts Behave in Foreign Land is set primarily between Washington DC, and New Jersey. Mother and grandmother retreat to the background, allowing for the emergence of friends and lovers, who, much like the voices in the previous section, are driven by the desire to save and be saved by love.

“Part prayer. Part testimony. All heart. Beasts Behave in Foreign Land refuses to lie down and be quiet, refuses to compromise beauty or the beast: the beast we carry within, the one forged in us through multiple denials. This book, with its confident and competent voice and diverse ways of seeing, leads us into and out of the labyrinth of the self and the labyrinths of history – presents herstory with its torture and song. This book sings. This book tells the truth, the truth of ‘our vacuous beginning on the highway / and the big inevitable bang.'”—Lorna Dee Cervantes

“Memory after memory, gesture after gesture, Beasts Behave in Foreign Land is an exquisite chronicle of insistent survival, a matrilineal journey of decades and thousands of miles between Argentina and New Jersey. Ruth Irupé Sanabria masterfully juxtaposes the plain language of government-sanctioned violence, the inheritance of its physical and psychological toll upon politicized bodies, against the language of nature and innocence. Listen for these voices: the voices of Ruth’s family, the voices of hard-earned wisdom, the voices of three generations of women artists in conversation – mother and daughter, daughter and mother, daughter and grandmother (in a series of stunning ekphrastics). Rooted in a contemplative present, weighted in stark and singular memory, these poems bequeath resistance – love in the face of extinction – to generations to come.”—Rich Villar, essayist/poet/activist, author of Comprehending Forever

“‘Heart, I’ve confused you with a tambourine again,’ writes Ruth Irupé Sanabria in the title poem of this wrenching, startling collection. The poet writes from the collective experience of crimes against humanity in Argentina, where a military dictatorship disappeared countless thousands, her mother included. This is a landscape of nightmares, of ‘headless uncles,’ yet, time and again Sanabria summons the courage to testify, to speak on behalf of the ghosts, living and dead, to name the assassins. That she speaks from the perspective of a child, wondering about the whereabouts of her mother even as the adults distract her with chocolate and steaming milk, makes these poems all the more haunting and moving. She shakes life from that tambourine heart, rising above the violence done to body and spirit, eloquently articulating humanity in the face of inhumanity. Ruth Irupé Sanabria offers proof that human beings can make poetry out of anything, no matter how ravaged the heart may be, telling the stories embedded in the skin and bone, burnishing the shards of memory till they gleam brightly.”—Martín Espada

Ruth Irupé Sanabria was recently featured on Poetry Foundation's website with her poem Ars Poetica, which is found in her book Beasts Behave in Foreign Land, which was published by Red Hen Press earlier this year. https://www.poetryfoundation.org/poems/143487/ars-poetica-59566e44cd87b