Sarah Bein, a native Angelino, received her M.D. from Stanford University. She is the author of two collections of poetry, This Quiet Sun and Instead of Indonesia, both published by Red Hen Press, and written before the age of seventeen.

Her current book, entitled Thirty-Three Hats for Julia, is being released by Red Hen Press in January of 2008, and is her first work combining the topics of illness and doctoring into the medium of poetry.

She is the recipient of several grants, including two Stanford University School of Medicine Arts and Humanities Scholars Grants as well as a Katherine McKormack Traveling Grant. She is one of the recipients of the Lenore Marshall Barnard Prize for Poetry as well as the Rainer Maria Rilke Award for Young Poets

Her poetry has appeared in both medical and literary journals, including JAMA, British Medical Journal, The Healing Muse, Eclipse, and PoetryMagazine.com. She has presented her work at NYU’s Medical Humanities conference and led a workshop entitled Creative Writing as a Lifelong Reflective Tool for Physicians, and has taught several small classes on the subject of Poetry and Medicine.

Sarah’s books have been taught at numerous universities including Boston University, and several Universities in Southern California.

She currently practices medicine in Los Angeles and continues to write poetry. 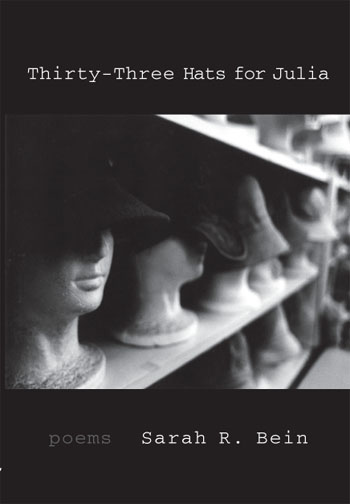 Thirty-Three Hats for Julia, the latest book by poet-physician Dr. Sarah Bein is slated for release by Red Hen Press in January of 2008. This book chronicles Dr. Bein’s experience in medical school at Stanford University and into residency at UCLA, traversing the space between illness and health.

Her interest in medicine since the beginning of her career has been with those patients who endure chronic or life-limiting illness, which brought forth her story about Julia, detailed in a prose piece which comprises the third section of this book and is the book’s namesake.

Julia is a girl whose final days she shares, recounting the most sacred moments of her life, as well as conjuring the now-ghosts of a future she will not see. In her thoughts we see her attempt at reason; she looks in metaphor, verse, and abstraction for a cause, an explanation for this last role she plays. She relishes in narrative, in the narrative of her own life and the lives she would have lived, her thirty-three hats. This is where Dr. Bein’s narrative takes on that transformative capacity in its power to invent, through imagination, and with hope, to heal.

“The poems in this collection, all written before Sarah was seventeen, move with the singular grace of a much older, wiser person. It is as if young Sarah dipped herself in the tangled threads that carry children to adulthood and came up dancing, holding out these poems to us, something like a talisman, something like a gift. One reads in astonishment, ones reads and breathes deeply.”—Kate Gale, author of Where Crows and Men Collide

I met Martha Cooley in 1999 when, as a then-visiting writer in the Bennington MFA program, she gave a series of lectures, one of which covered Milan Kundera. Martha joined Bennington’s fiction faculty, teaching in the program for fifteen years; I was fortunate to study with her there. I was taken by Martha’s crisp, incisive […]

Martha Cooley in conversation with LARB on her novel BUY ME LOVE!

This is not a spoiler, I promise it isn’t, only just consider for a moment: Say you buy a lottery ticket — have you ever? — say you do, just one time. Say the jackpot is $100 million, and you win! You’re holding a ticket worth a hundred million dollars! What would you do? How would you be? That’s […]

Wilson’s guest on Delmarva Today is Cécile Barlier to discuss her new book of short stories A Gypsy’s Book of Revelation. Barlier was born in France and received her master’s degree from the Sorbonne University in Paris. She has lived for over 20 years in the United States and has published extensively in English including in […]

A GYPSY’S BOOK OF REVELATION & AMERICAN QUASAR featured in this months issue of ShelfUnbound!

Take a look at the cover! It may share some resemblance to the cover of A Gypsy’s Book of Revelation! Also don’t forget to read the in-depth interviews with the authors below, Cécile Barlier, David Campos, & Maceo Montoya.

Thank you for the shout-outs Matt Witt! You can check out his full blog where he presents his photography and film/books/music you may have missed!

On a damp afternoon a few years ago, descending a stone ramp adjacent to a cobblestone lane, I slipped on a slick patch. Landing on my seat, I bounced upward and sideways off the ramp, rather like a cartoon character. After somehow revolving in midair, I descended to the lane beneath the ramp, where I […]

BUY ME LOVE by Martha Cooley Reviewed in Foreword Reviews!

In Martha Cooley’s novel Buy Me Love, a woman’s lottery win reveals her complicated relationships with money, family, and art. Read the rest of the review here!

Martha Cooley’s title for her latest novel is a predicate. A main verb and direct object, to be precise, its three words at once call to mind the subject and more, at least for the many millions with a fondness for the Beatles. The missing words “Money Can’t” function like a ghost limb for Buy Me Love⎯ and I […]

Cécile Barlier’s A GYPSY’S BOOK OF REVELATION Reviewed by the SF Chronicle!

Though a newcomer to the genre, Bay Area author Cécile Barlier shows a mastery of the form with this visceral and eclectic debut. In stories that span from the harrowing and macabre to the outlandish and amusing, she turns everyday situations into playgrounds for literary experimentation. Read more here!

Cooley (The Archivist) examines the unexpected aftermath of a lottery win in her sharp latest. Click here to read more!