Veronica Golos is the author of Vocabulary of Silence (Red Hen Press, 2/11). An exploration of war and its witnessing-from-afar, “Golos takes the fragments, the bits and pieces that reach us from the battlefield, and weaves them with a morality and a sorrow,” states writer and journalist Barbara Nimri Aziz.

Veronica Golos’ first book, A Bell Buried Deep, co-winner of the 16th Annual Nicholas Roerich Poetry Prize (Story Line Press), was nominated for a 2004 Pushcart Prize by Edward Hirsch, and adapted for stage at the Claremont School of Theology in Claremont, California.

Poems from Golos’ 1999 chapbook, No Ordinary Women, were performed as HER: A Poetry Drama at the Pulse Theatre on New York’s 42nd Street. The poem “Letting Go,” featured in the Po’Jazz CD “From the Hollow,” was nominated as Best Spoken Word Song by the music organization Just Plain Folks.

In 2002, Veronica co-founded The Domino Effect, a multiracial quartet of spoken word artists. Their collaboration led to the poetry/drama, Evolving Into Skin, which premiered at the H.E.R.E. Theatre in New York.

From 1999-2003, Golos worked as the Artistic Director for Literary Programs at the Sol Goldman 14th Street Y in NYC, where she curated the series, WhYwords, the recipient of many awards, including the Axe Houghton Foundation Grant and ERCA Creative Achievement Award.

Ms. Golos has taught poetry and multi-genre writing for Poets & Writers, Poets House, and the 92nd St Y/Makor and the New York City Public Libraries. Her courses included Breakin’ the Rules!, poetry for teens and pre-teens; Creative Writing & the Use of Years, memoir for seniors; I Am More Than This, a workshop for Holocaust survivors at the Nassau County Holocaust Museum. She was Poet in Residence at Sacred Heart Academy in Greenwich, CT in 2005, at the Nassau Museum of Art, and Yaxche School in Taos, New Mexico. She has lectured on Teaching Poetry to Children at Columbia University’s Teacher’s College and Colorado State College.

Golos was a 2003 and 2005 recipient of artist residencies at the Wurlitzer Foundation of Taos, New Mexico. In 2009, her poetry was the centerpiece of My Land is Me, a four-artist multimedia exhibit at the RANE Gallery in Taos, New Mexico that questioned the western view of the Veil. The “veil poems” appear in Vocabulary of Silence.

Golos’ work has been widely published and anthologized nationally and internationally, including Meridians, Drunken Boat, Orbus (London), and Liquor44 (Paris). She has performed at the Nuyorican Cafe, Lincoln Center, and Cornelia Street Cafe in NYC, and many venues in the Southwest. A lifelong activist for social justice, humanitarian and peace causes, Golos uses her poetry not only to interpret and question but “to challenge and act.” 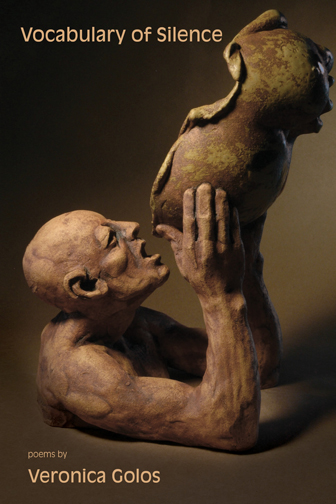 Poet Veronica Golos has created a conundrum—a vocabulary of silence that acts as a kind of zen koan for the reader: a negative space, an echo chamber, a mirror. Witnessing from afar the continuing wars in Iraq and Afghanistan conducted by the country in which she lives, the poet also witnesses herself, and struggles to find words to carry the weight of her felt responsibility. Ms. Golos then empties her beautifully wrought poems into the vast silence, filling it with the names of the dead and the living.

Red Hen would like to congratulate Veronica Golos, was chosen a winner the 2011 New Mexico Book Awards for her poetry collection Vocabulary of Silence (Red Hen Press, 2011). The NM Book Awards recognizes the best books in New Mexico and the Southwest. View the New Mexico Book Co-op's complete list of finalists

Write On Online has a great new interview with Veronica Golos talking about her poetry, including her newest collection Vocabulary of Silence. She talks about her career as a writer and offers advice as well as inspirations for her poetry. "In terms of influences, I think they are the 'poets of conscience' 'witness poets' 'poets […]