Nickole Brown writes in a voice that is simultaneously vernacular and lyrical. It is a voice thick with the humidity and whirring cicadas of Kentucky, but the poems are dangerous, smelling of the crisp cucumber scent of a copperhead about to strike. Epistolary in nature, and with a novel’s arc, Sister is a story that begins with a teen giving birth to a baby girl the narrator during a tornado, and in some ways, that tornado never ends.

In the hands of a lesser poet, this debut collection would be a standard-issue confession, a melodramatic exercise in anger and self-pity. But melodrama requires simple villains and victims, and there is neither in this richly complex portrait. Ultimately, Sister is more about the narrator’s transgressions and failures, more about her relationships to her sister and their mother than about that which divided them. With equal parts sass and sorrow, these poems etch out survival won not with tender-hearted reflections but by smoking cigarettes through fly-specked screens, by using cans of aerosol hair spray as a makeshift flamethrowers, and, most cruelly, by leaving home and trying to forget her sister entirely. From there, each poem is a letter of explanation and apology to that younger sister she never knew.

Sister recounts a return to a place that Brown never truly left. It is a book of forgiveness, of seeking what is beyond mere survival, of finding your way out of a place of poverty and abuse only to realize that you must go back again, all the way back to where everything began?that warm, dark nest of mother. 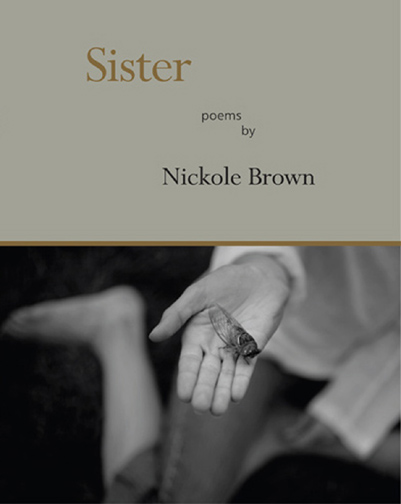 “Frankness and love are brought together with Brown’s brilliant combination of the sacred and vernacular. . . . Brown alternates the poems’ shapes on the page, giving us the sense […]

“In her debut collection, Brown weaves poetic phrases to take her readers on a journey that satisfies from the initiation to the conclusion, as she enlightens about the dysfunctional yet […]

"In the debut collection from Kentucky poet Nickole Brown, readers experience the pleasures of poetry "the illuminated moment reverberating" as well as the pleasures of the novel–the narrative unfurling, driven […]

"If you feel that high emotion and unalienated confession is not art, as Slavoj Zizek might assert that it cops to the System where the individual is valued for trying […]

"Brown's awareness of the book's form, its how in addition to its what, allows for these poems' rich complexities. The order not only forms a linear narrative, but layers experience. […]

"The strength of Sister is in the details, some of which are constructed through Brown's diction, which is gently infused with a southern dialect but resists caricature. She writes of […]

"To write of one's own conception, gestation, birth"to write convincingly of unknowable-yet-familiar moments: that is the power of poetry and the power of Nickole Brown's debut, Sister, a self-styled "novel-in-poems.' […]

"Nickole Brown's poems marry an enthralling and tormented narrative with woven, specific lyricism to create a layered progression through a difficult past. Brown has immediate access to how the situations […]

"Using umbilicus as guide rail, the speaker of Nickole Brown's Sister–an unflinching and deeply intelligent first book–undertakes a hair-lifting expedition back to her childhood so as to return herself to […]

"It would be easy to say that this collection is an indictment, but there is nothing easy about these poems. They are each skillfully wrought pieces about impossible subjects. . […]

"Brown's forthright debut opens with an intimate address to a sister: "I tell you this story because it is / the story we need / to believe our offal is […]