Sansei Amy Uyematsu’s The Yellow Door celebrates her Japanese-American roots and the profound changes that have occurred in her lifetime. As a woman born after World War II, her six decades in Los Angeles are captured in verse that link Hokusai woodblack paintings, her grandparents’ journeys to California, church parties playing Motown music, and Buddhist obon festivals. With the color yellow as a running theme, Uyematsu embraces “the idea of being a curious, sometimes furious yellow.” A genuine product of the sixties, she adds her own unique LA Buddhahead twist to Asian American identity in the twentieth and twenty-first centuries.

“The Yellow Door is both an exuberant and heartfelt dialogue between the poet’s past and present. Amy Uyematsu, now a grandmother herself, now stands in the middle of five generations, pondering decisions made by her immigrant grandparents as well as her younger self. The role of yellow in forming and reforming Uyematsu’s ethnic and political consciousness is explored ferociously without apology. Once viewing herself as an outsider, Uyematsu has found freedom to truly dance. A pitch-perfect collection by one of LA’s finest poets.”—Naomi Hirahara, Edgar Award, winning novelist

“The Yellow Door is a mature and ambitious book, unapologetic about identity politics and peopled with literary friends of the Asian-American movement and other vivid ‘historicized’ apparitions. Charlie Chan, relocation camps, Executive Order 9066, sansei brides . . . all the familiar movement monikers will make the reader nostalgic for her activist past. . . . Sigh, those were the days when social protest really mattered! A thoroughly compelling read! An enthusiastic ‘thumbs up!'”—Marilyn Chin

“Amy Uyematsu holds nothing back in this insightful, compelling and poetic narrative that gives a personal voice to the history of our nation’s Asian-American citizens. Indeed, there are poems of struggle and pain here, but also of humor and joy, for at the heart of this work is the love, honor and rightful pride of a Japanese-American poet whose commitment to freedom and justice combines with dignity and compassion as she unflinchingly engages the world that brings itself to her door. I am terrifically moved by this work.”—Peter Levitt, Recipient of the Lannan Foundation Award in Poetry

“Amy Uyematsu is one of LA’s best poets, one of our most necessary voices. The Yellow Door takes us on neighborhood walks and beach walks along the Pacific and across generations, enjambing eras and pungent seasons in a phrase, granitic continents and the salt of history folded in the creases of caesura. I’m grateful for this book, which I receive like a bowl offered redolent and steaming with both hands.”—Sesshu Foster 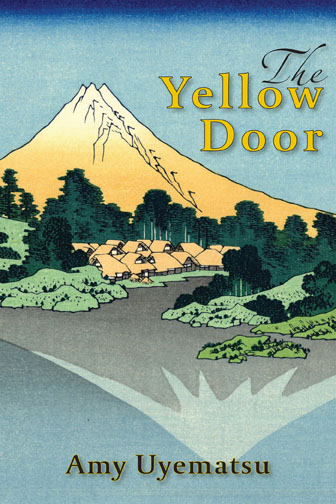 Amy Uyematsu's deft blending of the personal, political, and spiritual has given the Asian-American experience one of its most consistently eloquent voices and earned her poetry a national reputation. In […]

Poet, Michael Dennis, reviewed Amy Uyematsu’s The Yellow Door on his blog recently. For his daily book of poetry, he focused on how The Yellow Door shares lessons that we need to remember and […]

"Journey through a post-war Japanese American landscape with Amy Uyematsu as she defines race, unpacks the family incarceration experience and discovers a confluence with Japanese culture in “The Yellow Door,” […]

Jeannine Hall Gailey from The Rumpus wrote a great review about her excitement on reading Amy Uyematsu's The Yellow Door. "The Yellow Door continues Uyematsu’s tradition of strikingly-crafted lyric poetry, […]

Congratulations to Amy Uyematsu for this fabulous review by Lee Rossi for The Pedestal Magazine! "This new book contains many of the characteristic pleasures of her writing—precise diction, keen awareness […]